You know the feeling when you listen to a song for the first time in your life and you realize that it starts to fill an empty space inside you which you were not aware of until that moment. It is a mystery how you survived until this day without knowing about it. Well, HOB is that song for me now.

HOB has landed on PC and PlayStation 4 just a few days ago, thanks to Runic Games. You know the studio with their famous hack and slash titles, Torchlight and Torchlight II.

It is dangerous to go alone, take my arm! 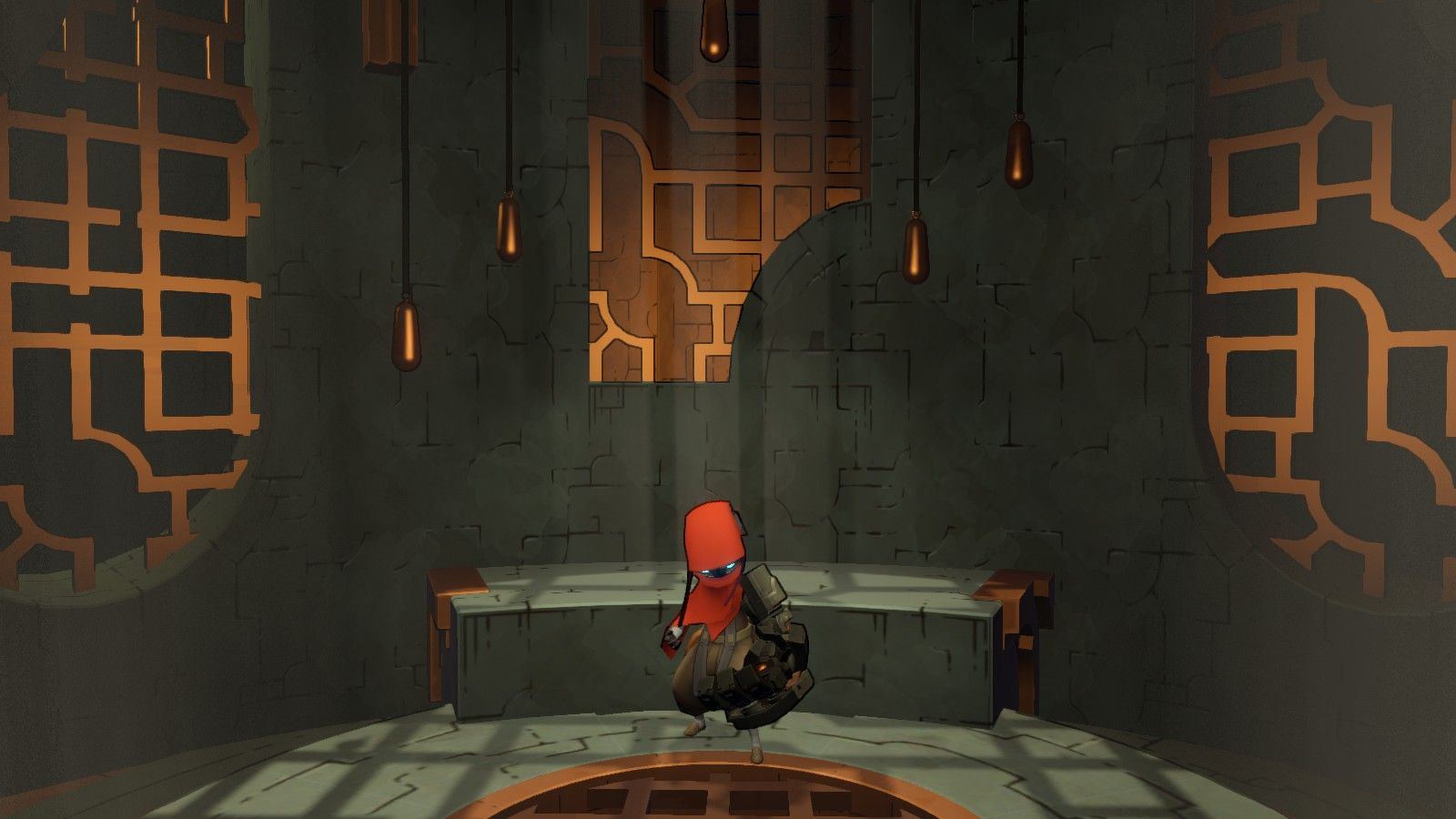 You start HOB knowing nothing about the story of it. This strategy will not work the same on many games, but HOB is so cleverly designed, you thank the developers for not knowing anything about it. You just know that the story will be revealed to you as you make progress.

Before any ado, I must make it clear that HOB features no text or dialogue. Everything is for you to see, hear and understand without a narrative. So you can understand when I say that I was a little bit worried about it when I first started playing the game and later, I was shocked by how successfully they achieved that.

As the hooded protagonist, you start the game while following the robot companion of yours through the beautifully designed world of HOB. You have two normal arms for now, but things are about to change. Following your companion here and there will give you some clues about how to play the game since there is no narrative to tell you any of it. After a series of unfortunate events, you end up losing our arm, yet you now have a robotic arm with super-powers, so there is nothing to worry about except the pain, I guess. They call it a glove-arm, yet there is no arm in it. Now you are upset, but life is like that. Would you like a robot with a human arm? Maybe in HOB II.

After the events which make you capable of surviving in the world of HOB, you start your journey. This brand new arm of yours is so good, you don’t worry about the previous one anymore. You know that this is the arm you need and deserve and you step into the mysterious world of the game.

Would you kindly sit and admire the environment for a while? 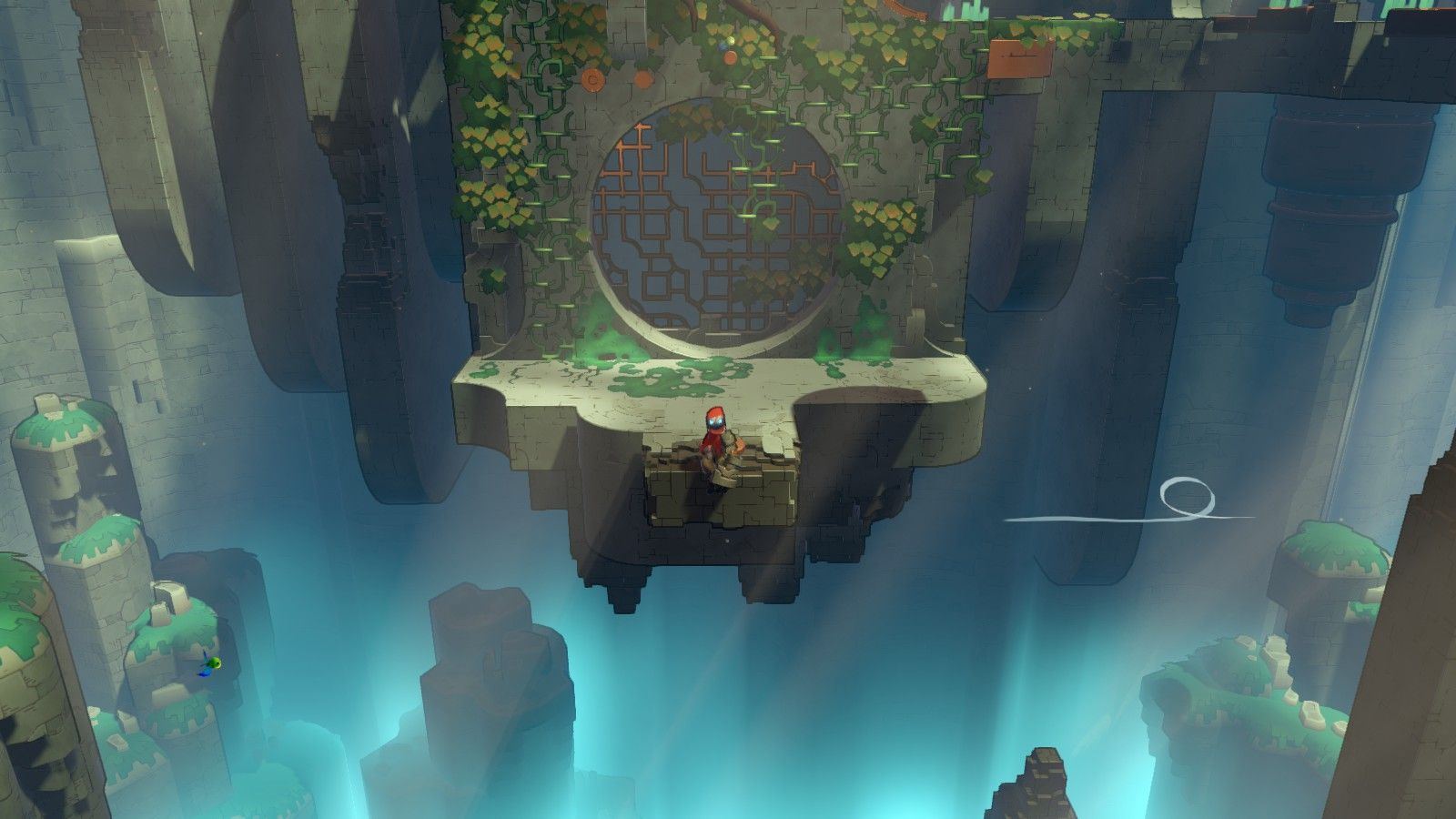 The charming environment of the game is not something you can look over. It is something you can admire and cherish. Developers know that, they were so sure of that, they added some view points to the game so you can sit and enjoy it. We created something gorgeous, would you like to sit here for a while and admire it?

Everything in this game, every little bits and pieces of it will lead you to one thing. Shaping the world of HOB. Don’t think it like the way you interact with the world. No, you alter  this world. You change, shape, shift and move this world. After all, HOB is a action/adventure puzzle platformer game and the term “platformer” gains another meaning with HOB.

Again, the glove-arm thing will be your key to solve the mystery of the game. While interacting with the world of HOB, it becomes crucial. Only this arm can open some areas, break down walls, climb and even kill enemies in cold blood. A cold-blooded arm, it is. This arm of yours can be upgraded with blueprints and enhancements. An underground lair hides and provides you a device to upgrade the arm. In order to upgrade, you need resources which can be found in monoliths scattered around the world. You can upgrade it to have a shield, more powerful attacks and such.

Even when it is not upgraded, your fist is powerful enough to break walls and let you go places you can not go with your biological arm which is rotting somewhere, missing you. I get emotional when it comes to severed body parts, y’know… Anyway, with a charged-fist, you can tore your enemies apart. There is a gore option on the menu by the way and I highly recommend you to activate it before starting (if you are not underage, of course). In this charming and warm environment, you will be surprised how it rains blood, body parts and teeth when you kill an enemy.

The main idea behind HOB is to gain access to secret and protected places with the help of your fist, shape and shift the world so you can continue, fix some parts and pieces so you can shape the world and understand what happened and what is now happening to the world of the game. Fix the world, shape the world. The most important parts of the game are hidden underground. So, without no doubt, I can say that if you see a way to go down, go down where everything is more fun.

The ground and the underground, both features mechanisms which are unique to HOB. This game’s world works in a different but fantastic way you’ve never seen before. It is jaw-dropping how it changes with your actions.

When it comes to map, I can say that it is easy to understand. I easily get lost in games, so you can trust me in this. There is a well-designed saving mechanism which will save the world when you get close to the save points. But, if you proceed and come back to a previous save point, it will save your game regardless. You can take advantage of this feature or you can not, it is up to you.

Just let me kill you for a while 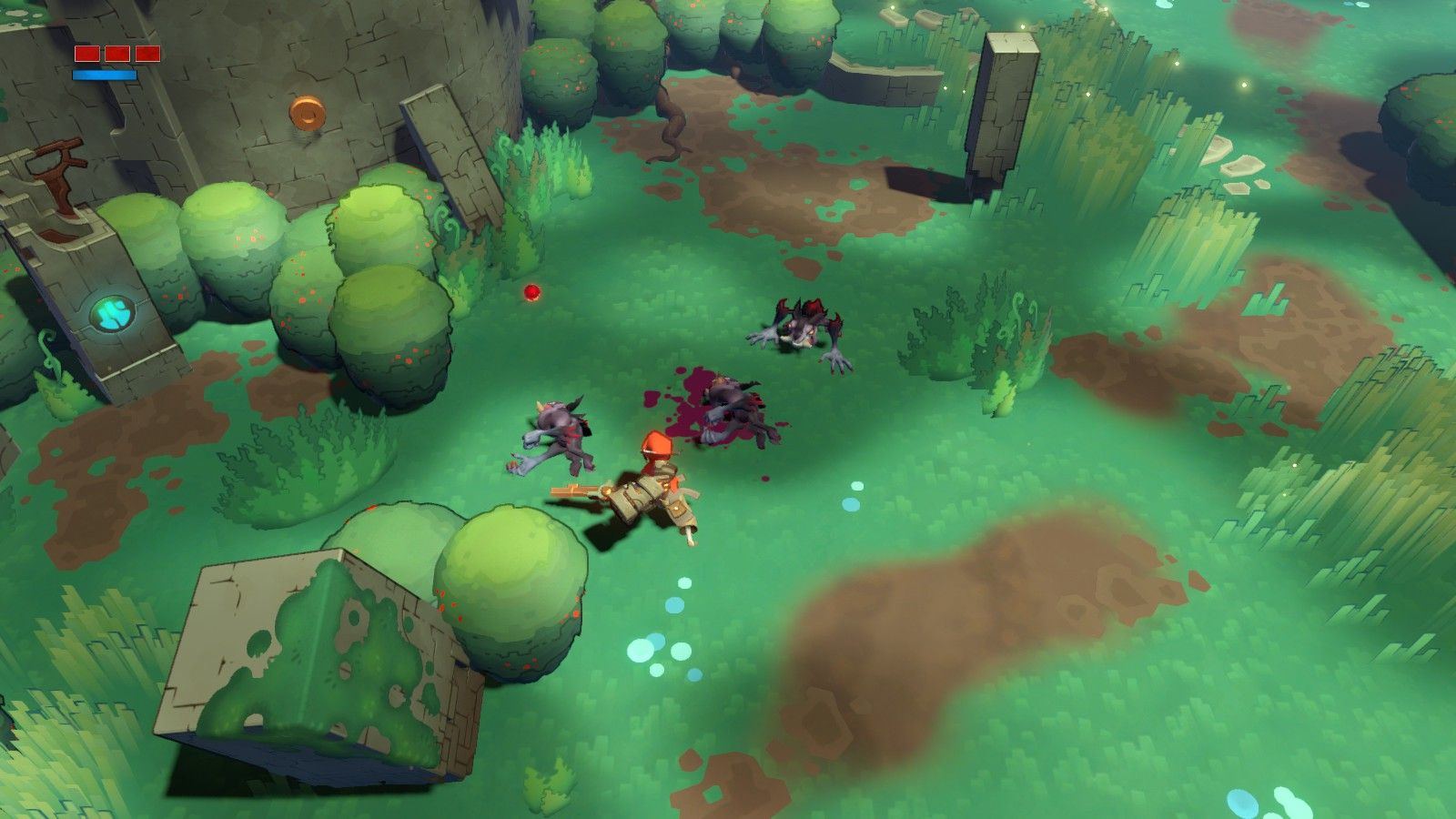 When it comes to action part, I believe it is in moderation. Your fist is enough to torn everything into pieces, you even have a sword for that. But killing is oddly satisfying. Body parts everywhere, just how we like it.

The saving mechanism, combined with the creatures of the world, may cause you some trouble. After you respawn, you will find the world as you left it yet the creatures will be at their places, waiting for you. After killing your enemies, you must proceed and find a new save point, so you won’t have to deal with them again and again.

The abilities and augments you gain will provide you a more lively gameplay and combat. Amongst them, I enjoyed the warp ability at its full. This ability lets you move like electricity at some certain points, you may see it as teleportation. 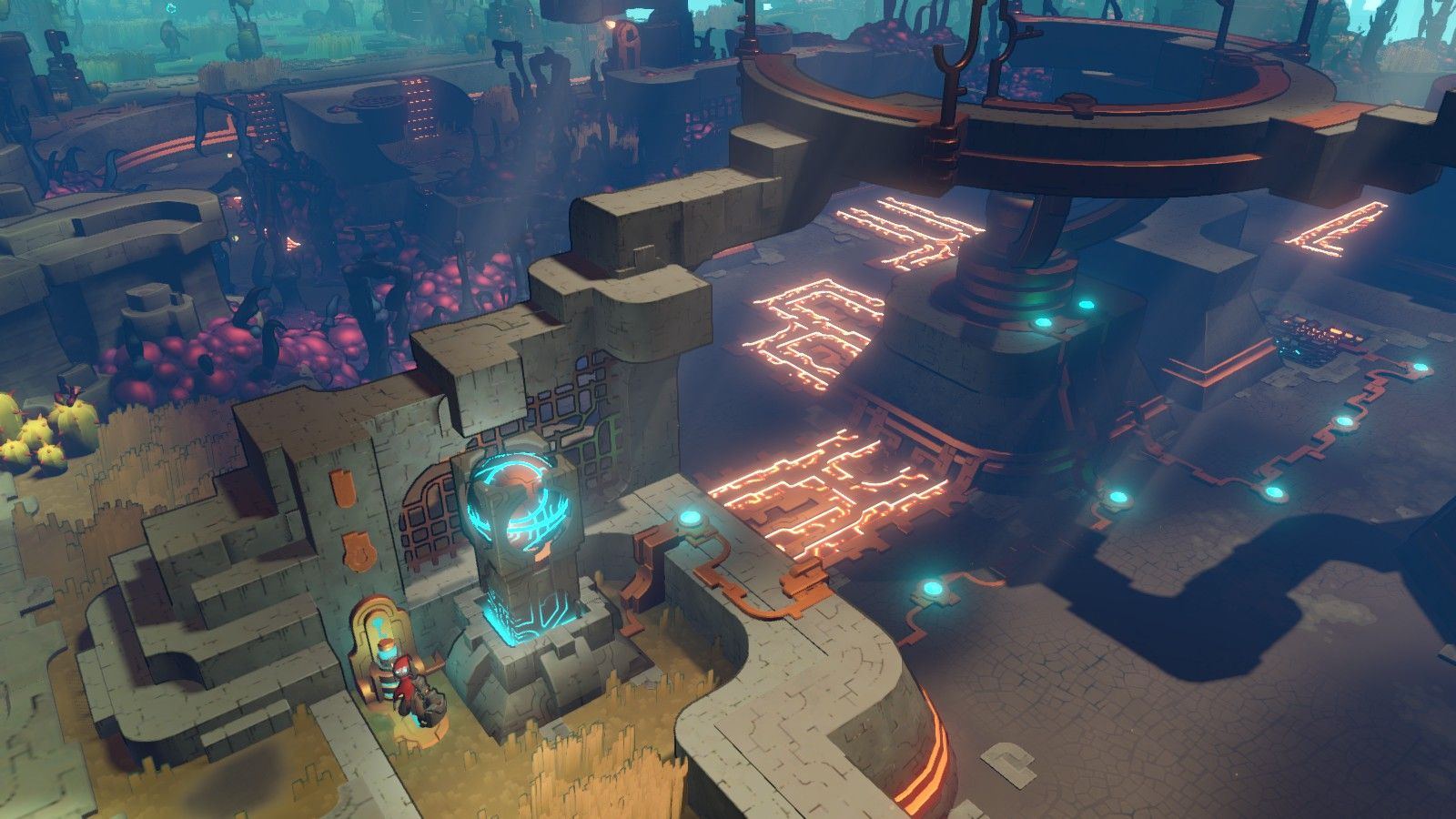 It is clear now that the highest point of HOB is the environment and the world of it. The world is everything and I am afraid that the more I talk about it, it’s more possible that I let something slip about the story.

When it comes to audio, you don’t hear much. Our protagonist does not talk yet he/she grunts from time to time. Environmental sound is, again, spotless. The soundtrack of the game comes from Matt Uelmen who is familiar with his works on soundtrack of Diablo and Torchlight. You, sir, are talented. (Talented? TALENTED? He is a f—ing legend! -E)

HOB is a game which I was missing for a long time and I didn’t even notice it until I laid my eyes on it. The game is a flawless mechanism with so much to unravel and show you. It feels like HOB’s world is a machine with unstoppable gears, still turning even when I am not playing it. It is like a working watch and once you pull out the crystal of it, you can’t help but admire. Creating such art and experience deserves an applause.

I encountered some glitches while playing the game. The floor went missing for a while, for example, yet I experienced no game breaking bugs. I recommend HOB even for the gamers who does not like platform games. It can be your chance to start enjoying them.

The game is now available on Steam. What’s not to delve into the ever-changing world of HOB?

HOB was reviewed using the Steam key provided by the publisher.

HOB is a game which I was missing for a long time and I didn't even notice it until I laid my eyes on it. The game has a flawless gameplay with so much to unravel and show you. What's not to delve into the ever-changing world of HOB?