City of Brass is a first-person action adventure title developed and published by senior BioShock developers’ new studio, Uppercut Games Pty Ltd. The game is now available for PC, thus, I am lucky enough to lay my hands and eyes on this title, and share my first impressions with you.

City of Brass’ most outstanding feature is its atmosphere since the game takes us to wonderful places inspired by Arabian Nights. You can enjoy warm sand underneath your feet, the shiny and overly detailed architecture everywhere you look while the sun is roasting your head.

While playing the game, we control a protagonist who is armed with a Maliwan SMG. She is a Vault Hunter. Sorry, can’t hold it. Our protagonist is armed with one of the most badass melee weapons of all times: a scimitar. But wait, there is more! He is also armed with a whip which combines perfectly with the scimitar and these together, makes the gameplay a unique experience. 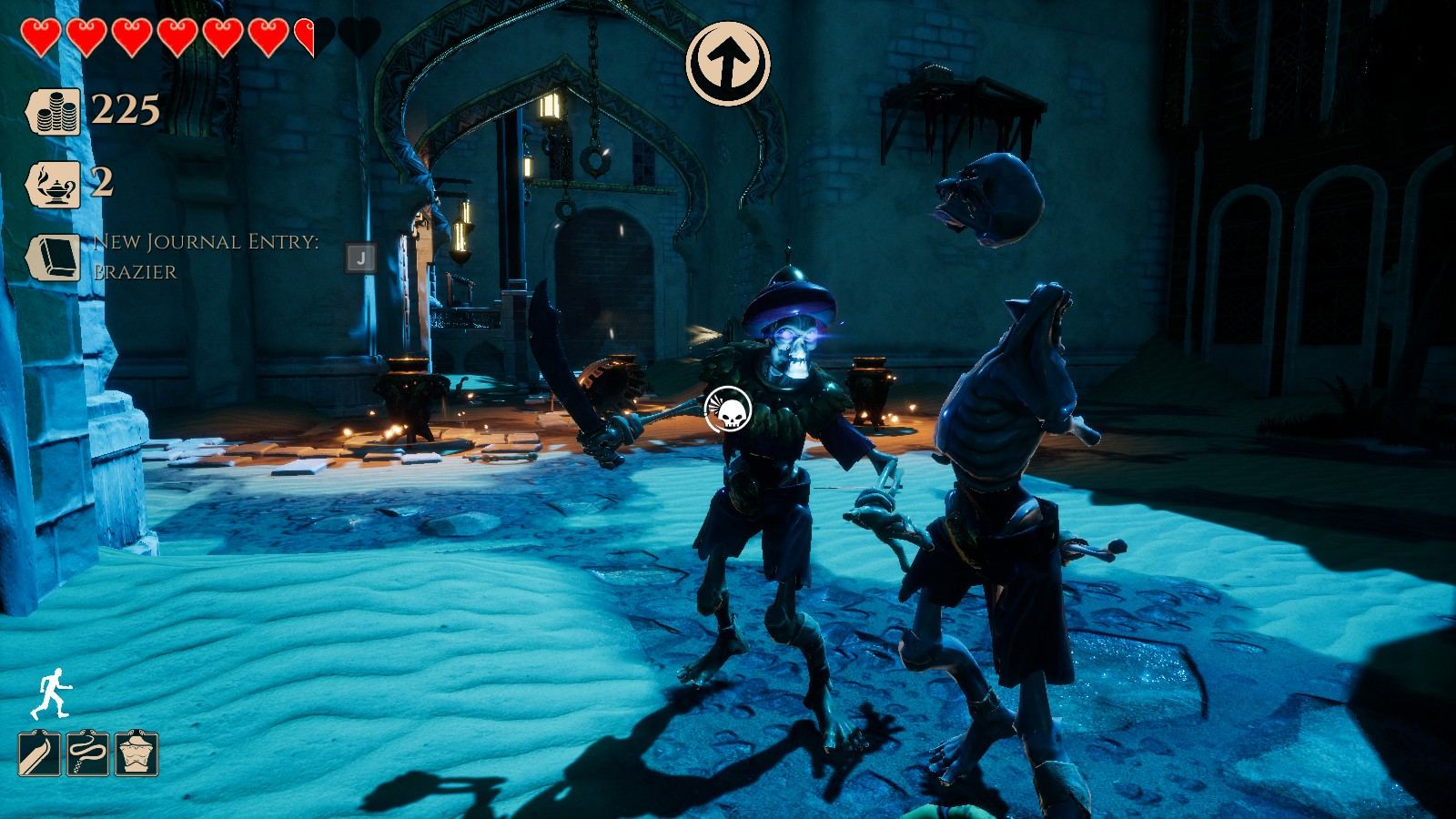 The story of the game revolves around the old and cursed city, City of Brass. Once, it was a glorious and wealthy realm filled with treasures collected from all around the world. It was so wealthy and all the people who were living in this city were so rich, there was no one to serve them. So, instead of building servant robots because this is not a sci-fi game, they bound genies as servants.

One thing lead to another and because of the thirst of the immortality, people of this city imprisoned three genies at the center of the city. But, you can not eat gold and all the merchants and allies fled from the city. People started to starve and went delirious. As they were dying one by one, they filled the city with traps to protects their gold and jewels. And now, we step into this city where the undead roam, with the intention of breaking the curse or being a part of it.

Before we start, the game welcomes you with Blessings and Burdens screen which is one of the most successful ways to adjust the difficulty of a game I’ve seen for a while. See below: 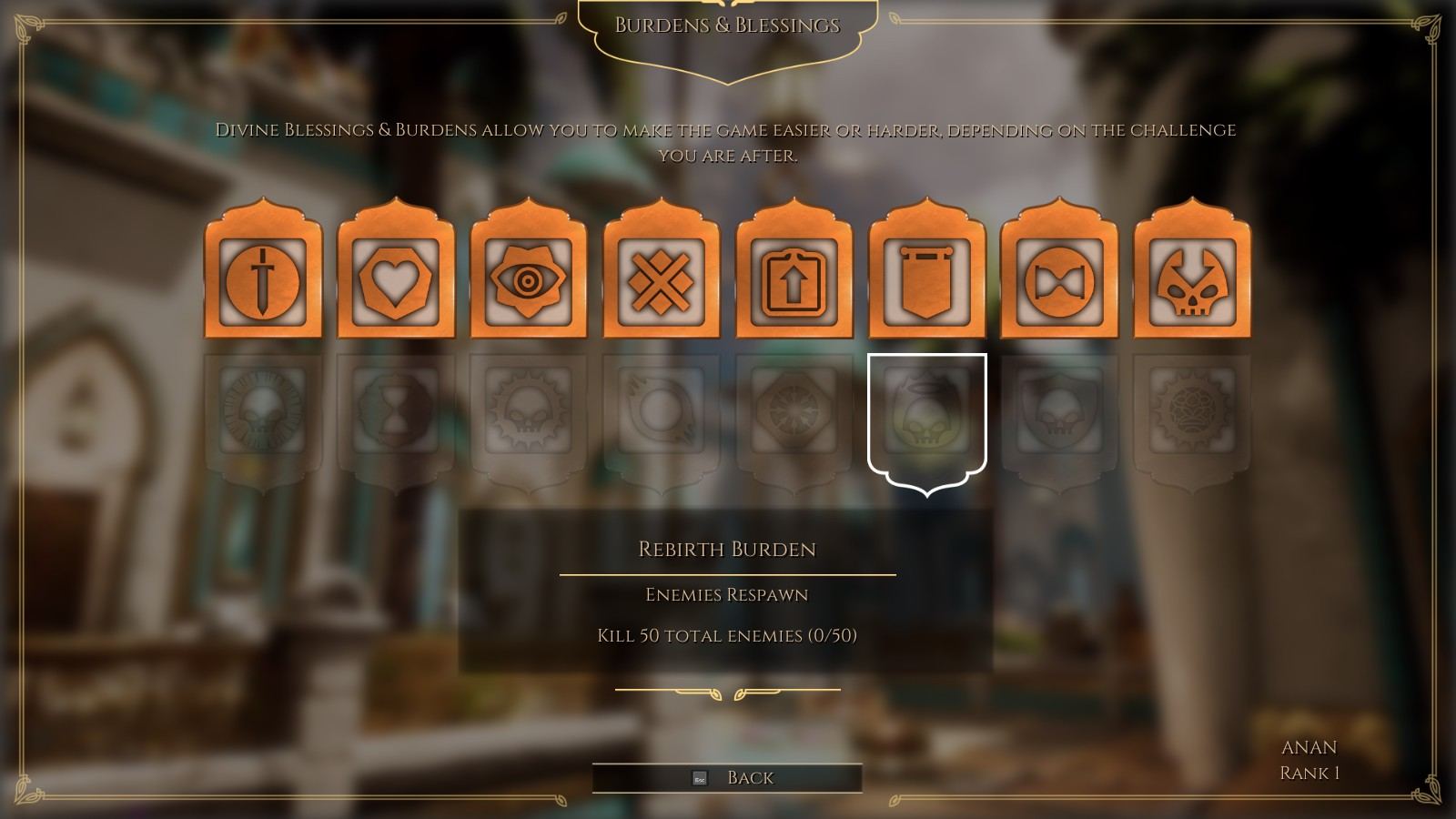 The game is designed as levels and each level requires you to reach to the exit. Each map is filled with Arabic themed traps like sand-spurting mechanisms on the walls, spears darting from the floor, hidden holes and many more. They are right there, where you need to stand or pass. These traps reminded me of Skyrim’s and they are everywhere.

Along with that, the streets are filled with undead soldiers who have various roles such as swordsmen and archers. But also, these streets are filled with treasures which you can collect. By collecting them, you can upgrade your gear and buy what you need from the genies around the map. Hopelessly, I was looking something which will remind me of BioShock somehow and there I found it. The genies are like vending machines in BioShock, laughing and making weird noises. You start the game with three wishes and when they run out, you need to purchase what you need. 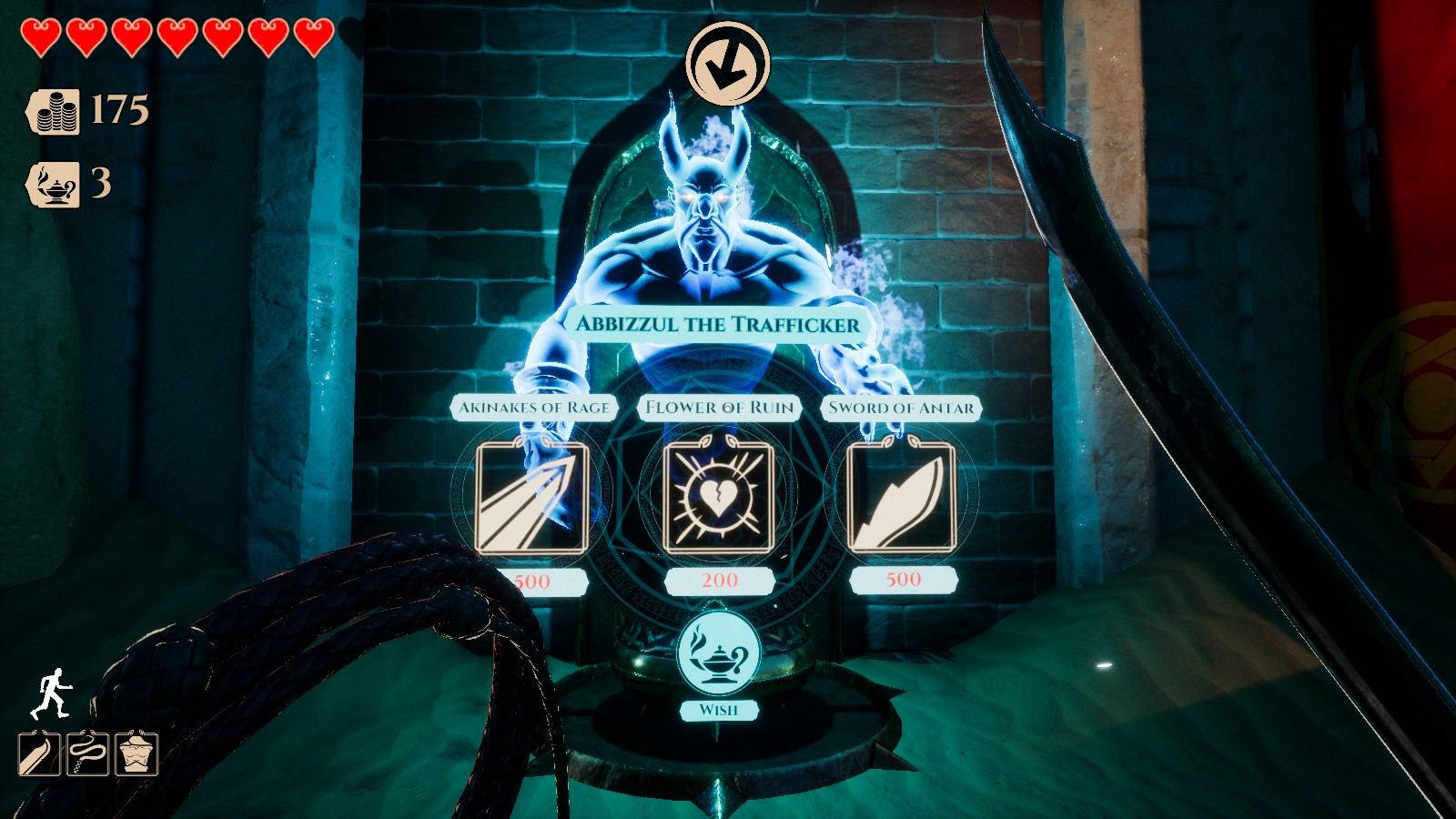 When it comes to the combat mechanism of the City of Brass, I can say that it is fast but dull. It is highly enjoyable to use a scimitar and a whip, but enemies are not that satisfying when it comes to AI. They notice you a little bit too late and the way they vanish into thin air could be much more satisfying, but overall I enjoyed the combat, specially after I upgraded my whip into a much more shiny one with the power of setting enemy on fire when unleashed.

The whip serves many purposes like stunning the enemy, pulling the enemy near you, collecting the treasure even from the places you can not reach and breaking stuff. Pull them near and let them taste your scimitar, whip and burn them, throw gas lamps and burn them, or the best, throw a ghost chicken to distract them. Actually, this bird was one of the best things I’ve ever experienced in a game and it is a brilliant addition to City of Brass. 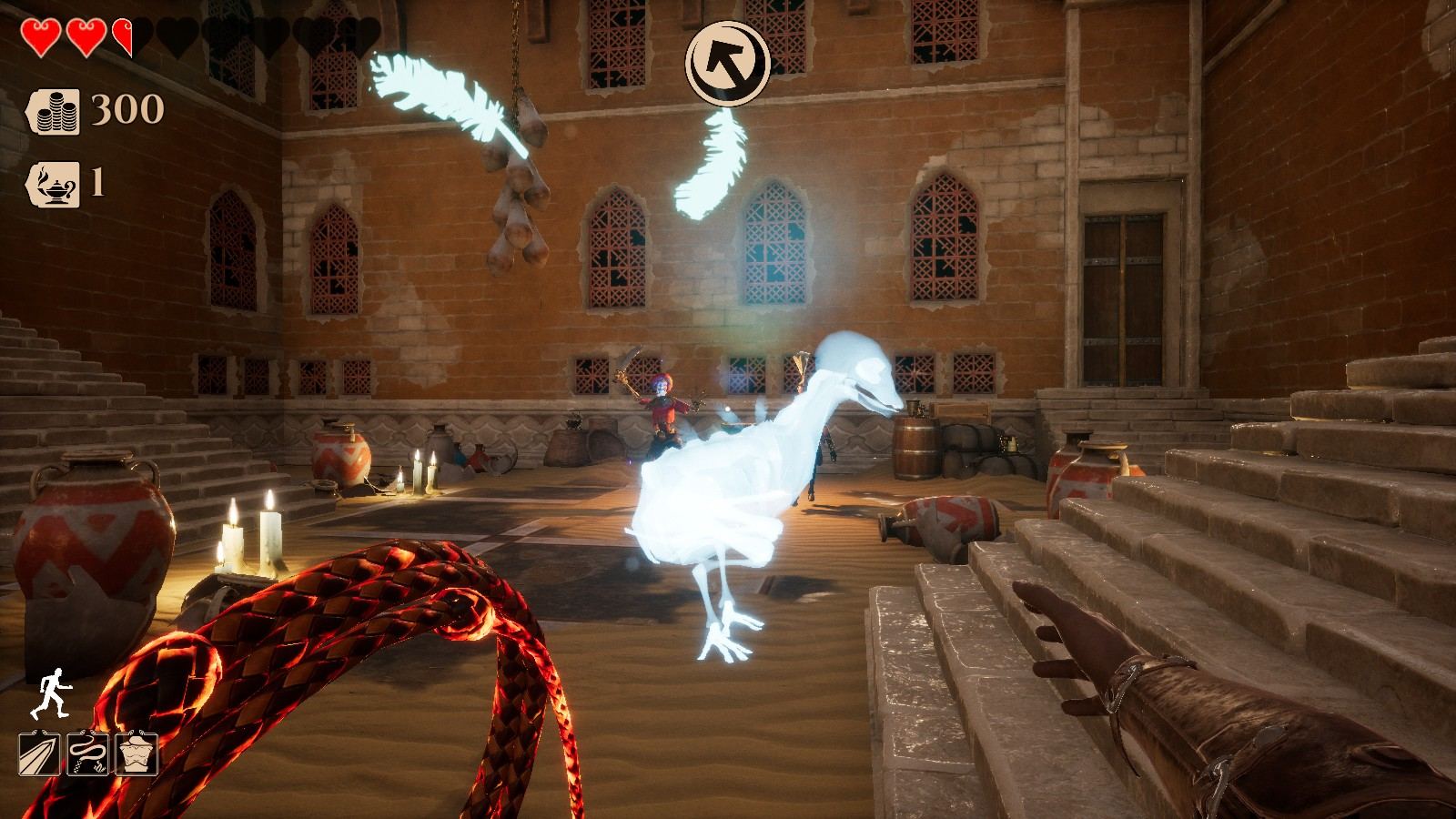 There is also another feature that makes the game so fluid and rhythmic: The ever-changing procedurally generated world of City of Brass. When you die, you die. You start over from the very beginning and delve deep into a new world. This makes the game kind of addictive with no real progression. You need to go back and try something different this time, with different purchases from the genies and different approaches.

I must mention that along with poor AI, the game sometimes tends to act weird. There are breakable objects around the map like barrels and urns, and they sometimes fly in slow motion when you break them. This way, you get to see the beauty of the stars and the tall towers of the city, but it is kind of annoying. Yet, it is something which can be fixed.

When it comes to the visuals of the City of Brass, I can easily say that it is the most charming. The architectural design is stainless and each level design is a blessing. An Arabian Nights themed game feels like it must have exaggerated visuals and the game provides that. It is gold and rubies everywhere, guys. Of course, it should be shiny and exaggerated. 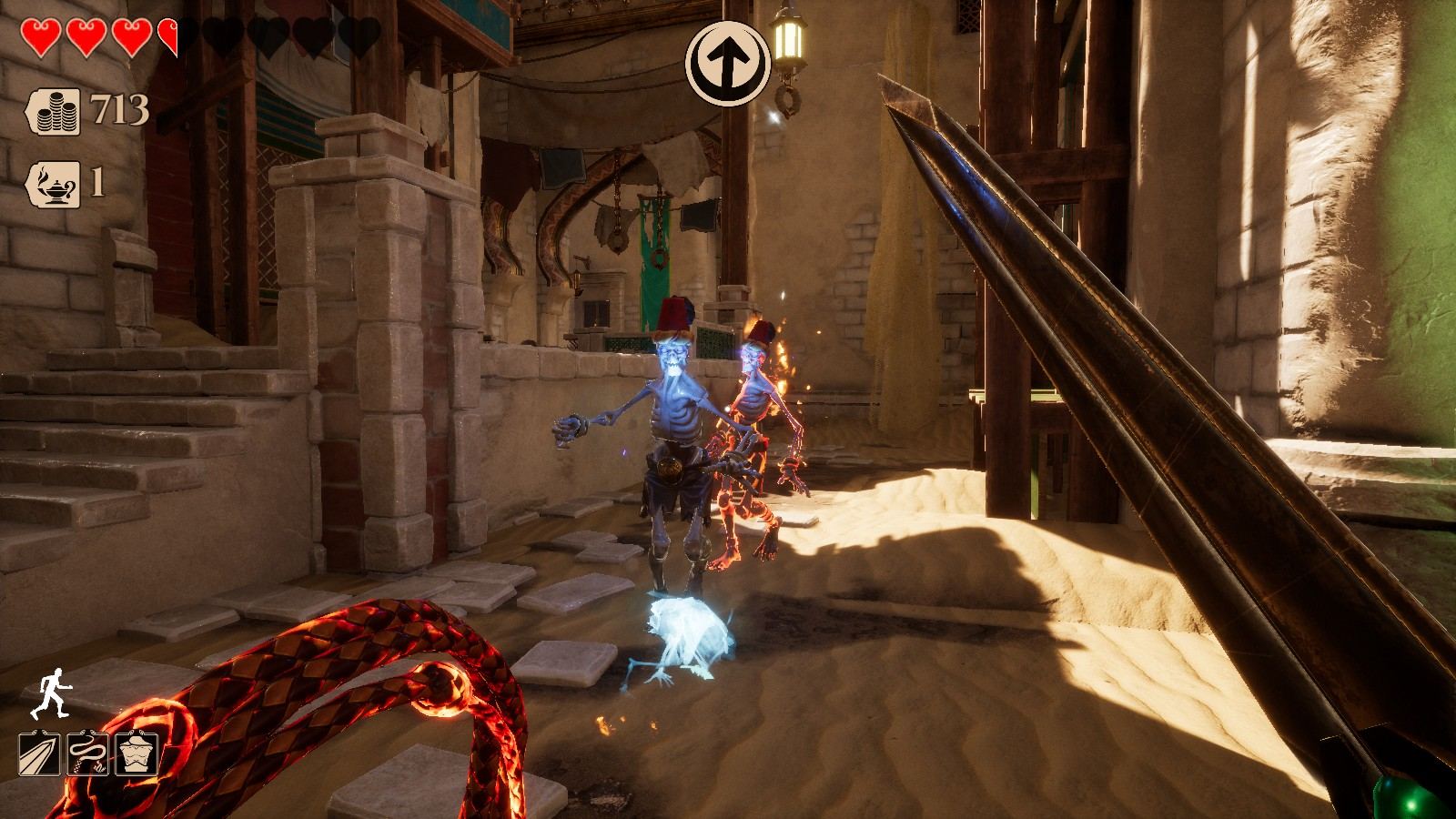 The atmosphere is unique and the environment is highly interactive. The game is only missing a flying carpet, or I am about to find it very soon. Soundtracks, on the other hand, are always boosting the gameplay.

Overall, I guess I am already fooled by the cursed City of Brass and its blinding treasures. The game always provides you with a reason to come back and try again. Maybe it is the successful combination of the melee weapons or genies that act like vending machines or the beautifully crafted visuals of the game. The game is truly cursed in a charming way and offers a highly enjoyable gameplay for the ones who enjoy roguelike games.

City of Brass is now available on Steam and if you want to delve deep into the heart of it, visit here.

City of Brass was reviewed using a Steam key provided by the publisher.

The game is truly cursed in a charming way and offers a highly enjoyable gameplay for the ones who enjoy roguelike games.