Space Pirates and Zombies 2 was available on Steam as an early-access title since 17 May, 2016. Today, it left early-access and we are here to share our first impressions with you.

You are not special, my friend

Like its predecessor, Space Pirates and Zombies 2 is set in a post-apocalyptic galaxy where the zombie thread is defeated and infrastructure has collapsed. But even after that, it is hard to survive in this galaxy. In order to survive we must scavenge, fight, explore and get stronger.

Before anything else, you must know that everyone else is trying to survive in this galaxy like you do. There are two hundred captains who are all capable of the things you are capable of. Everyone needs to scavenge, everyone needs power and everyone needs resources in order to survive. Space Pirates and Zombies 2 is also a power-play since you are a member of the lone captain group at first and try to make some more noise during your gameplay. In order to gain more power and get your survival chances up, you start to interact with the world and other fleets around you.

The most noteworthy part of Space Pirates and Zombies 2 is that the feeling it gives you. You are not in the center of this game and of this galaxy. You are just a captain with a lame-ass ship like any other and there are powerful factions out there which can slaughter you in the blink of an eye. There are sections which are owned by other captains and their fleets, and you are just a lone captain who scavenges what other people left behind, trying to fight people and make friends. So, you need to pull yourself together and survive this galaxy, if you can. 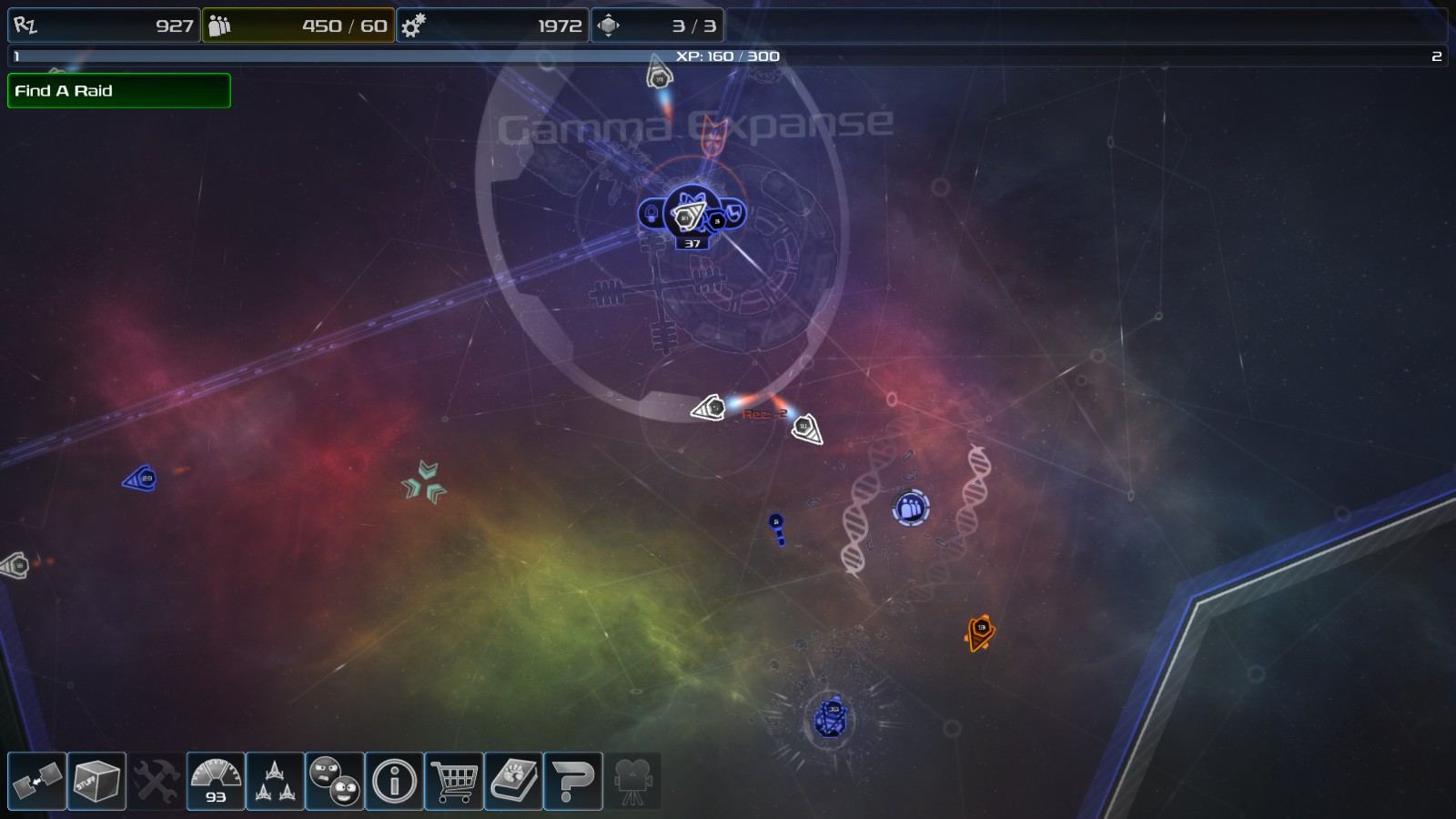 Except the times you are in combat, joining a raid party or mining, you will be playing the game only on your Galaxy map. The galaxy map of SPAZ 2 is sectioned and you will easily explore other sections by moving your ship on them. Most of the sections include a wreckage to scavenge, crew members and Rez sources to collect and a base where you can trade, participate in an arena, visit its junkyard and such.

Some of the sections of the galaxy map are colored which means they belong to a certain faction. After level 5, you will be able to join a faction and become a part of them rather than being a lone captain. While exploring the map, you will notice some warnings on the screen like ‘A is now at war with B’ and such. These warnings will help you decide which region you will choose. You will constantly witness factions form and break alliances during your gameplay. And, once you have your faction, you will form and break them. The ever-changing world or galaxy of SPAZ 2 is more impressive and compelling than I had expected. Even watching the map and following tiny ships is a great time-killer.

If you progress some more and have enough resources, you will be able to build your own starbase and protect it from others. And if you progress a little bit more, finally you will create your own faction and recruit your own crew members and together, you will fight against others. After that part, a surprise which shall not be named is waiting for you.

While moving around the map, you will spend Rez which is a highly valuable resource. During trades, Rez will give you the upper hand since it is highly valuable and hard to find. Goons (humans), Rez and scraps are tradeable and you can purchase better parts for your ship. After that, you need to visit a junkyard and form your ship again with better parts. This part of the game, I believe, is the most enjoyable part. Ripping your ship apart and bringing them together to build a better ship is extremely enjoyable and highly satisfying. 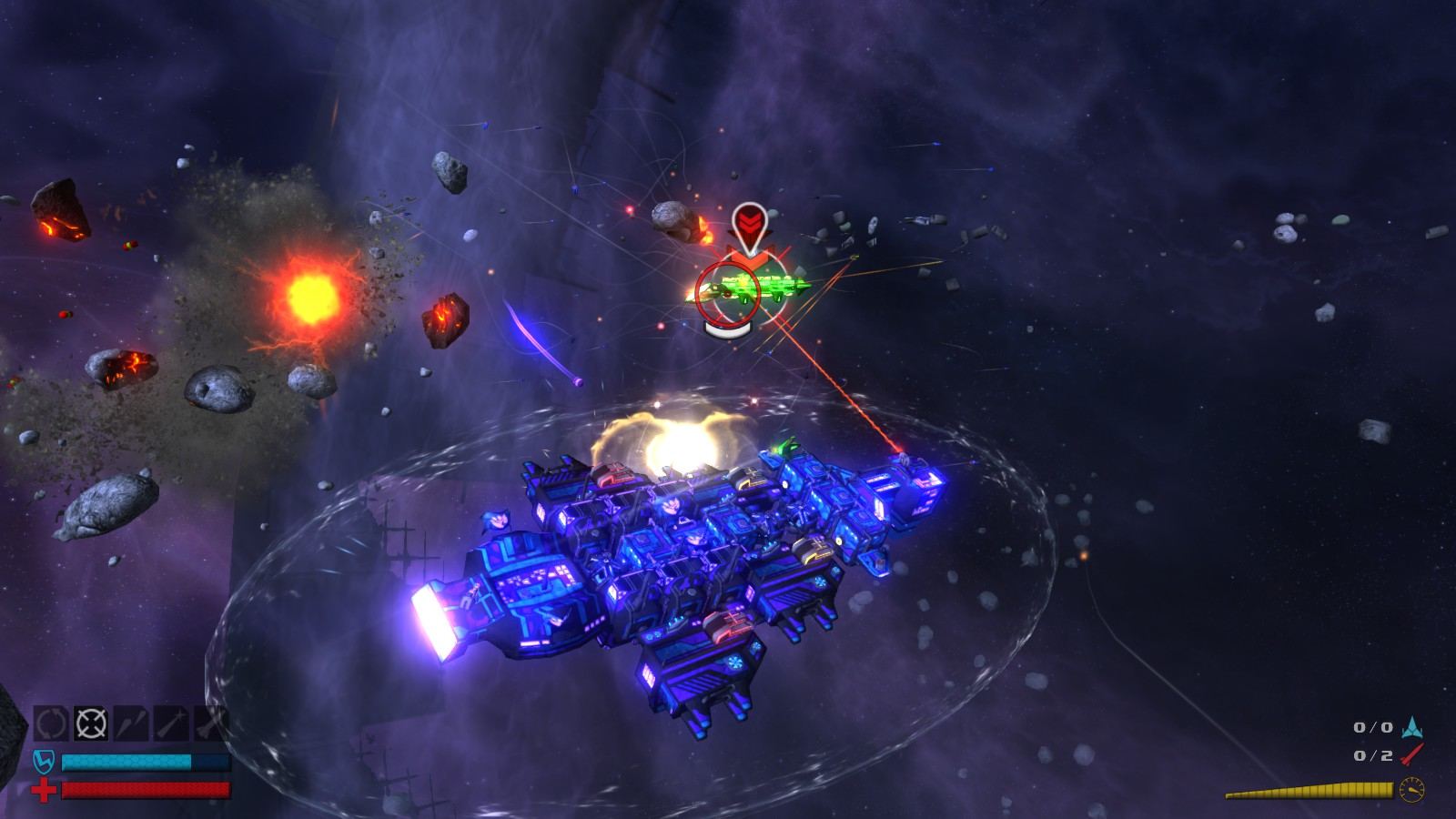 While scavenging wrecks or Rez mines, you may be interrupted by other ships. Moreover, they may even want your resources and threaten you. You can fight them or do as what they say, but I recommend you to follow the storyline of the game and get a little bit stronger before you start a fight. The game will tell you how to join a raid party or how to mine some resources and fight with ships which protect them. After a certain level, you will be able to pick a fight as your heart desires. You can also befriend other fleets and this action will make it easier for you to join a faction. Again, pay attention to colors while you are making friends.

Combat in Space Pirates and Zombies 2 is extremely fun. You build your ships with weapons and shields and there are little helpers which will be on your side during the fight. The auto-lock option makes everything easier. But, this is not Space Pirates and Zombies. You can not murder people or steal their stuff and run away. If you want to escape the fight after you’ve started, you need to leave the things you collected behind. The best thing about fights is that you can take a look at your enemy’s ship, choose the part you like the most, tear your enemy’s ship down and grab that part with your tractor beam. And, it is yours! How savage is that!? Every modular part is randomly generated. This feature gives you a chance to build the mothership of your dreams and there will be none like yours.

You will also level-up and unlock perks while you are completing quests, following the story, exploring new areas, trading, mining and arena fighting. Pretty much everything you do during your gameplay will help you level-up. These perks will give you advantages during combat, trade and even exploration. There are no skill trees like in the first game, there are random skills per level which you can choose.

Even in a fight, you get the feeling that you should not take the game too seriously. The game gives you that and is designed that way. It is a way to relax and have fun without pushing you too hard and without too many serious decisions. Space Pirates and Zombies 2 is not a hard game and maybe it will not satisfy the ones who were waiting for a complete sequel to Space Pirates and Zombies; yet it is fluid, entertaining and perfectly smooth when it comes to gameplay.

The story behind Space Pirates and Zombies 2 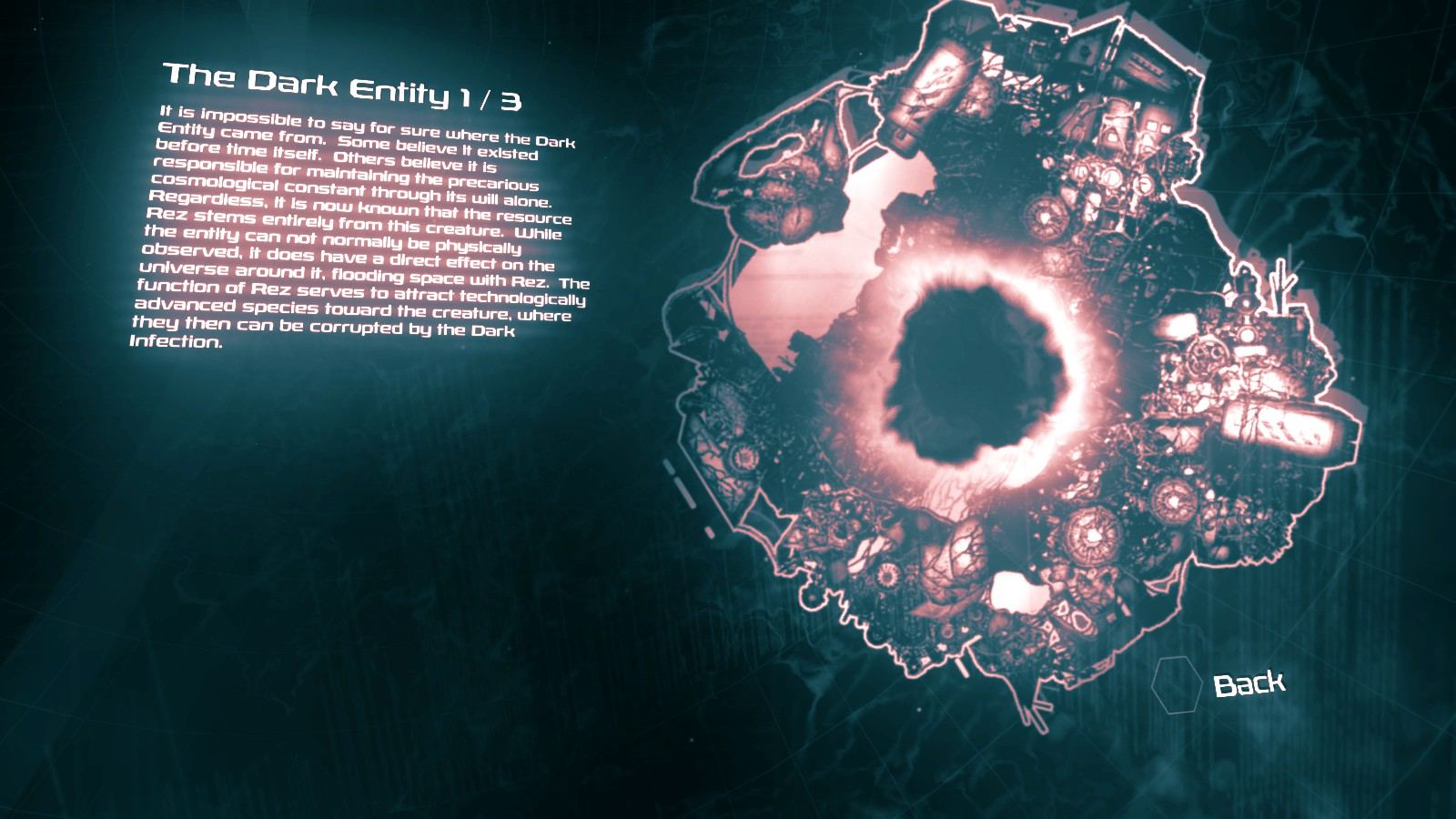 The story of Space Pirates and Zombies 2 will reveal itself by the lore books you will find during the exploration of the map. Of course, the dialogue of the game will give you hints and tell you the situation you are in right now, but if you want to know about the past, you should read or listen to those lore books.

The highly important and crucial element named Rez is somehow shapes the story of the game. It is a material which can be mined from asteroids and can be used to build ships and buy technology. After finding the Rez, humans has expanded throughout the galaxy. Thanks to Rez, people learnt about cloning, faster-than-light travel and such. This way, humanity had spread to other planets and their diseases along with them. Many human governments collapsed and now the glorious days are gone. The thing which can lead humanity into salvation is now the reason of destruction. Humans are now only the shadows of their former selves and trapped in endless wars.

Some say that there is an endless and hidden motherlode of Rez in the galactic core and we are to trace and find it. Our main mission during the game is to find this huge source of Rez. Each lore book will give you detailed ideas about the past of the Galaxy, Rez and human forces of the game.

When it comes to visuals, I can not say that this is the most fantastic space game I’ve ever seen. That’s because I’ve seen too much, maybe more than I should, yet SPAZ 2 has charming visuals, specially when things blow up. Everything you see is destructible and a good way for target practicing.

I can easily say that the game looks and sounds good enough. It is clear that developers put a lot of effort in them, since they are perfectly fit to the situation and the gameplay. You can play hours and hours of this game and never get bored. Environmental design is simplistic, yet colorful. The most charming thing on your screen is always your ship.

The controls are smooth and very responsive, even when in a fight. I encountered with no bugs, no crashes or no technical issues during my gameplay.

If you haven’t played Space Pirates and Zombies before and long for a game of this genre, I highly recommend you to play it. If you’ve played Space Pirates and Zombies, again, I highly recommend you to continue your journey with Space Pirates and Zombies 2 if you are not waiting for a perfect sequel. SPAZ 2 is a highly improved version of SPAZ, yet you may not find everything you wanted in this game. There is no multiplayer option, there is no skill tree, no superficial combat. Instead of these, you can enjoy a more complex combat, a bigger mothership, bigger explosions, more quests and of course, more space. Oh, there is also a VR option.

Space Pirates and Zombies 2 is now available on Steam and you can purchase it by visiting here.

Space Pirates and Zombies 2 was reviewed using the Steam key provided by the publisher.

There is no multiplayer option, there is no skill tree, no superficial combat. Instead of these, you can enjoy a more complex combat, a bigger mothership, bigger explosions, more quests and of course, more space. Oh, there is also a VR option.

Activision has stated that a unit of 500GB PS4 model may not be able to ...
By Haktan Yılmaz
8 hours ago

CD Projekt has announced that the major 1.2 patch for Cyberpunk 2077 got delayed. The ...
By Haktan Yılmaz
11 hours ago

The Pokémon Company is expected to celebrate the 25th anniversary of the series on February ...
By Tuba Çetin
15 hours ago

Harry Potter RPG, Hogwarts Legacy, has been postponed to 2022 to give the game the ...
By Tuba Çetin
16 hours ago

If you don’t know, Henry Cavill is the person who played the Geralt in Netflix’s ...
By Yusuf Tarık Kayhan
16 hours ago

EA and BioWare decided to stop the development of the 2019 action-RPG Anthem. BioWare announced ...
By Yusuf Tarık Kayhan
16 hours ago

PlayStation has announced their next-gen PlayStation VR headset, we don’t know the name of it ...
By Haktan Yılmaz
1 day ago

Looks like we’re not done with the PS exclusive games for PC yet. And now ...
By Haktan Yılmaz
2 days ago

PlayStation published a new blog on PlayStation.Blog announcing that we will get a State of ...
By Yusuf Tarık Kayhan
2 days ago
0 %