Since we spoil everything with glitters, not even worthy love stories and barely handsome teenagers and since Vampire Mythlogy couldn’t escape the curse of our generation, I must warn you that Vampyr is nothing like it. Vampyr is a dark and saddening action role-playing game from Dontnod Entertainment and it is coming strong.

Protagonist E. Reid is a vampire doctor who is of course, capable of fighting. The game is constantly reminding you that you need blood but you can also finish the game without killing. If you keep feeding on people, you will be stronger and level up. But what about fighting skills and combat system, you say? Here we go.

You can wield melee weapons such as saw and ranged weapons as well. You will be able to craft and improve your weapons with the items you will be looting from your victims. Vampiric powers are usable while in combat but they will cost your health and energy and if you want to gain your energy back, you need to feed. The best part is which you can boil the blood of your enemies and cast blood spears. 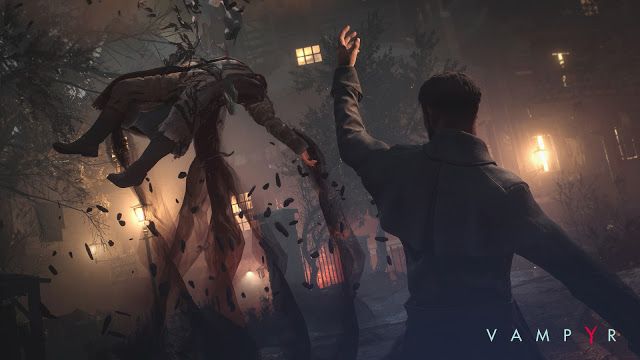 “Armed with an array of conventional melee and ranged weaponry, attack and dodge enemies to fill up Jonathan’s Blood Gauge, which is required to unleash powerful vampire attacks. From impaling enemies on a spike to draining them of blood at a distance, as Jonathan’s Blood Gauge fills during a combat situation, his Vampire affliction will start to overtake his more human side, unleashing destructive spells and abilities against those who try to stop him.

Combat difficulty can be affected by player actions out of combat. Feeding on civilians provides a huge XP boost, which will make combat situations easier—but that comes with caveats; an increased danger on the streets, and narrative consequences for the world’s citizens, to name a few.”