inbetweengames’ tech-noir tactics game All Walls Must Fall left Steam Early Access program today. I am lucky enough to lay my hands and eyes on this title and share my first impressions with you. If you like to take a look at the Early-Access review of the game, you can visit here before taking a look.

All Walls Must Fall is an isometric tactics game in which we control a time traveling secret agent as he travels back in time in order to achieve just one goal. You see, in the world of All Walls Must Fall, the Cold War never ended. Both sides have the technology to manipulate time and this way, they always keep an eye on each other. But, a nuclear strike is about to change the course of this war and this is why we need to send agents back in time and prevent it before everything turns into dust.

As the agent who control the protagonist, we remain fixed in time, actually in a unique position in time. In order to control our agent, we need to remain outside this timeline. The game’s main time is set in 2089, in Berlin. The time-traveler agent we control needs to go back in time to the same night every time and will have a limited time before the nuclear disaster occurs. We need to find who is behind this hellish nightmare and stop them before it is too late.

The game offers Campaign and Daily Challenges as we start. During this review, we will be talking about the campaign of the game. Also, there is a permadeath option, if you consider yourselves badass enough. All Walls Must Fall warns you that it features procedurally generated quests and in every playthrough, your experience will be different from the previous one.

Our first mission is to contact with someone who possibly has some answers to our questions. Let me remind that this is my procedurally generated first mission. This way, we make our way to our first night club which will be our common place during the game. 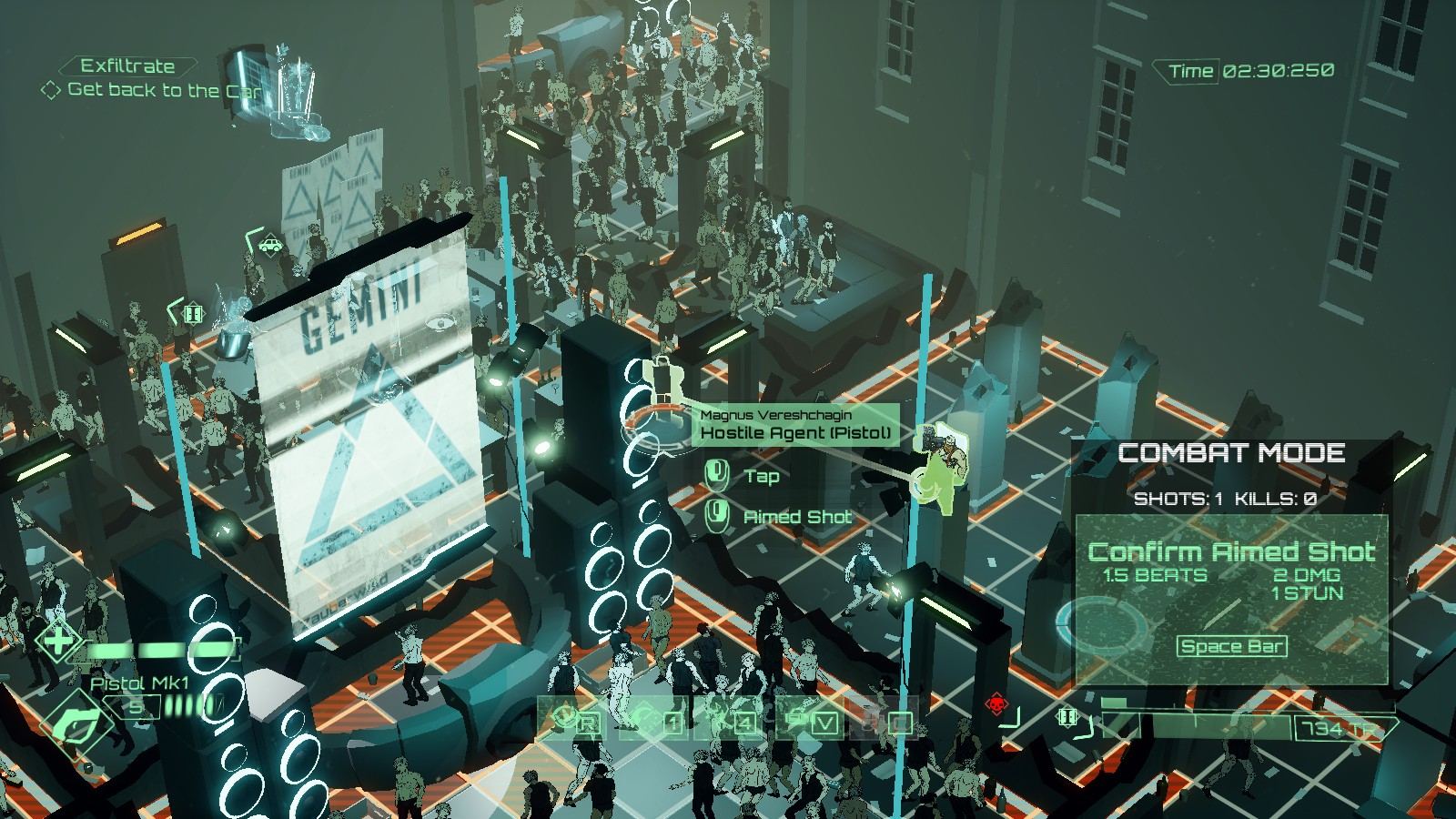 open the image in new tab to view

You see, these clubs are filled with people, dancing like crazy, but the character design is limited in number. So, why don’t we make them all clones?! Well, that must have been the thought, but I admire how they implemented that into the story. Since the clubs are filled with noise and have high energy consumption, they are perfect places to hide and to be filled with clones. By searching a link between this clone operation and the upcoming nuclear disaster, we start our gameplay.

The most enjoyable part of All Walls Must Fall is, I believe, is the dialogue feature. You need to know that every club is filled with guards, but you don’t always have to fight. By using right sentences and dialogue options, you can easily dodge a fight. Dodging a combat is easier than dodging a bullet in this game, believe me. 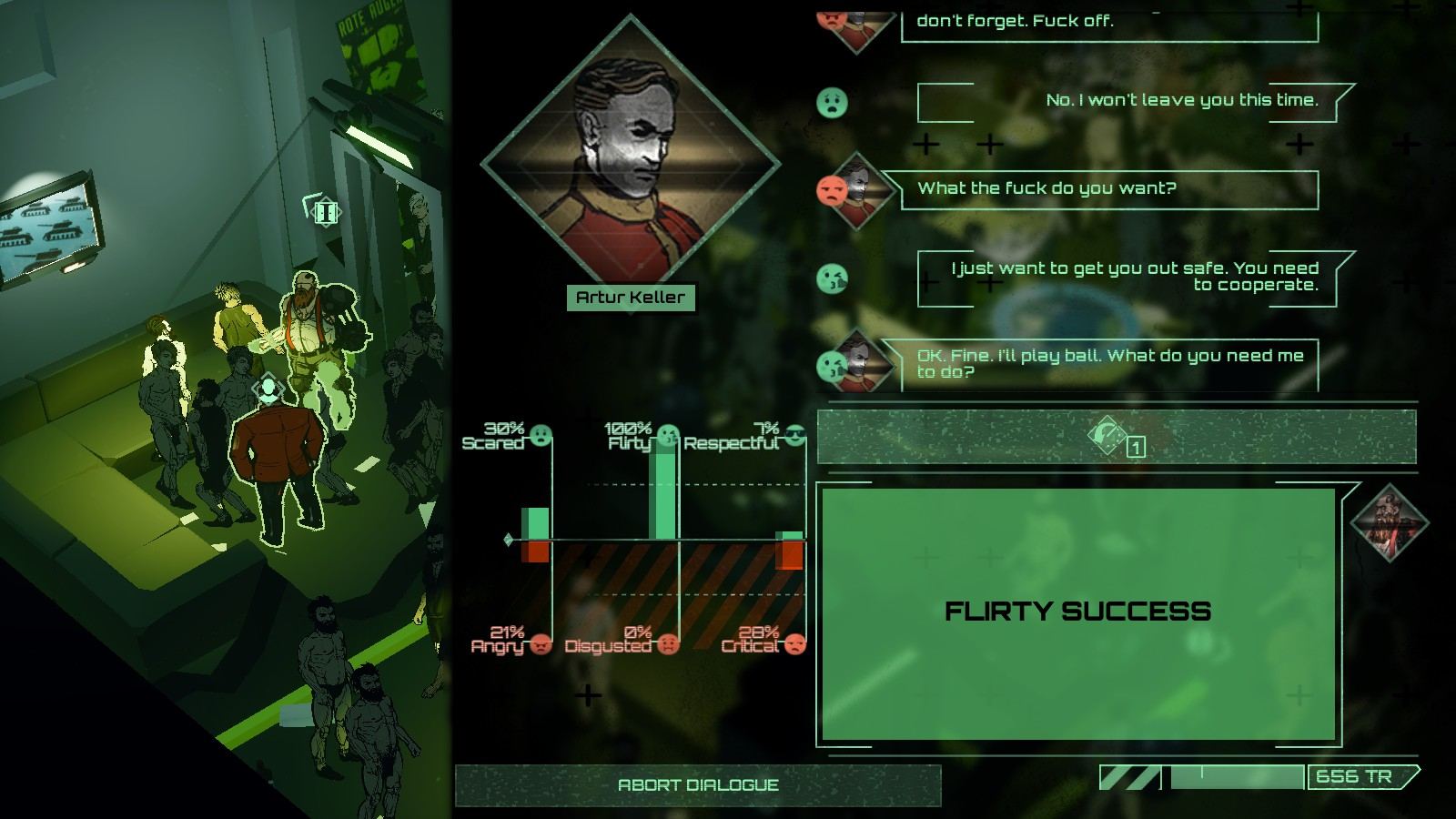 Every time you face with a hostile, a dialogue screen will appear. It is also called interrogation interface. This screen will have three variables aka ’emotions’ which can be effected by your choices. From scared to angry, from flirty to disgusted and from respectful to critical, your enemies’ reactions will change according to your preferences.

You will see that the enemies will be showing different reactions to different sentences, and you can easily watch their levels on the screen. If he tends to get scared, then intimidate him. If the bar shows that he is likely to flirt with you, then tell him what you are hiding under your prosthetic arm!

There are some cases where even if you are sure that the conversation is working for your benefit, your enemy reacts unexpected. He may get angry regardless what you say and combat may be inevitable. So, what about the combat mechanics of All Walls Must Fall, you say? Let us see. 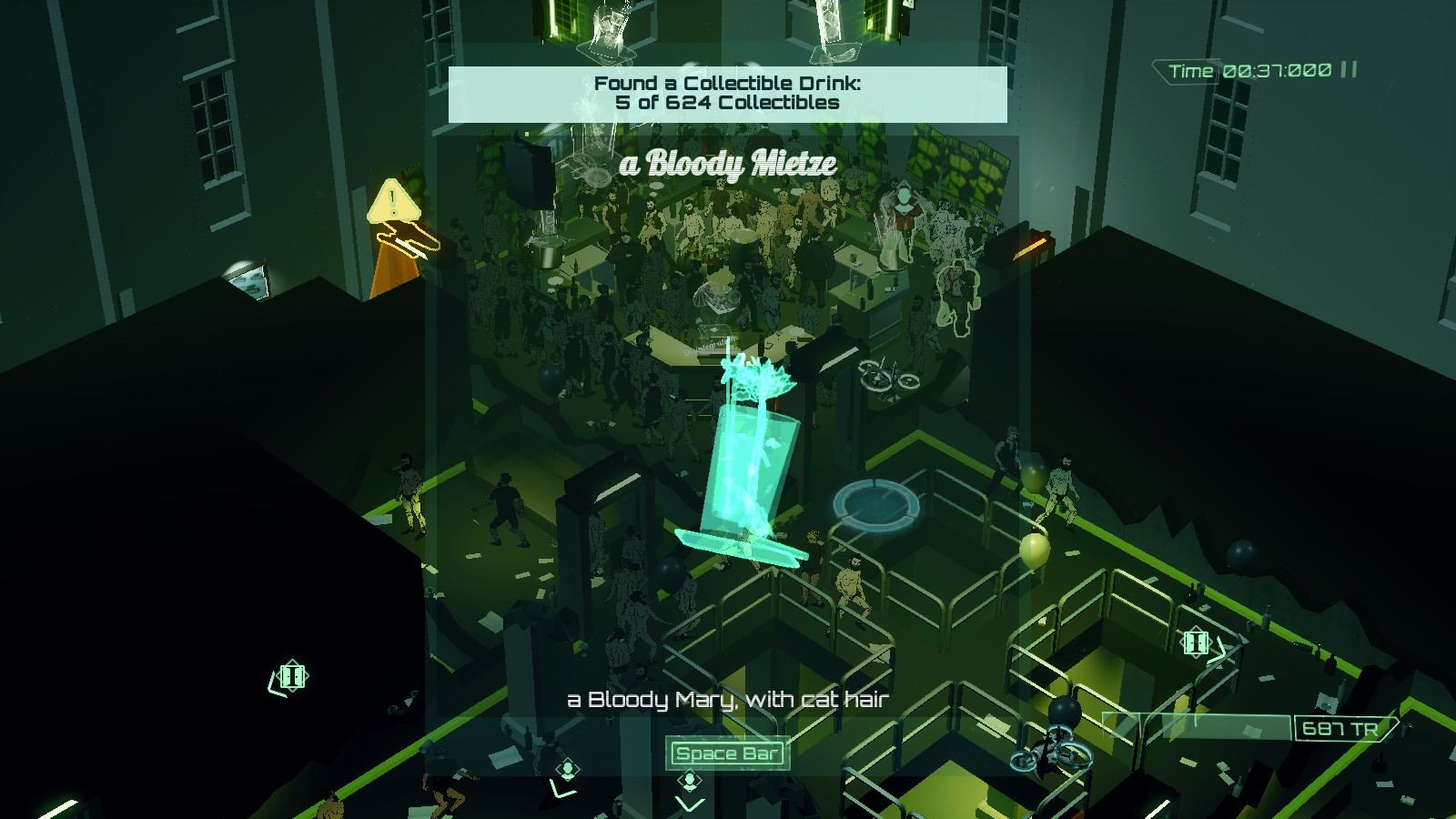 Before anything else, I recommend you to hold yourselves as long as you can before starting to fire your gun. At the beginning, you will have a pistol which can be upgraded and replaced with another weapons. When there is no way other than combat, you need to know your surroundings and how to take advantage of it, since All Walls Must Fall is a tactical combat game.

Once the combat begins, guards will be alarmed and also drones will be there to hunt you down, if you did not hack it before. If you did, they will be there to fight for you. Some of the guards also will be there to help you if you’ve flirted with them before. So, do not hesitate to flirt with them. The control mechanism of the game is simple enough, if you ask me and won’t take you a second to get use to it. You will change the camera angle and during fight, it sometimes gets painful. But, after all, this is a fight.

Tactical combat means that you need to calculate all your actions during combat and when it comes to All Walls Must Fall, you need to confirm every action before doing it. The game is both turn based and real time strategy/tactical game, and you will experience a good mixture of them during your combats, I believe.

Confirm to shoot, confirm to wait in cover, confirm to reload, confirm to take damage or of course, do not confirm and try a different approach. While you are trying to decide what to do next, time will stop and when you confirm the action, it will run again for you and every other thing on the screen. I highly enjoyed the combat mechanics of All Walls Must Fall and I died a lot even though you can undo your actions. 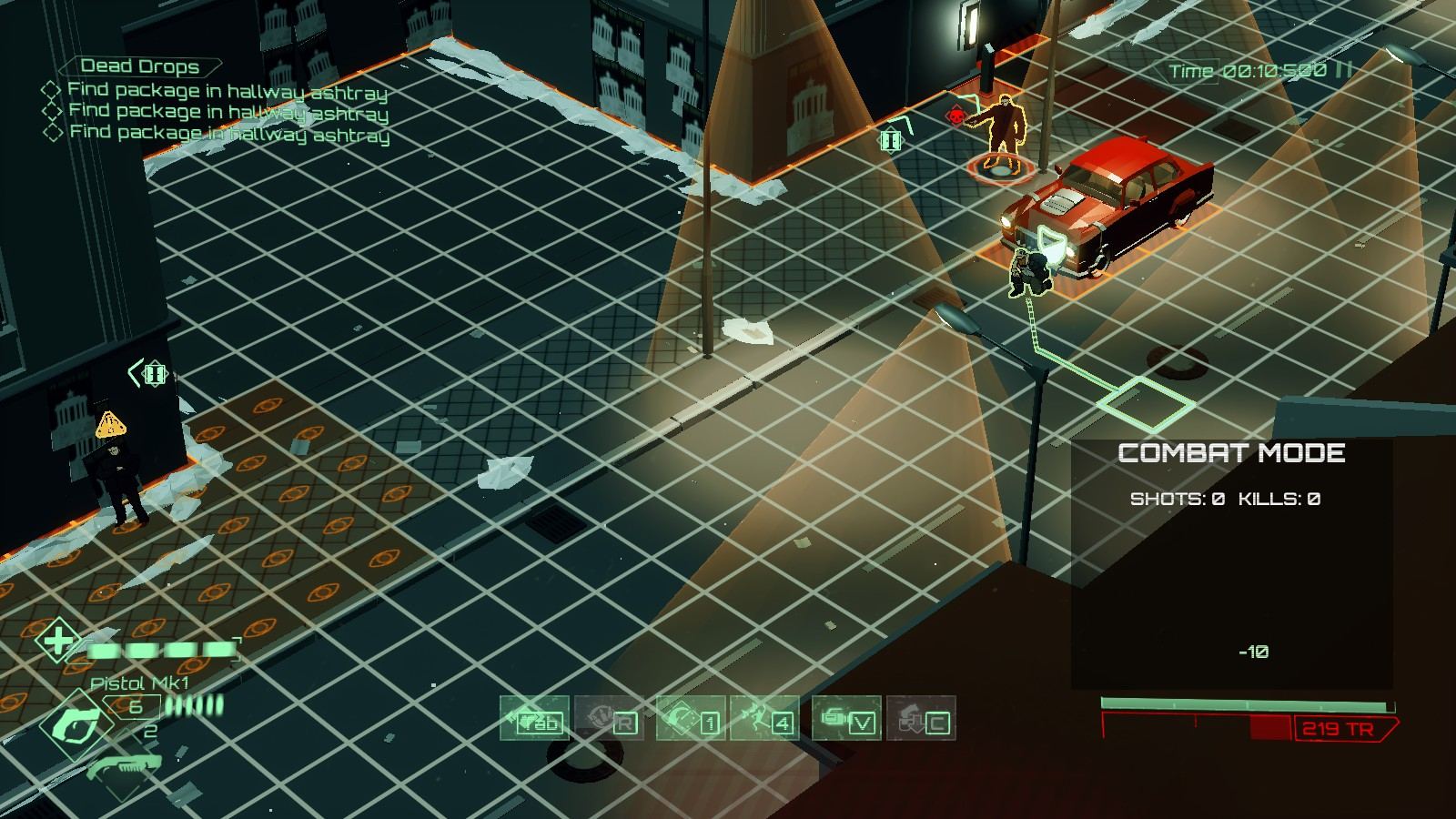 Yes, there is an ‘undo’ option, since this is a game about controlling time. Yet your undo’s are limited with your action points aka ‘credits’. Every time you discover a new area in the night club, you will get action points which will allow you to undo your actions so you can try a different approach. You can even bring back your dead ally by undoing actions. But, if you are out of points and confirm an action which leads you to your dead, you can not undo that and the level will start from the beginning. Even during a dialogue, you can spend your credits and undo your previous line in order to try out how your enemy reacts to different dialogue options.

There is a disturbing feature which is called as ‘drop the combat to the timeline’ which occurs when you win the combat. You need to drop it in order to continue and collect rewards. It is a fast rerun of your turn-based slow combat which you can watch over again yet can not enjoy. Camera angles are so weird that you can not even see what is going on on the screen. It is clear that this feature is improved since the Early-Access version of it was painful to watch, but I must say that there must be a skip button on this screen. Still, combat is fun, rewarding and challenging. Dropping could be a splendid feature, if it was working like it should.

After the combat, you will be given credits according to your success rate during combat. Leftover time resources will also converted to credits. With these credits, you will be able to upgrade your weapons, purchase new weapons like an SMG or a shotgun, armors, augmentations like Pheromones and unlock new time abilities. You can also heal your agent in this shop if he is wounded. 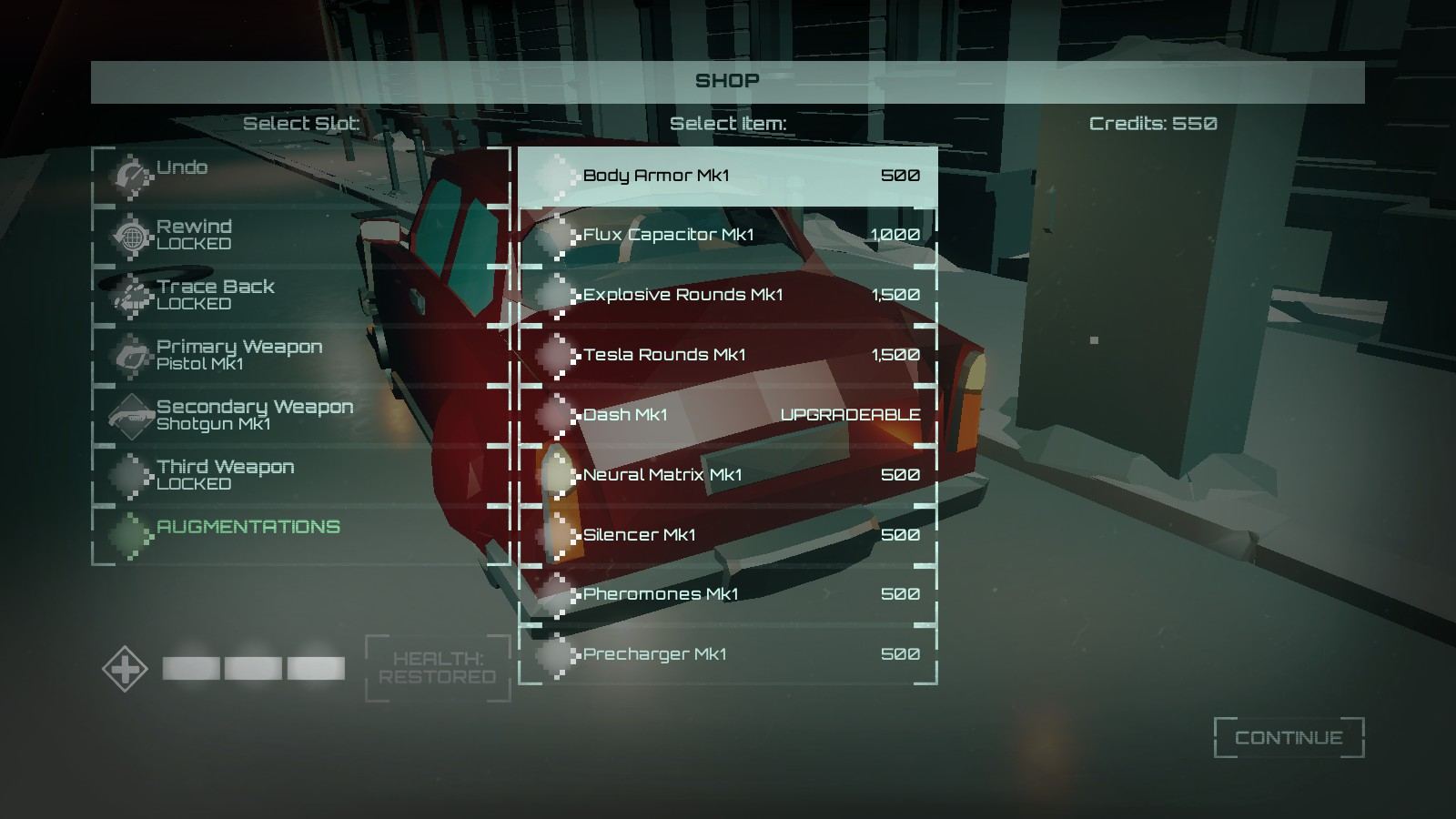 When it comes to music and environmental sounds of the game, I can say that it reflects the genre of the game very well. It is always in harmony with gameplay. Even if I do not enjoy electronic music that much, I was never disturbed by it during my gameplay. After all, I was in an out various night clubs during the gameplay and I can appreciate the sounds and soundtracks of the game.

The other thing I must mention is the visual art-style of All Walls Must Fall. Our preview says that it is rather simple and I can agree with that. I already mentioned that most of the characters of the game are the same, dancing all over the place, every time. It is always a night club filled with half naked people and it feels repetitive after a while. I can easily say that it looks good but I started to get bored of the same place again and again with a different nameplate.

Character movements still feel incomplete and weird, even the protagonist. And, I believe it is something which can be fixed in the future. Being a propaganda-powered sci-fi is enough for me to overlook the weird leg movements.

Overall, I’ve enjoyed All Walls Must Fall even if there are some issues which can be fixed and improved in the future. It is highly enjoyable breathing the synaesthetic nightclub environments of the game with big dudes who are ready to flirt and fight all the time. inbetweengames deserves respect by creating such a different and charming environment even if it is filled with same characters.

All Walls Must Fall was reviewed using a Steam key provided by the publisher.

All Walls Must Fall Review

I've enjoyed All Walls Must Fall even if there are some issues which can be fixed and improved in the future. It is highly enjoyable breathing the synaesthetic nightclub environments of the game with big dudes who are ready to flirt and fight all the time. inbetweengames deserves respect by creating such a different and charming environment.