Solo is an atmospheric puzzle game developed and published by Team Gotham. The game is now available for PC on Steam, Humble Store and GOG, and thus, I am lucky enough to lay my hands and eyes on this title, and share my first impressions with you.

Solo’s main theme reflects a loving relationship and the main purpose of the game is to explore small islands which again reflect the way you look at love itself. Solo was born from the painful break-up story of creative director Juan de la Torre as the team decided to create an experience which expresses how we feel about love. 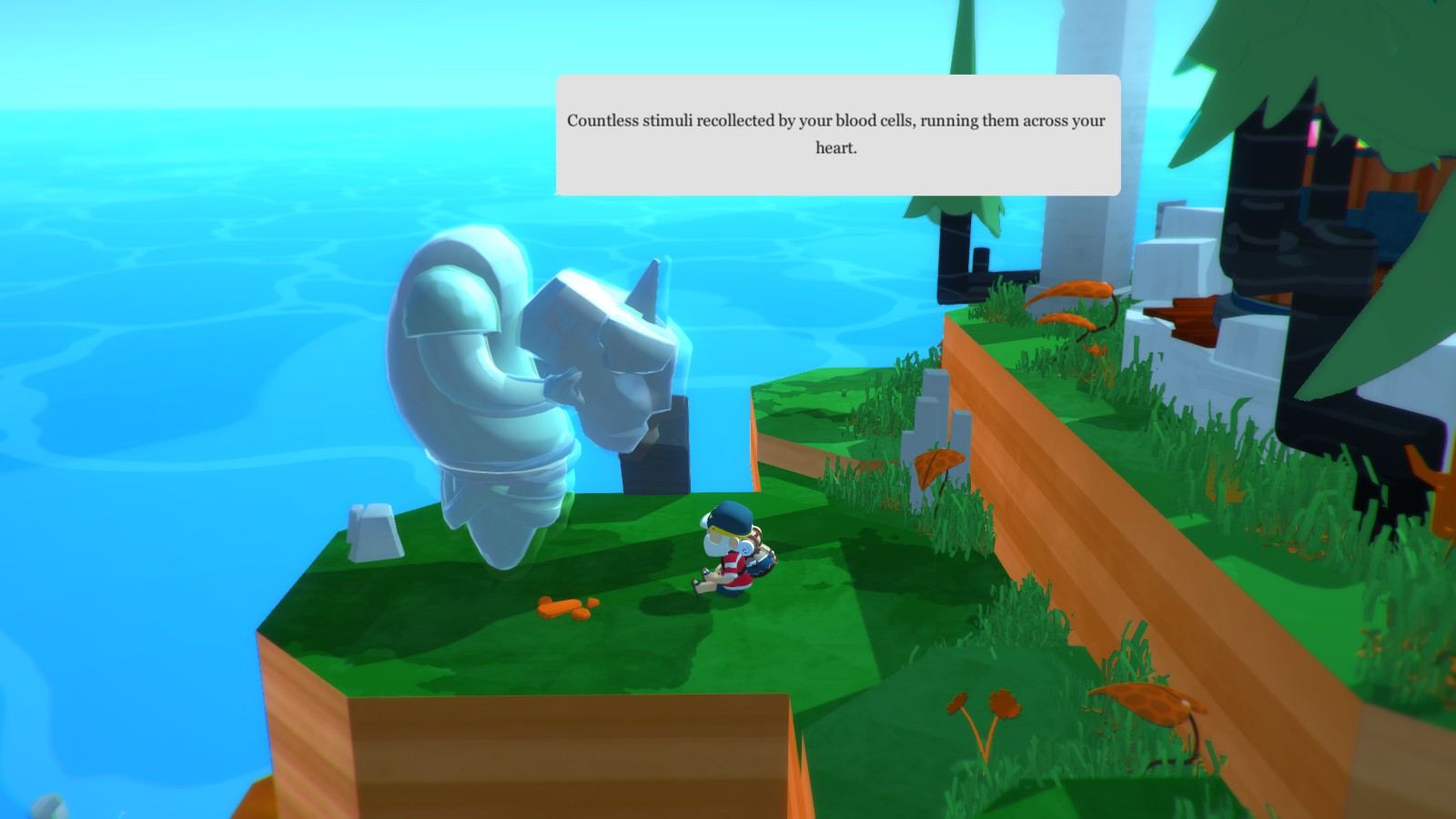 Solo is a personal game, so personal that it requires you to type in your lover’s name at the beginning. By choosing your character, you start your journey. I say it is personal, because the game asks you questions about how you feel about love during your journey, and you will choose one of the multiple answers according to your feelings about love, your partners and such.

Solo is a saddening game, regardless of your own experiences of love. Maybe because it is a product of a painful break-up or maybe because it is in love’s nature. But, get ready for some harsh moments while your character is chatting with his/her ghost or reading some letters which can be found on the islands.

On the islands, you will come across to yourself or the ghost of yourself usually in a saddening situation. You can sit with yourself and have a little chat, share a swing or simply watch them. 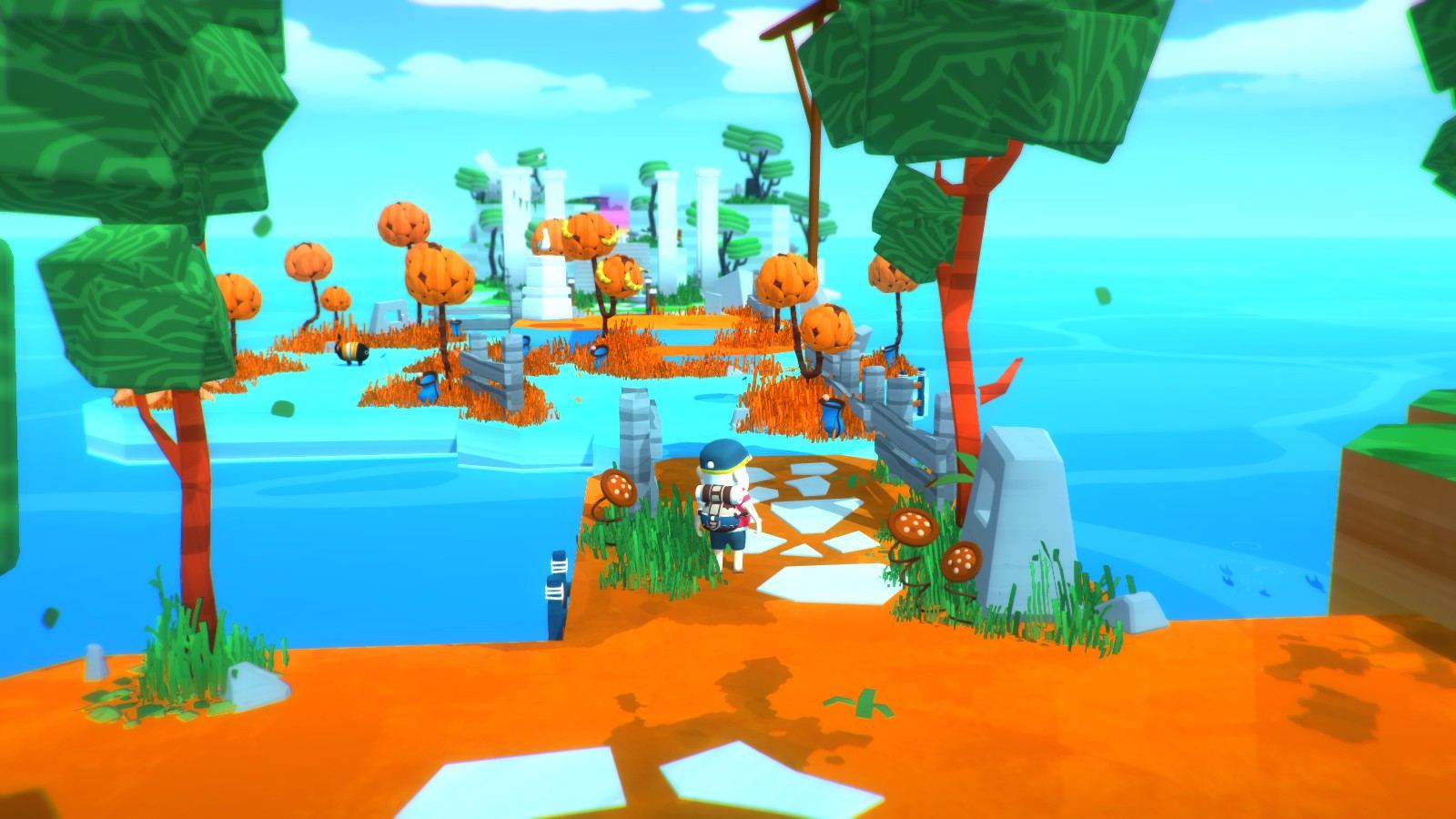 Solo starts with one colorful island and the main task is to awake the Totem which will ask you a personal question about love. Every island has its own Totem and a beacon which will awake it. By lighting the beacon, you will wake the Totem. After answering the question, you will turn some wheels and another small island will surface from the water for you to explore and answer another question in the end. Well, it is pretty much it. Lighting the beacon will get harder and harder, yet it feels repetitive after a while.

When it comes to the visuals of Solo, I can easily say that they are as charming as it is possible. Every island will welcome you with lively and charming colors. Solo is sedative while the islands are inhabited with objects and creatures you can interact with. You can even pet animals and play guitar to them. But, I can say that this feature is very limited.

The soundtrack of Solo, I can easily say that they empower the narrative and the general feeling of the game, and always in a harmony with the gameplay.

During your journey, the obstacles on your way will get harder and harder to beat. New objects and new ways to achieve your goal will be given to you and will keep the gameplay fresh. You will use a parachute to fly between islands, you will combine cubes to climb higher places and you will use a magic staff to move objects which are far away. 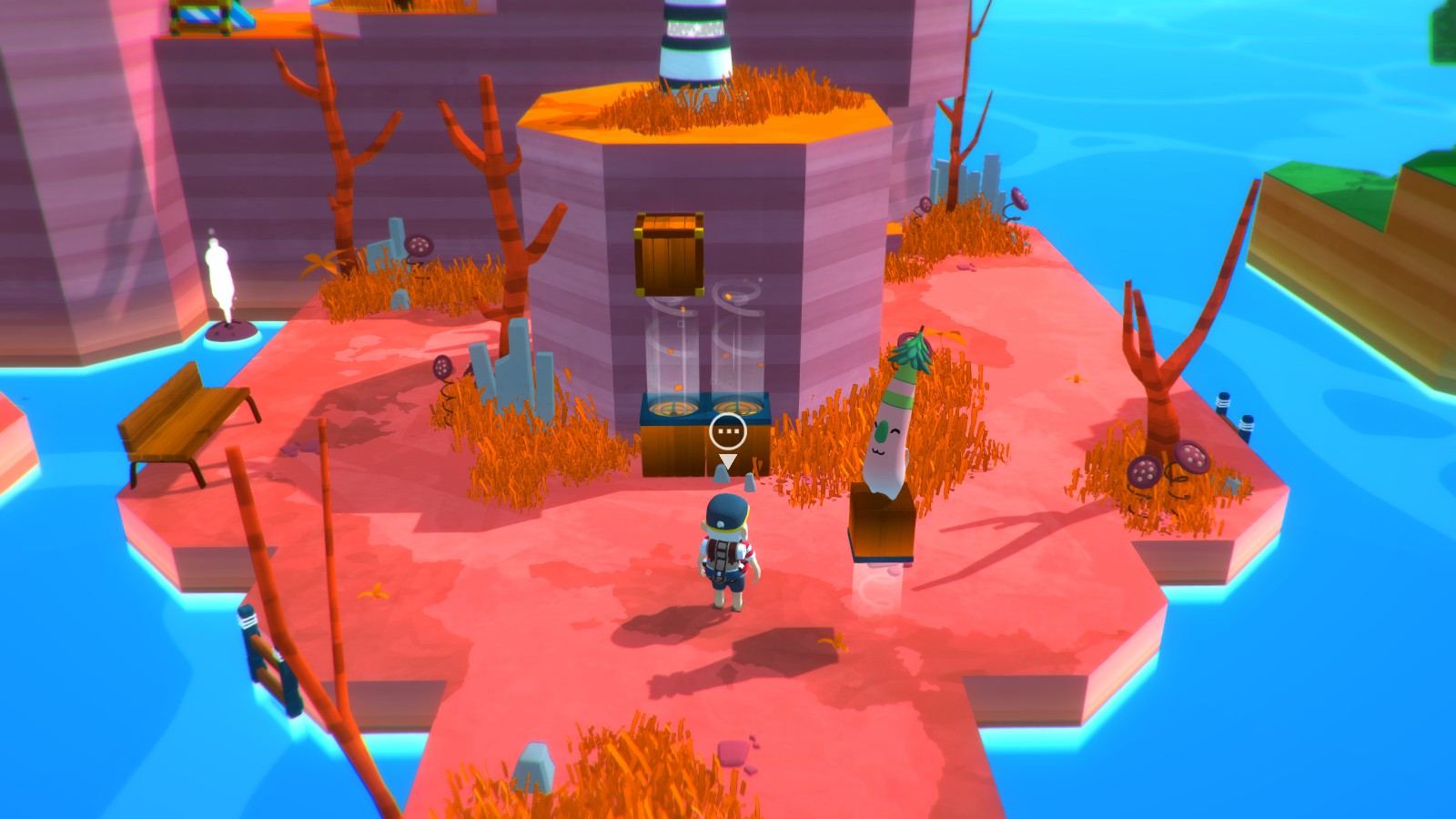 Well, when it comes to that magic staff, things get a little bit confusing. Controlling the staff is somehow impossible with a mouse since it went crazy whenever I tried to use it. You need to select the object which you want to move with the staff which was all right. The second step is to move the item where you want it to be and this was what made me delirious. The item won’t stop moving like it is haunted, circling around. It is impossible to place it where it must be and it is one of the most annoying bugs I’ve ever seen. Hopefully, it is something which can be fixed and won’t ruin any gameplay experiences.

The other downer is the camera angle of the game. It gives you an ultimate hard time to control the camera. It feels weird and clumsy and a problem which may ruin the gameplay experience for some. When magic staff issue combines with weird camera issue, the game becomes almost unplayable.

The other charming part of the game is the cubes. They work the same way as they work in Talos Principle. They have little fans on them and can be used more than one way while solving the puzzles. They are highly enjoyable and it was a great pleasure to see them again in Solo. But trying to move them, not so much. 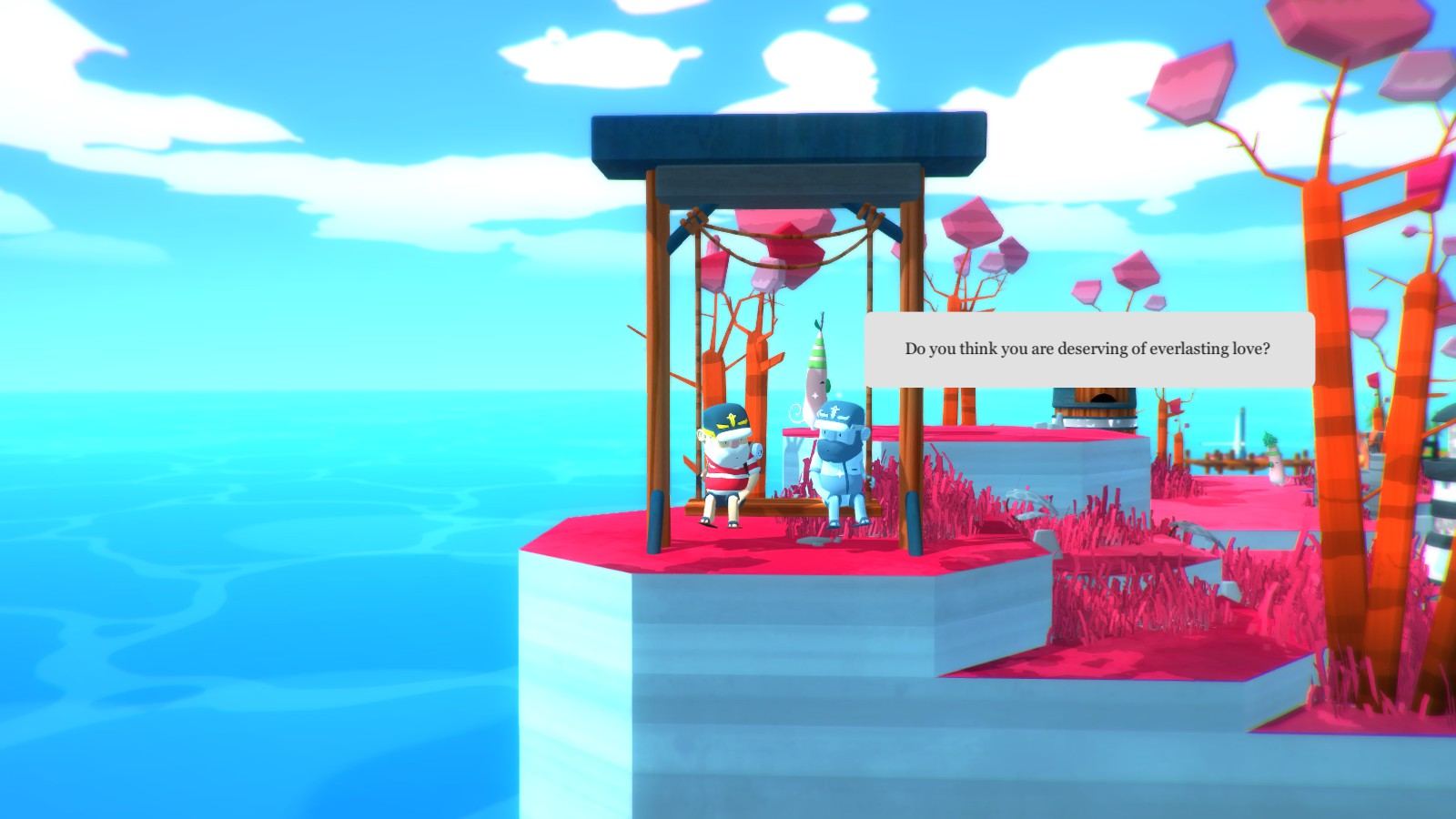 If you are having a hard time during puzzles, a little creature is there to help and guide you. I can say that Solo is an easy game when it comes to puzzles and could be much more easier without the magic staff bug, but the real pleasure is the narrative of the game. Combining such a personal narrative with such warming colors is something everybody should experience.

Where does love stands in your life? Is it something you cherish or is it the ultimate cause of pain? Does it worth it or is it just one of the overrated things like any other feeling? Well, time to figure it out, I guess. A game which is created based on someone’s heartbreaking story is now a personal experience waiting for you to uncover its secrets along with your thoughts.

Solo is a now available on Steam and if you want to experience a very personal narrative game about love, I recommend you to go ahead and give it a try by visiting here.

Solo was reviewed using a Steam key provided by the publisher.

If you want to experience a very personal narrative game about love, I recommend you to go ahead and give it a try.

When live streaming, you don’t forget to keep your microphone unmuted when not using it ...
By Haktan Yılmaz
44 mins ago

Following rumors that Elden Ring will be showing at an Xbox event this month, Xbox ...
By Tuba Çetin
1 hour ago

The loading times of Grand Theft Auto 5 have been the subject of many jokes ...
By Tuba Çetin
2 hours ago

This whole thing started when Neil Gaiman made a post on Twitter. Neil asked people ...
By Yusuf Tarık Kayhan
5 hours ago

Tom Holland spoke about his role of Nathan Drake in the Uncharted Movie, apparently, he ...
By Haktan Yılmaz
23 hours ago

Google Stadia, a cloud-based gaming platform where you can play your games over the internet. ...
By Haktan Yılmaz
1 day ago

Jatin Patel is an iOS developer working on some projects for his YouTube channel. His ...
By Tuba Çetin
1 day ago

Apple is asking a group of companies to provide confidential information on how much money ...
By Tuba Çetin
1 day ago
0 %