Scavengers Studio’s battle royale title Darwin Project previously hit Steam Early Access. I am lucky enough to lay my hands and eyes on this title, and share my first and clearly early impressions with you.

Battle royale seems like the thing we were missing for a long time and we had no idea that we were even missing it. Now, it is like the long-lost child to the family, and a highly amusing one. I hereby admit that Darwin Project is my first battle royale experience, and I am not even a competitive person.

The thing is that battle royale is so popular and there are highly successful titles around now, if you are up to create a new one, you need to make something different in order to draw the community’s attention. Scavengers Studio achieved that by taking the environment up north, to the Northern Canadian Rockies where the land is frozen and the snow is crushing under your feet.

The story of the game is compelling since it sci-fi based. The Ice Age is around the corner and thus, a new project and experiment rises from the devilish minds of more powerful people than you. Darwin Project is a half science experiment half live-entertainment show where they put you in an arena with 9 other people. While the others and the cruel cold are trying to kill you, you will try to be the last man standing.

The first thing I must mention about Darwin Project that it is indeed a game for streamers, since it offers you to link your Twitch or Mixer right in the main menu. You will be the judge if it is a good or bad idea, but seems like battle royale needs audience since it is basically a quick match.

You can also customize your character in the menu; you can select the gender, colors of the costume, melee weapon, hair color and such. Darwin Project has a friendly UI which has no complications. You can also customize your crafting wheel which I like very much. This is also one of the distinctive features of Darwin Project since you can lay traps, use smoke bombs and such, and you can craft them by collecting certain items during the match. The next thing is the lobby where you can try out your weapons and special powers before the battle starts. 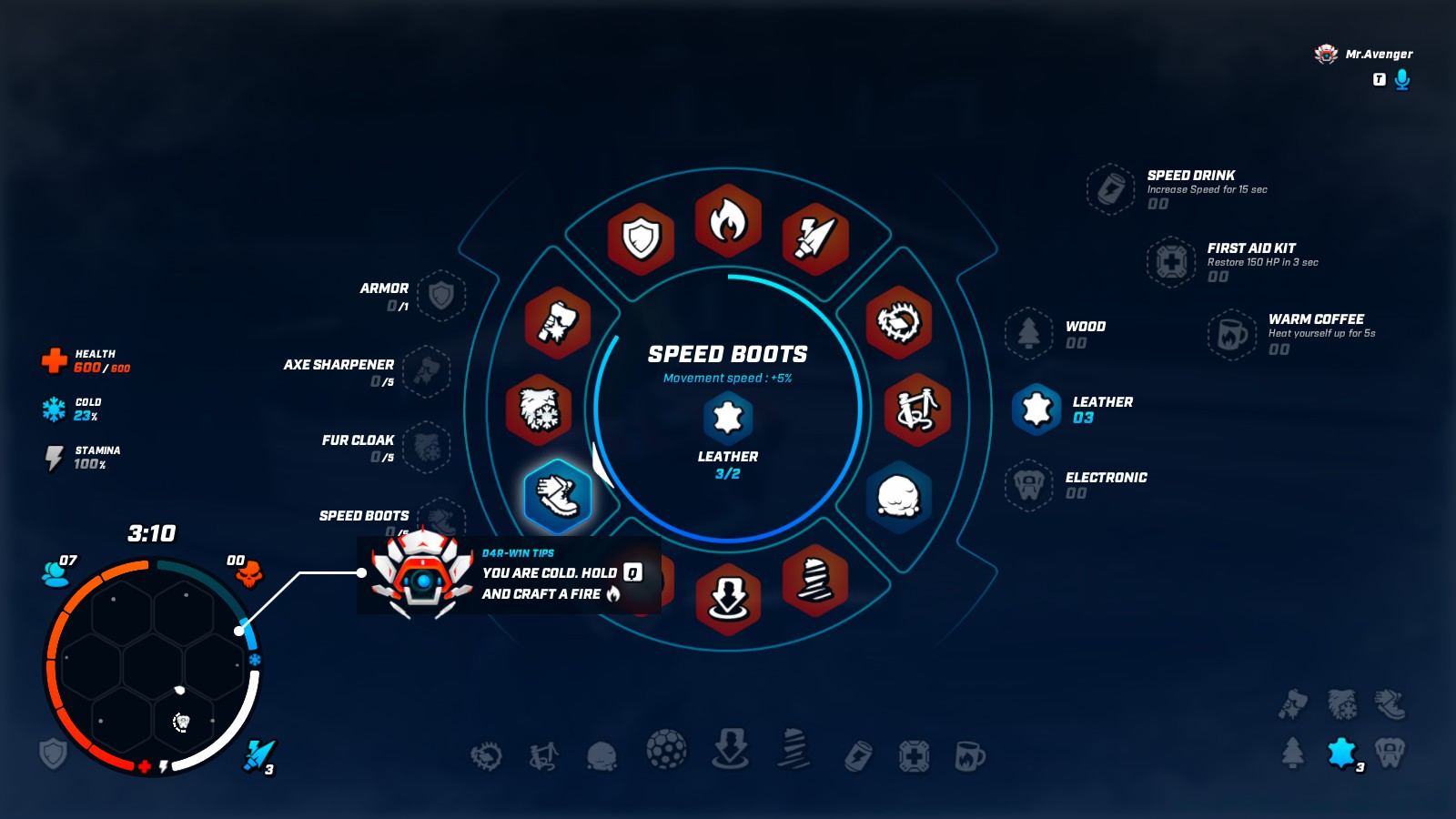 The crafting wheel is a great add-on and it takes little time to create items if you have enough resources. It diversifies the gameplay and enables us to use different strategies during our battle of survival. Along with traps, weapons and bombs, you can also craft armors and shields for your protection.

When 10 people are ready, the countdown starts and you find yourself in the wilderness of Canadian Rockies. Snow is everywhere, so are your enemies. The arena is divided into 7 sections and your enemies are scattered around the map. The first thing you realize that there are trees to cut and you need to collect resources in order to survive in this game. Collecting resources and crafting does not take long and enables you to create different strategies. But every sound you make and every item you collect is a sign you give to your enemies. You will be easy to locate and marked, and eventually killed. There are also ways that you can be seen on the mini-map by other players like interacting with open chests. You can even find people by following their footprints on the snow. Nobody is safe.

Not long after, you will see that there are buildings in the map which contains other resources to collect like leathers, electronics and such. But, you are not the only one who needs them and a building draws other players’ attention. You need to be fast, but you hear a warning. The map is complex, the area is not clear, your vision is blocked by long trees, rocks and hills. The area will be forbidden soon and you need to leave this part of the map as soon as possible. Oh wait, now you are freezing! You need fire, but first, you need wood! And now there is a target on your back! What! Where did it all go wrong? 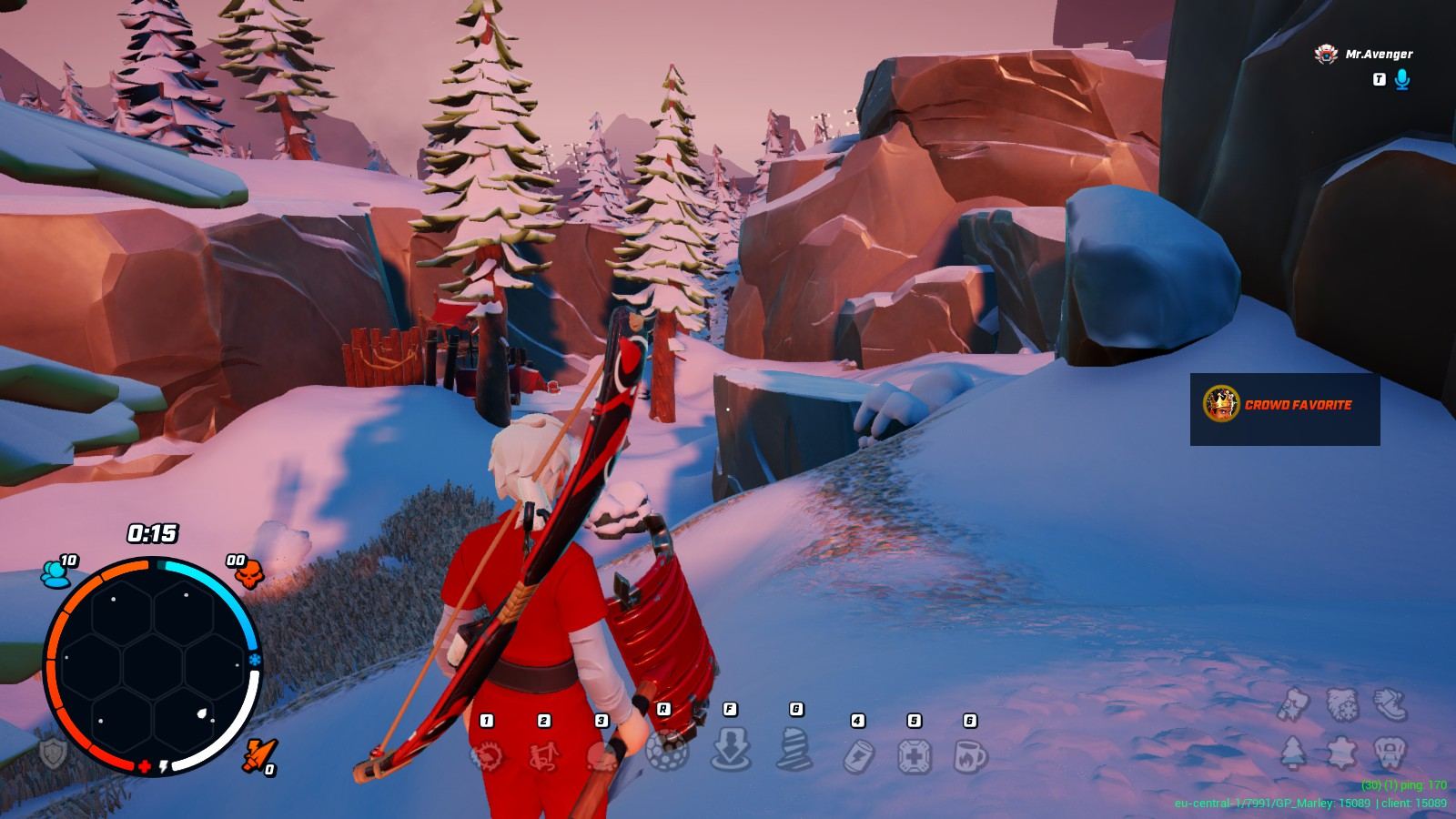 When you understand the basic mechanics of the game, it becomes highly enjoyable. You randomly spawn and there will be resources where you spawn, so this is not a thing to worry about. The enemies are the real deal and if it goes the way you hope, you are the real deal. Darwin Projects offers a highly enjoyable fighting mechanism. You can try to kill your enemies from afar with arrows, you can lay traps on their way, you can smoke-bomb them, or you can go ahead and shovel them in their faces. Falling from high is not a thing to worry about, but a shield is always a good idea during face-to-face combat.

The real charming part of Darwin Project is the Director. You see, this is also an entertainment show to please others with your blood. Every match has another player, the 11th one which is a drone which reminds you that the Director is always in control and can change the flow of the battle. Director has the ability to heal players and warm them up if it is needed in order to mix things up and give the audience a more exciting show. He can even go ahead and launch a nuke for the sake of the show. He is the unpredictable trouble-maker of the show and saves the game when it goes boring. It is a great add-on, if you ask me. The Director is the feature that puts a distinctive difference between Darwin Project and other battle royale games around. Your gameplay will never be about just killing others and crafting items. You can always trust Director to spice things up.

At the end of every match, you will be voted by viewers and gain fans according to your success during your battle. There are hungry viewers there who are carving for some action and they have a huge effect on the game. They can change the flow by selecting favorites and even keep you alive by sending a request to the Director. This feature feeds the main idea behind the story. There is also a chance that you are the Director and do all these things I’ve mentioned above during the gameplay. 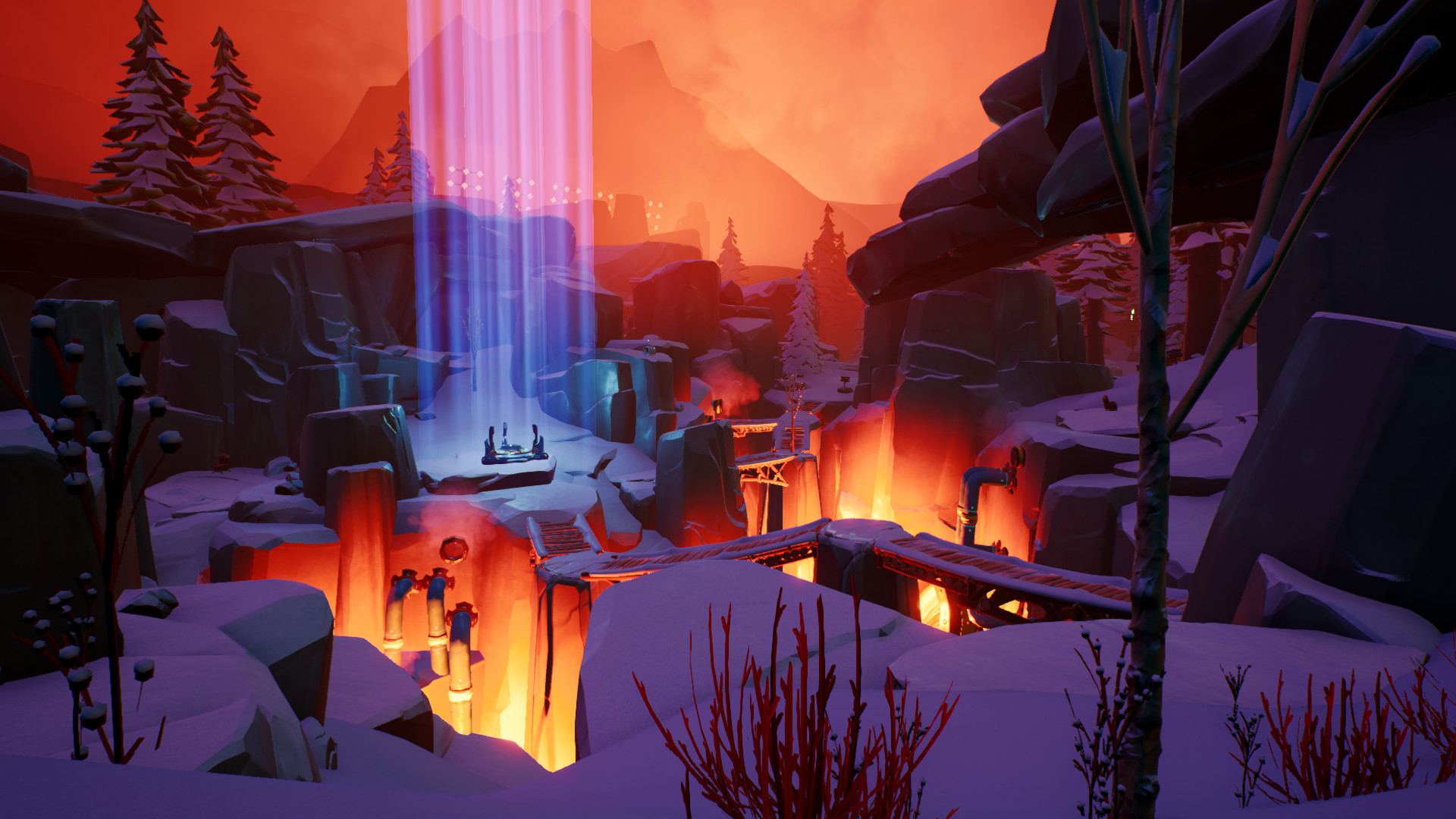 When it comes to visual side of the Darwin Project, it can be polished more and there is still time for that. The game is still in Early Access and this means most of what I’ve seen during may gameplay may change to something else. Yet, it looks beautiful with warm colors. I would love a more detailed character design, if I must say.

Darwin Project will surely compete with PUBG and Fortnite. Fortine mostly. Yet it has distinctive features which makes it a totally different experience. Spectator Interactions and Show Director are great add-ons for a battle royale title, yet there is only one mode we can try out for now. Darwin Project needs more modes and maps, and I am pretty sure they are on the way since the game is aiming a summer 2018 launch.

I’ve enjoyed my experience of Darwin Project and I am sure the full game will be much more enjoyable with new modes, powers, features and polished visuals. Darwin Project is now purchasable as an Early Access title and if you like what you read, visit here to take a look at the game’s Steam page.

Darwin Project was reviewed using the Steam key provided by the publisher.