Boo! Greedy Kid is an 2D action puzzle game developed by Flying Oak Games and published by Plug In Digital. The game is now available on Steam and I am lucky enough to lay my hands and eyes on this title, and share my first impressions with you.

There’s a new punk kid in the house!

While playing Boo! Greedy Kid, we step into the shoes of a mischievous “small brat” who is clearly addicted to soda. There is nothing in this world which can stop him from having his soda. No money to buy soda? Well, go ahead and frighten people (old people mostly) to death, take their money and buy some soda! Well, this greed of us will not remain unpunished. Soon after, there will be cops after us and we will try to make our way to the greatest soda treasure of all times while they are after us. 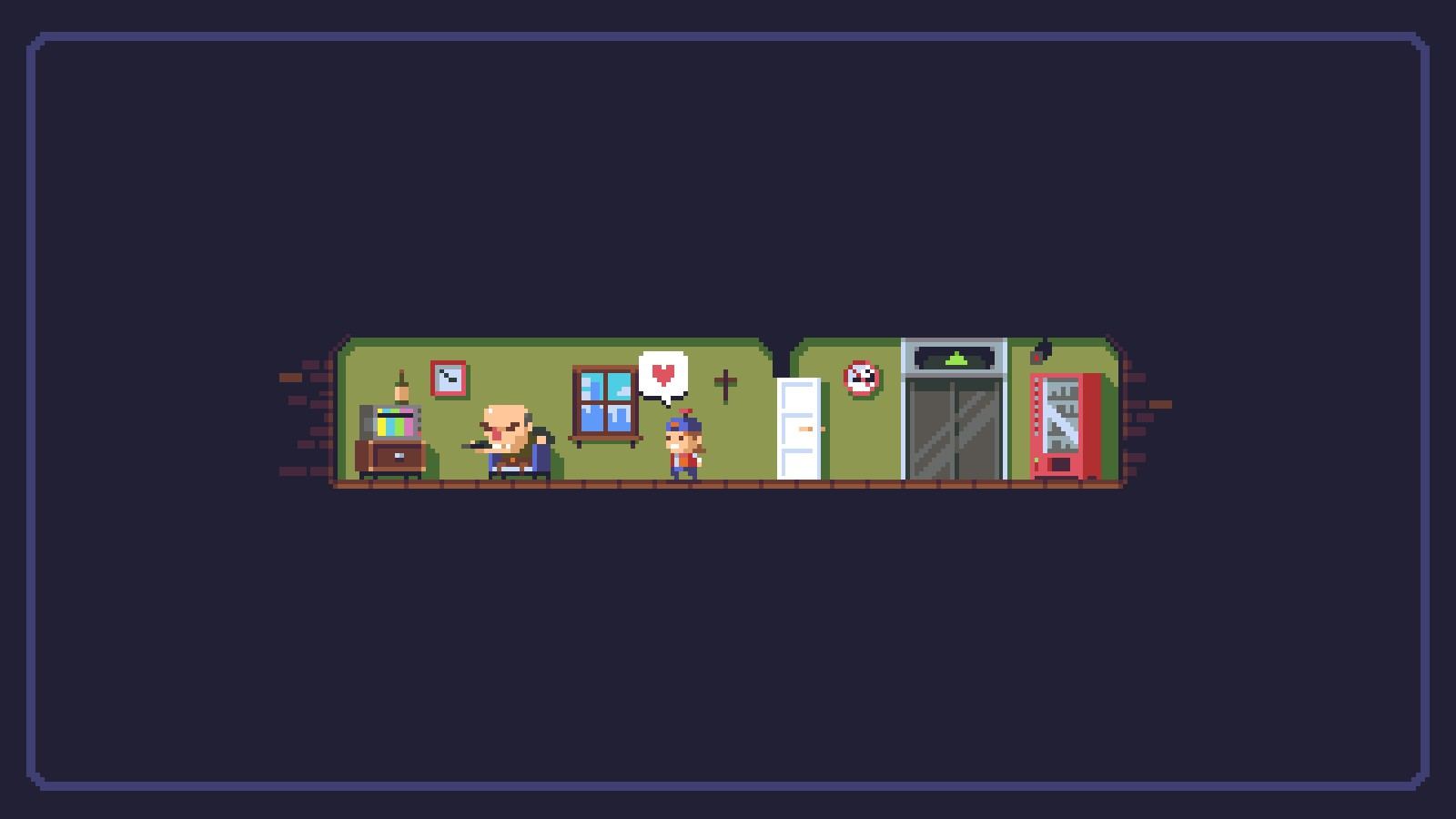 The story part of the game is mostly like I’ve described above. That is all, unless the ending. The story of the game is not the main mechanic and you will not feel like you are following a story or making progress during the game. It is just a kid without money who deliriously needs soda.

The game starts with easy levels in which you can frighten only one old person. After a while, you will have to deal with more than one old resident, nurses and cops. Every one of them has a different way of freaking out. Some will go with one scream, some will need more than one. But beware, if there is not a cop in the level, he may appear after you start to knock down poor people for your own temporary, earthly needs.

Along with that, they have various reactions to your scream. While some will go delirious and bump you more than once and this way, make your health bar reduce. Some will fall right there and I think this is kind of sad. Specially the old lady who made me feel like a worthless bastard. The leg movement after they fell makes everything worse. But, the boy needs his soda and we are going to get it.

The game is designed as levels and in every level, you need to scare everybody and get their money before you loose all your hearts. There are doors which can be used between rooms and levels of the apartment. Old ladies, gentlemen, cops and nurses will also move around. That means you need to determine your strategy before you start scaring people. While they are not afraid, you can easily roam. Along with that, you can turn into a hat I guess and hide in certain places like bookcases and armchairs. Rolling yourself is also another option while escaping.

Nurses also has the ability of reviving these poor old people after you scare and knock them down. You always need to keep an eye on the nurses, cops and doors.

The gameplay mostly works like the way I’ve mentioned above. Along with that, you always have to be fast and smart since the cops are ruthless and it is highly easy to die while playing Boo! Greedy Kid. Elevators will move you to the next level and your stats will appear on the screen. There is a time-counter and luckily, it is not backwards. It only tells in how much time you were able to finish the level. It mostly takes 30 secs to finish a level, but I admit that some of the levels took more than that for me. Also, your success in a level will be rated with stars, 3 at most. Beating the level will grand you one star. If you collect the required money and finish the game on time, you will get three. If you are a perfectionist, this may be annoying.

Boo! Greedy Kid reminded me one of my childhood favorites: Neighbours from Hell. The same basic goal works as the core idea of these two titles: getting on people’s nerves and pissing them off. This greedy kid can scream, roll and taunt people with his ass. Yes, show them your ass and these old people will loose their minds. There is also an option which you can scare people by screaming into your microphone.

The control mechanism of Boo! Greedy Kid is highly easy and works smoothly. Only with keyboard or a controller, you will be able to play the game. Oh, and shouting also works if you do not mind looking like a crazy person. Yet, it is something new and a great add-on which I admire. 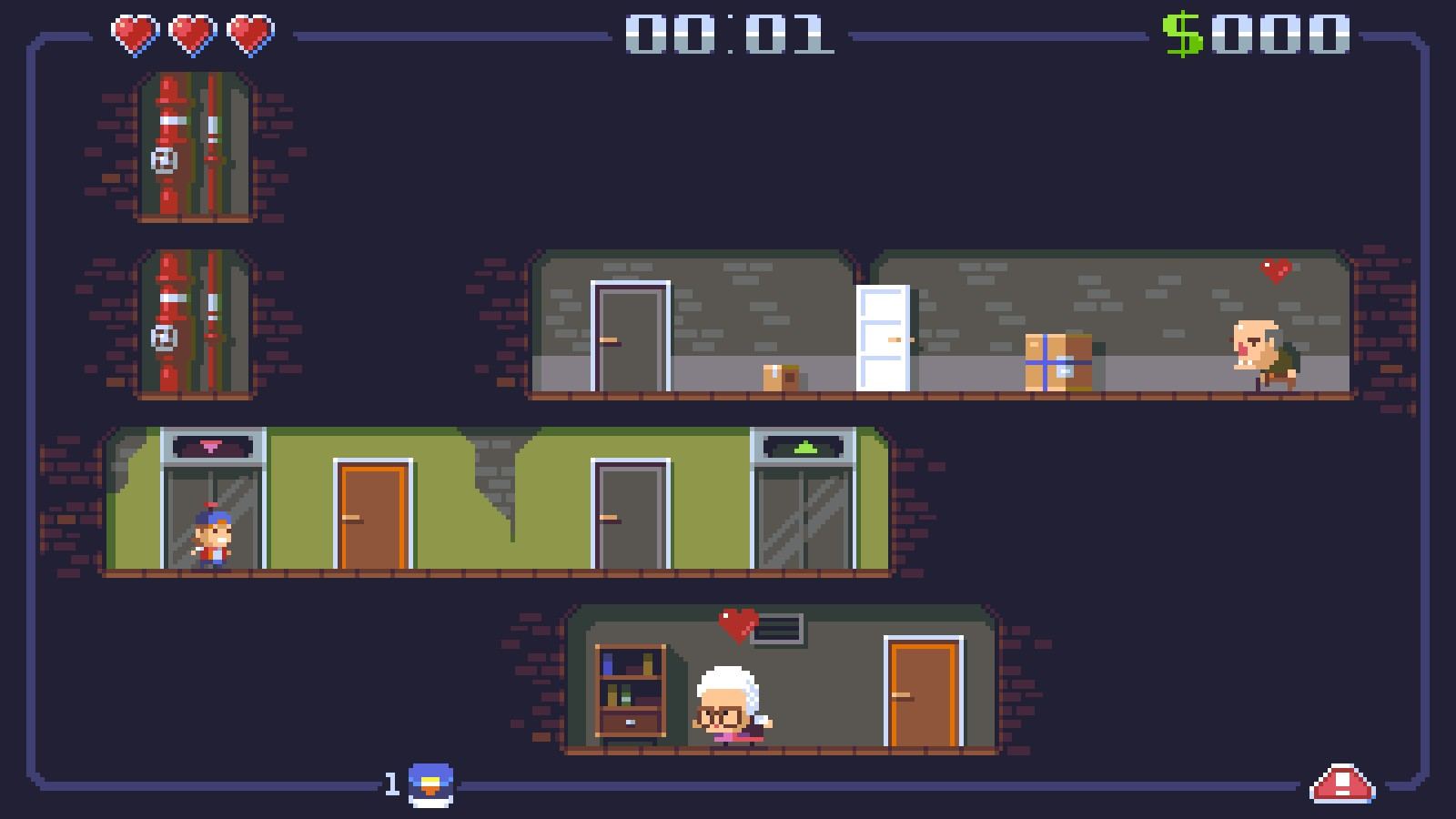 When it comes to environmental design, I must say that it gets boring after a while, since except from the add-ons, you are always visiting with the same place with same old people. Well, they have money and what we need is money. But, it would be nice to see something different from time to time. Graphics, on the other hand, looks mervellous for a pixelated game. The feeling of nostalgia is always there and soundtracks of the game is always in a harmony with that feeling. The environment and characters are very well detailed and everything looks charming. I would love to hear different soundtracks though, since they also feel repetitive after a while.

While playing Boo! Greedy Kid, I experienced no bugs, glitches or whatsoever. The game runs smoothly on PC and nothing can disturb the experience. The game also offers you a chance to create and share your own maps on Steam Workshop, if you are creative enough.

Overall, I highly enjoyed my gameplay while playing Boo! Greedy Kid, but I can not shake the feeling that it gets repetitive after a while. There are, after all, 100 levels to beat in this game. Maybe short gameplay periods can be a solution to this problem. The game offers a fun, enjoyable and unmoral gameplay. If you enjoy scaring old people and stealing their money, Boo! Greedy Kid is now available on Steam.

Boo! Greedy Kid was reviewed using a Steam key provided by the publisher.

I highly enjoyed my gameplay while playing Boo! Greedy Kid, but I can not shake the feeling that it gets repetitive after a while. If you enjoy scaring old people and stealing their money, Boo! Greedy Kid is now available on Steam.

The Pokémon Company is expected to celebrate the 25th anniversary of the series on February ...
By Tuba Çetin
12 mins ago

Harry Potter RPG, Hogwarts Legacy, has been postponed to 2022 to give the game the ...
By Tuba Çetin
40 mins ago