Slipgate Studios once again hit the road for a more enjoyable and improved version of Rad Rodgers. With the collaboration of THQ Nordic & 3D Realms, Rad Rogers launched on PC, PlayStation 4 and Xbox One today. I am lucky enough to lay my hands and eyes on this glorious title and share my first impressions with you.

If you are familiar with Rad Rodgers: World One, then you must be already feeling drawn to Rad Rodgers. If you are not, get ready to delve into the colorful, lively and dangerous world of Rad.

Rad is a cute little mischievous boy whose head is in the clouds. He only wants to spend his time playing video games, maybe too much since his mother is getting tired of him. After spending hours and hours sitting and playing video games in front of the screen, Rad takes the road to the dreamland. Not long after, he awakens to find his dusty console is back on. Suddenly, a vortex causes him to sucked into his TV, into the game. This is where our journey begins as Rad being the hero of his game. 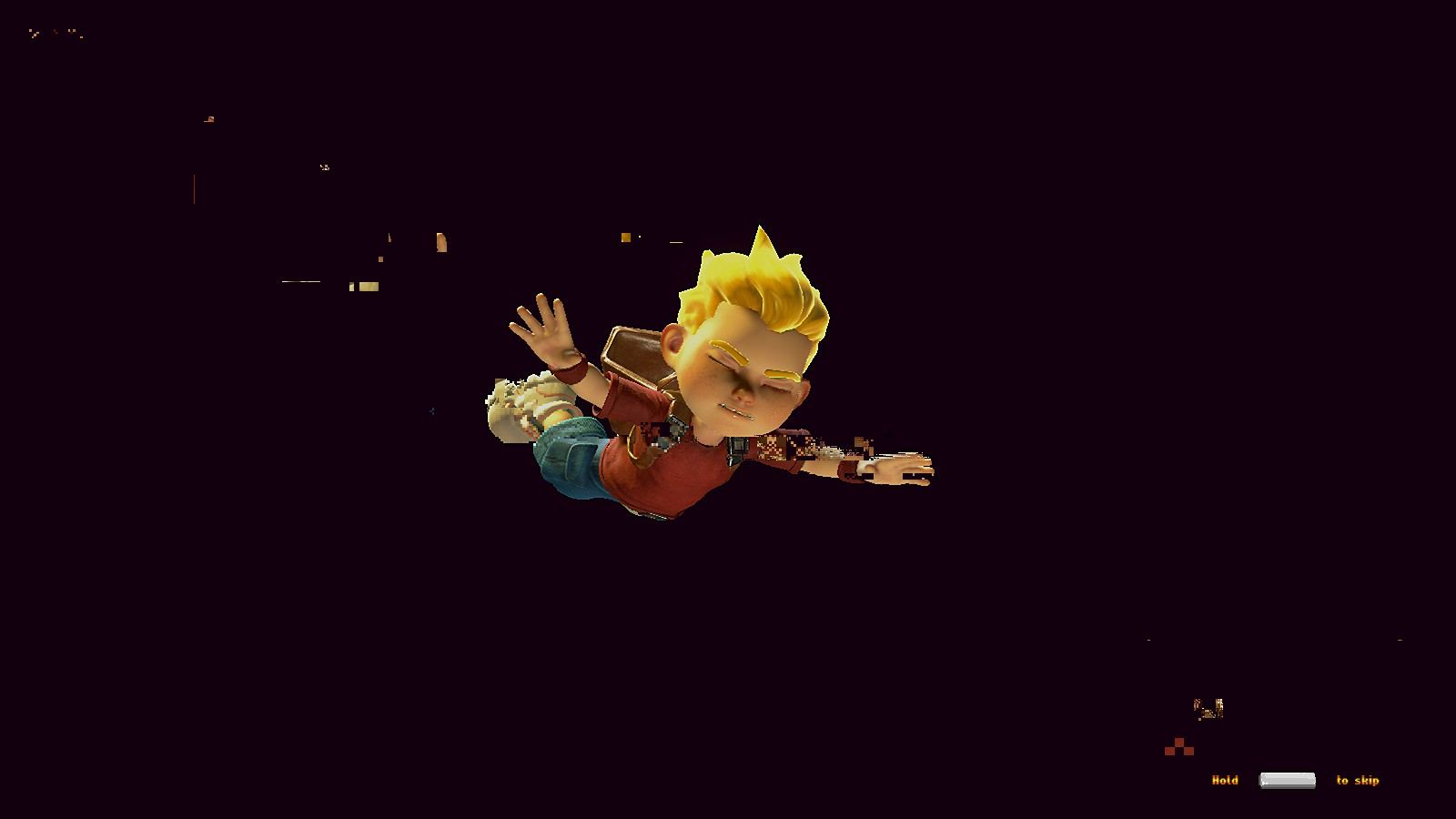 The moment the game begins, you will be fascinated by the beauty of it. I know other Rad game was also visually beautiful, but Rad Rodgers overtakes it, even overtakes most of the games I’ve played recently. I couldn’t help but compare it to Trine 2 & 3 in the sense of visual arts. It is a magical world with striking colors and environmental design. I was at least as excited as Rad when I stepped into this world.

Of course, our good old friend Dusty acts as our companion during the game with its strong arms and hands. Dusty is a huge help when it comes to fighting and is a good friend to talk to during our journey. It is also a fun add-on since he is a foul-mouthed slur machine which can tell you to shut your ‘pie hole’ from time to time.

Rad Rodgers is inspired by classics like Commander Keen, Conker, Ruff’n’Tumble & Jazz Jackrabbit and aims to bring back 90’s-era PC platformer. Together with Dusty, we start our highly enjoyable yet dangerous platformer journey. The world of the game swarms with enemies and you need to stand before them with your Bolt Blaster which have infinite ammo. Like enemies are not enough, you will also get hurt when you touch the water or any liquid if that matters.

During your gameplay, you will collect gems, hearts which will fill your health bar and various collectables which can be cosmetic items Rad can equip. Also, by visiting huts, you can equip various weapons which can be used for a limited time, like a magical wand, Excalibat, etc. The most important things you must collect are four hidden pieces. Without them, you won’t be able to complete the level. 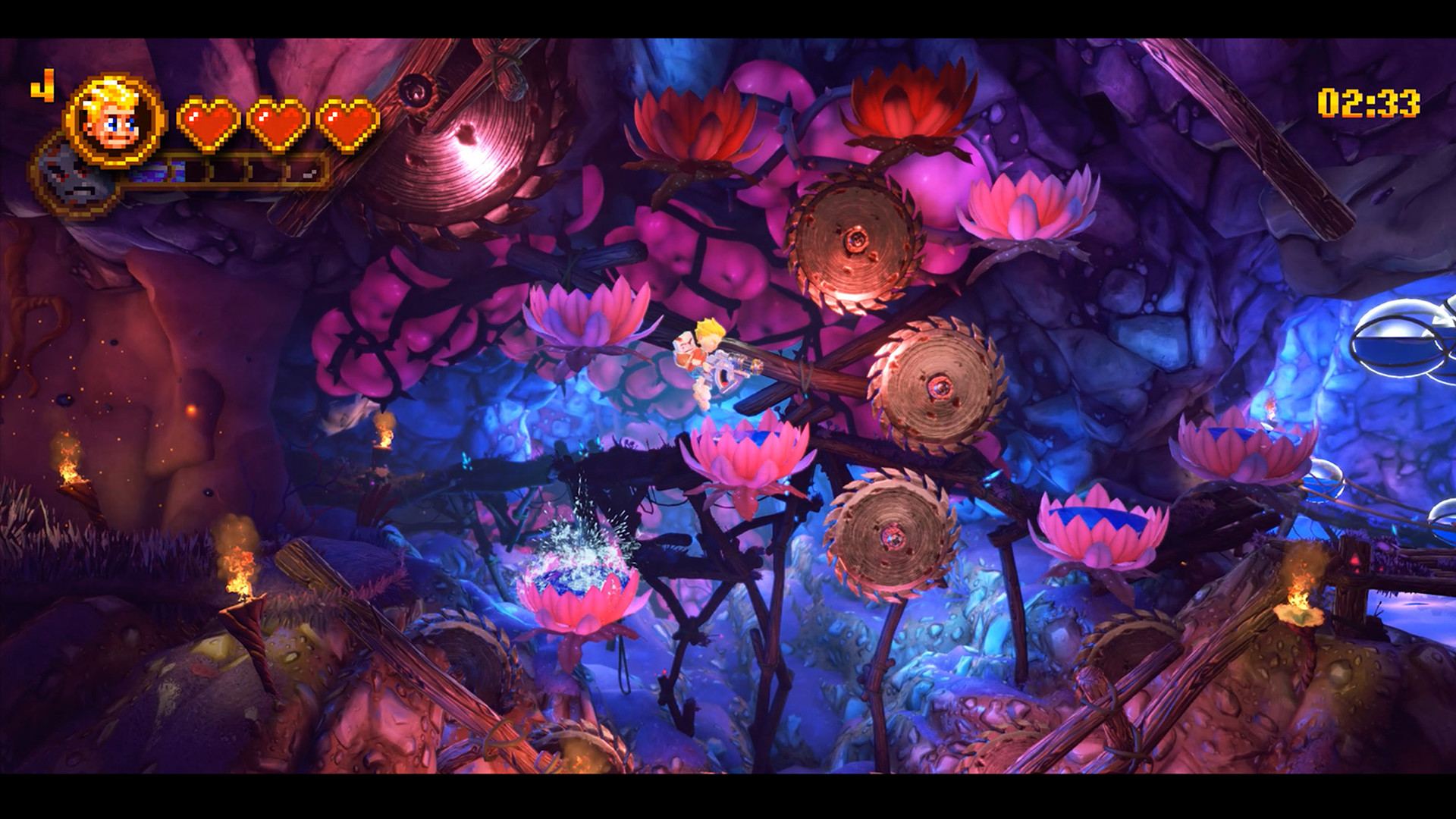 The most enjoyable thing I encountered during my gameplay is the pixelated parts of the game. Dusty tells you that lazy-head developers left their job unfinished, so you must finish it for them. Dusty needs to delve into this pixelated area and must restore the graphics of the game for you to continue your journey. They are called Pixelverses, a dangerous spacetime-breaking region that exists behind the game world. It is crazy fun and looks brilliant if you ask me. It gets harder and harder to beat this mini game of the game, yet it gets more enjoyable watching Dusty struggle.

This pixelated areas represents the decaying of the jungle and by fixing them, you get one step closer to your main goal:  save the jungle’s inhabitants and restore the Elder Tree as guardian of the land.

The platformer part of Rad Rodgers is highly enjoyable as it is challenging. Who put those pipes, saw blades and other deadly platforms to this jungle remains a mystery, but our goal is to get through them without getting hurt. The action part, on the other hand, is highly satisfying if you are playing the adult mode. Various enemy and attack types provide a more lively atmosphere and combat.

When it comes to soundtracks of the game, I must say that they are mesmerizing and I guarantee that you won’t get bored for even one second. Thanks to the soundtrack, excitement and rush piles up during the gameplay.

So, you must wondering if there are any spectacular changes to Rad Rodgers other than improvements. To begin with, from my point of view, the Excalibat from Rise of the Triad is a great add-on. The joy of smacking your enemies is incomparable. Yet, I know that this is not enough to draw your attention. Here are the brand new additions to the game: 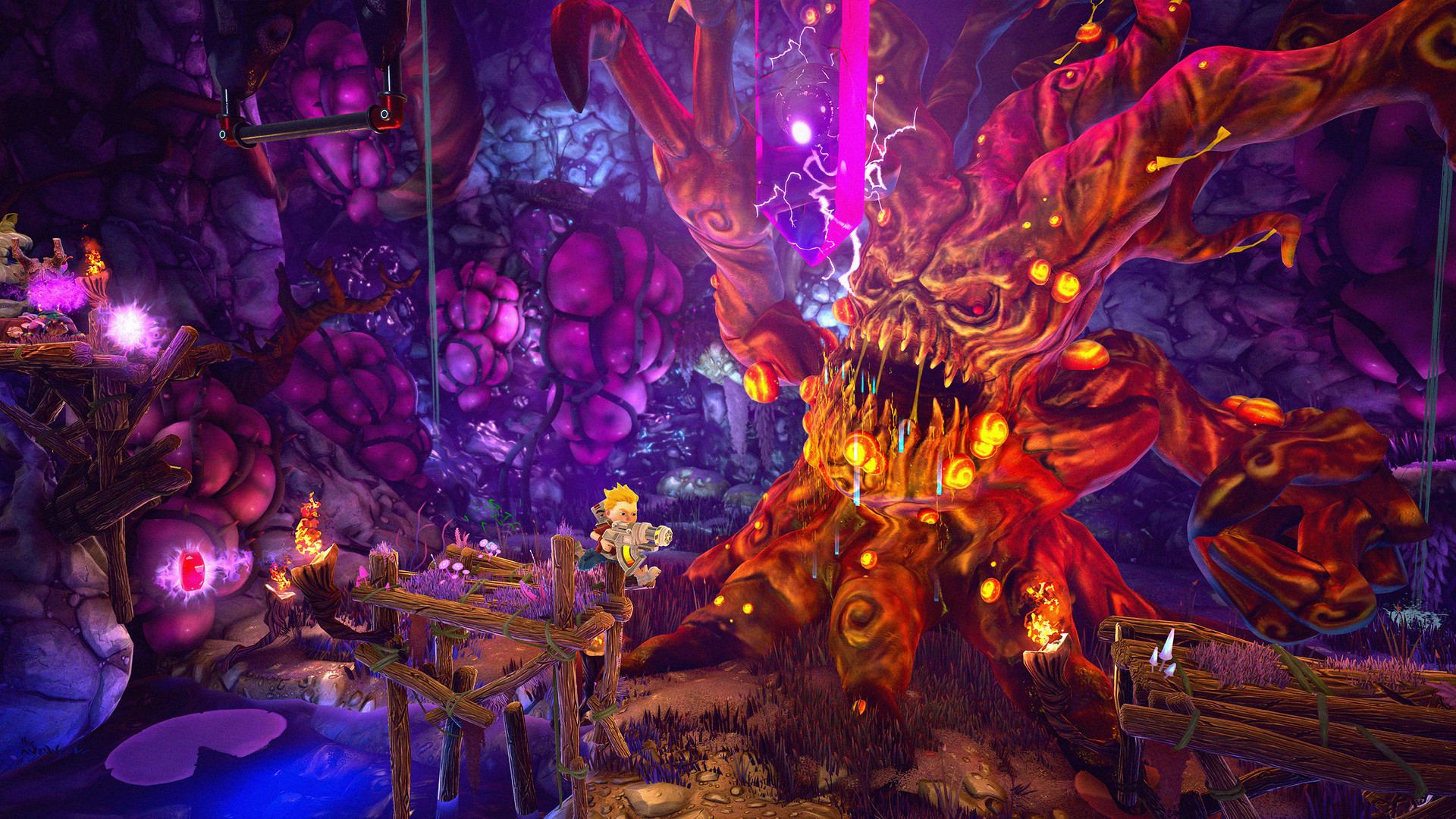 Leaderboards: Gain Scores at the end of each level, and battle with friends to reach the top of the leaderboards.

Hats: Unlock more than 20 different hats throughout the game, and customize Rad Rodgers.

New Unlockables: Unlock behind the scenes artwork throughout the game.

New Pixelverse Puzzles: Pixelverses have been redesigned, and now include brand new types of Puzzles.

Minibosses! Introducing 2 minibosses throughout the game.

Brand new weapon! The legendary “Excalibat” from Rise of the Triad, makes a return to Rad Rodgers. Become invincible and smack your way through hordes of enemies with the mighty Excalibat.

Overall, I can easily say that Rad Rodgers is a bless. It is your decision to make if Rad Rodgers really needed improvements, but from my point of view, the new additions make the game more enjoyable and take it to another level. If you already own the game on PC, you will get a free update to get all the improvements and additional content.

Rad Rodgers is now available on Steam and if you want to try it out, you can visit here.

I can easily say that Rad Rodgers is a bless. It is your decision to make if Rad Rodgers really needed improvements, but from my point of view, the new additions make the game more enjoyable and take it to another level.