Many genres from other art forms has been mixed up with other different disciplines in order to create something new and innovative. It has been like this for many years now especially in literature, music, cinema and many other art forms. And video games, as an art form themselves if you ask me, have experienced the same transformation. ‘Mixtures’ of different game genres emerged from many developer studios. Rather than developing one type of game with only one focus, developers from these studios have improved the future of gaming industry. And today, we stand in front of a good example of this ‘improvement’. SpellForce 3, latest game of Grimlore, THQ Nordic, latest example of the SpellForce franchise and the game which mixes the RTS and RPG elements is here. And it offers a unique taste with a good and balanced mixture of these two genres and their elements with beautifully designed music and visuals. 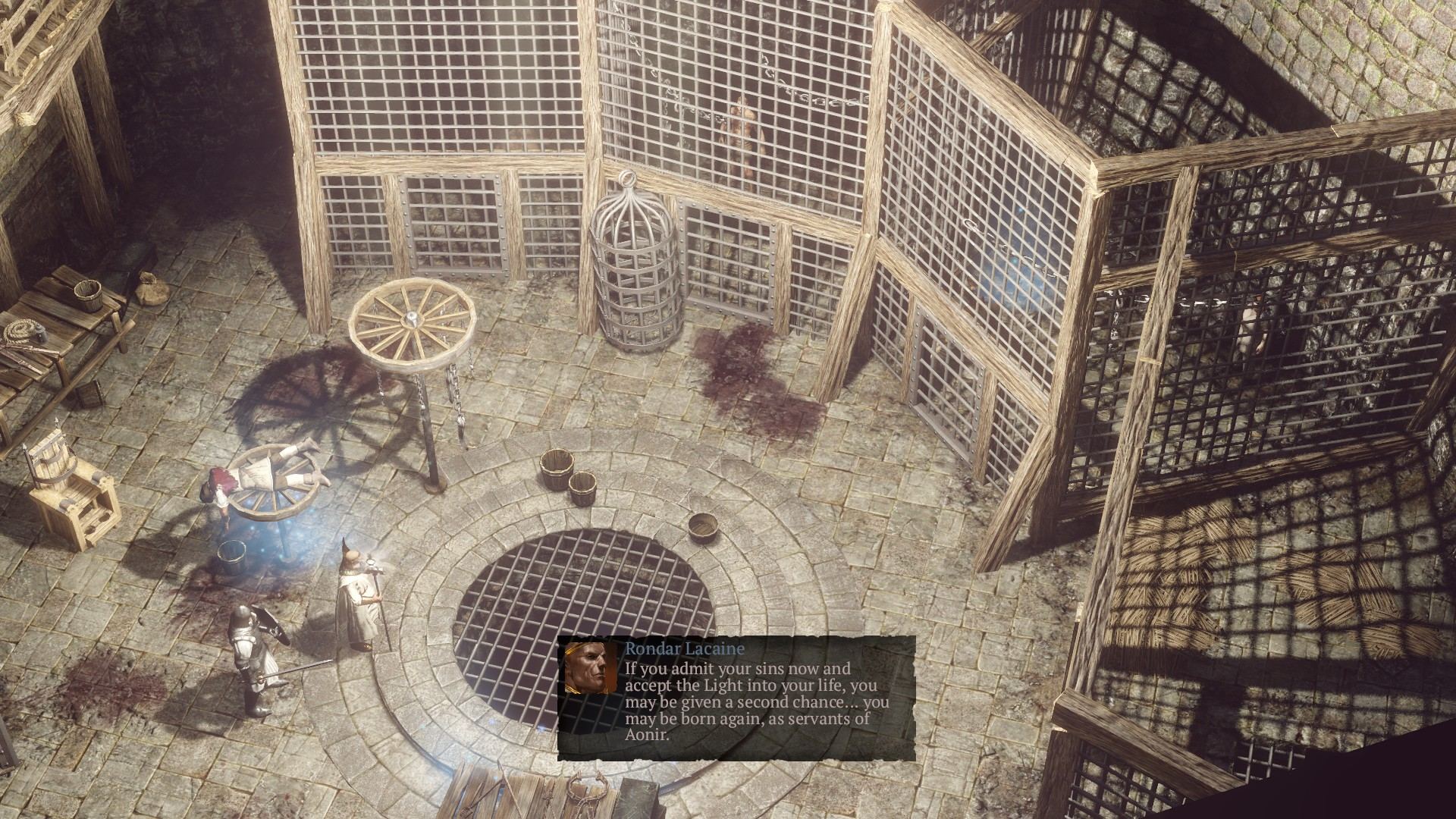 As a person who never had the chance to play any other SpellForce game, I was a little skeptical towards SpellForce 3. In the past, I had seen many RTS – RPG mesh ups. Personally, I was a big fan of the impact of the hero management mechanic of Warcraft 3 on the RTS side of the game. And I can easily say that I still am a huge fan of this. A well balanced hero management with RTS elements are impressively satisfying when it is done correctly. I cannot even tell you guys how many hours I had spent in Custom Maps of that game. And now, I stand in the same position with this one. 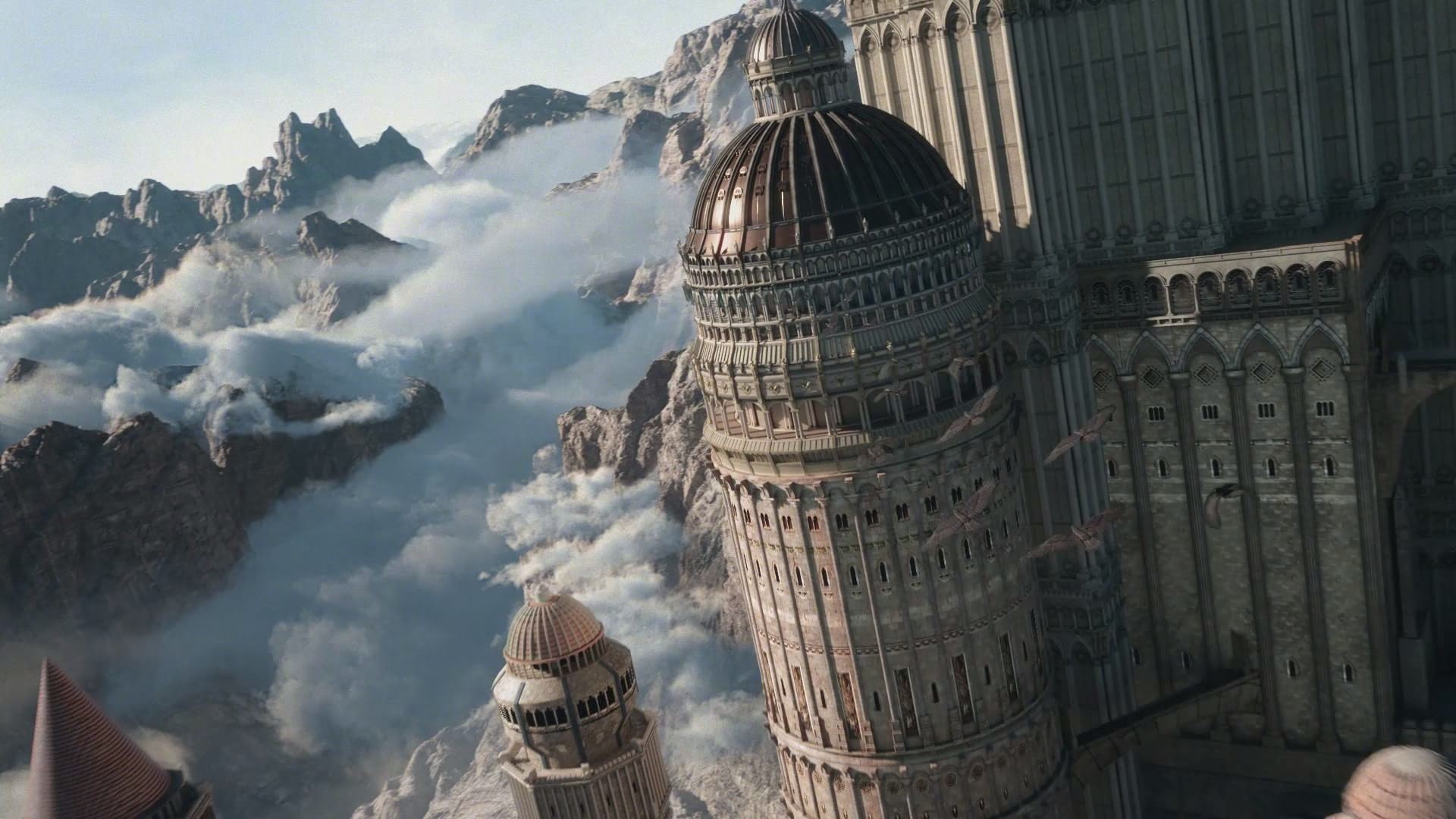 A familiar but slightly different taste

Before we start, I would like to tell you guys that I didn’t have the enough time to finish the main story in SpellForce 3 . Not because I have been a lazy bastard, but because the game itself offers a huge RPG game with tasty RTS sequences. And the main campaign requires so much time to finish. In order to fully experience the game, one should probably spend weeks. And I apologize that I didn’t want to rush the main story because I really wanted to enjoy the game. Just like what you will do when you get it, believe me. So, let’s start talking about the game itself, shall we?

Let’s start with the character creation and the main characters of the game. The game starts with a quick sequence where you control a couple of special characters. This part can be considered as the tutorial part. It takes a little time when you start creating your own character. Unfortunately, when you start creating your character, you realize that there are not many choices. The customization is not really solid to be honest. But, on the other hand, this is an isometric RTS game. So you won’t be watching your character’s eye animations when you are trying to manage your army and your heroes.

After you jump into the game, you will see that SpellForce 3 offers a feast for the eyes. Graphics and the level designing is gorgeous. When I started walking arond the Greykeep, I couldn’t help myself and started watching around. This is, of course, a plus for an RTS game. Comparing it with other open world RPG games would be unnecessary if you ask me.

The story starts, and you start running around, getting quests and completing missions. Just the ordinary stuff. If you are a RPG lover, you won’t find anything new, at least at first. The game starts showing itself when you get your first mission which will force you to discover the RTS side of the game. 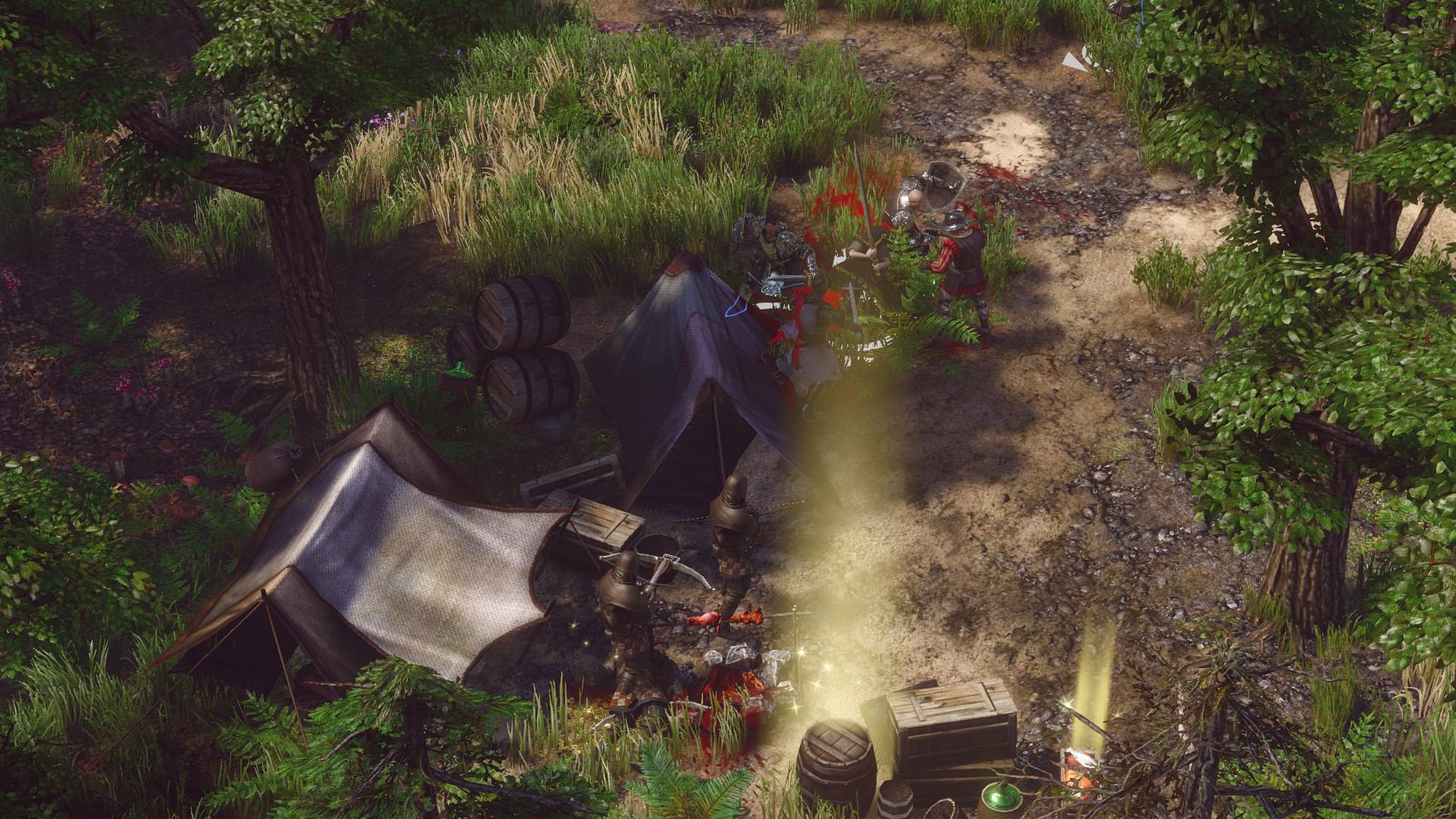 Just like I said. In order to keep the surprise effect alive, I will try not to mention anything important about the main story. But what I have to tell you guys is that it is a decent story with unique lore as well as with many familiar parts. When I was playing the game, I had many flashbacks from many other games. The story is not ‘incredibly original’, to be honest (well, as far as I know). But the lore and the implementation of these familiar features to the game is satisfying. You do feel like walking in a different world with different cultural structures. You do feel the political and social conflicts and feel offended from time to time in your character’s stead. And this is what makes a RPG game successful in my book. You will feel connected to your characters during the main story.

And the RTS part fills the gap between missions. When you go to another location and when you need to get past a village full of hostile elves, you will need an army to help you. And you start playing as a commander of an outpost. Just like in many RTS games, you gather resources, construct buildings, recruit soldiers and destroy the enemy base. This is where it gets interesting because managing your resources, your workers and your army is not as simple as it sounds with my pitifully incompetent sentences.

Base management reminded me of the Cultures and The Settlers franchise where you had to assign workers to specific buildings. Though it is not as complex as it was in these games, in SpellForce 3 you also need to assign workers to specific buildings and you will have to manage your population. After that, you start stabilizing your economy and start building an army. When you are ready, you mix your RPG based heroes with your RTS style army. This is where your characters start playing a distinctive role. 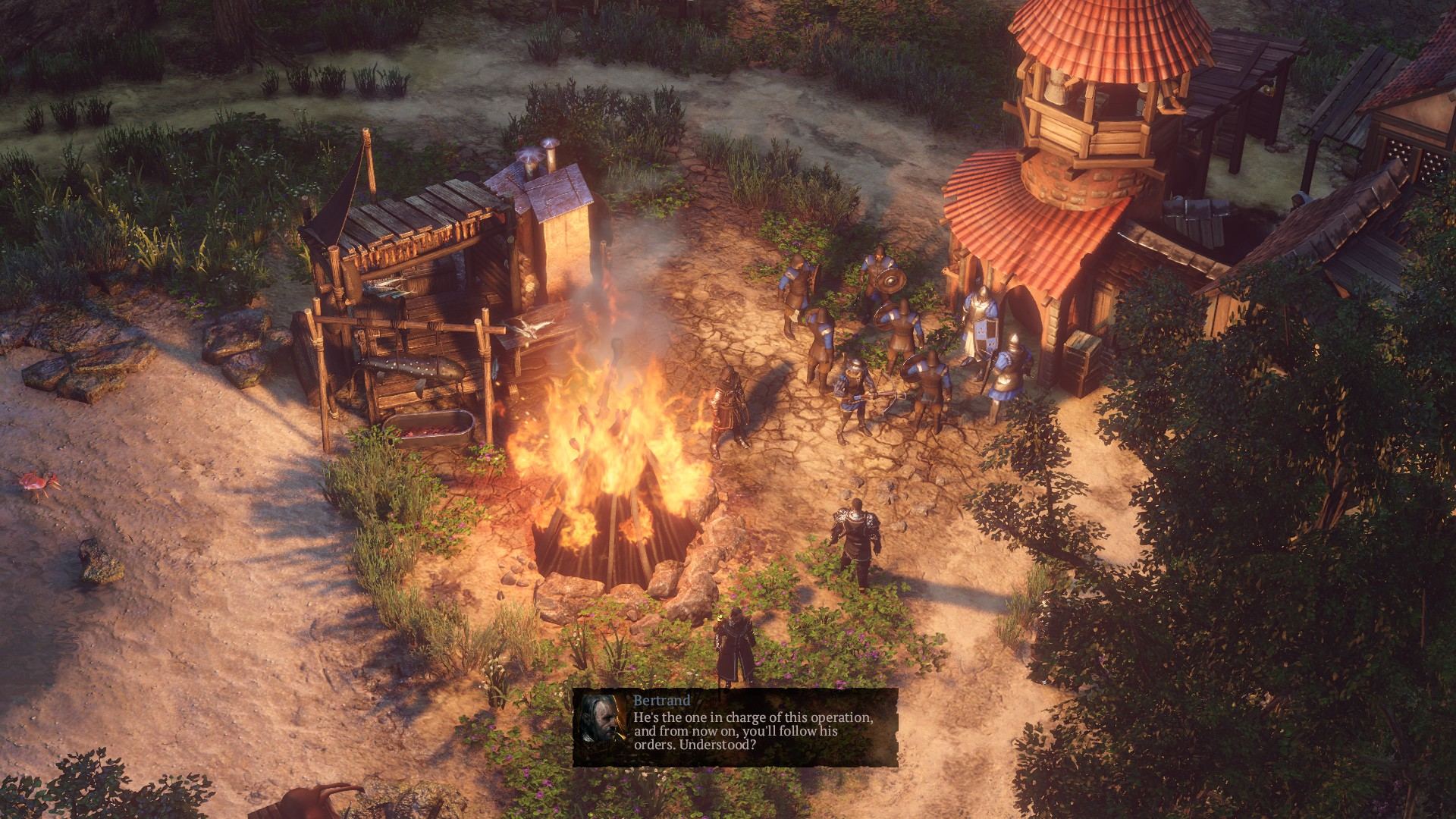 As an RPG game, SpellForce 3 focuses on your main character and the main story. You travel around, finish quests, talk to people and uncover the rest of the story. Each of your heroes have special abilities depending on their chosen class paths. There are 6 different paths in SpellForce 3 and you get to pick three of them. There is no limit to that. You can become a hybrid of a necromancer and a cleric if you want. And of course, if you can keep it together when you start leveling up because you won’t be spending hundreds of points around and get an immortal character. You have to balance your character’s abilities. I tried a two-handed sword wielding necromancer, and I failed because I didn’t pay attention to the skill descriptions.

These main skills have requirements which are your main attributes. For instance, a skill requires your intelligence to be at least 3. The same thing happens when you want to wield a two-handed sword with your necromancer with 1 point on Strength. So be careful when you create your character.

Other than the main characters, their skills and classes, the rest of the RPG elements that are present in the game are pretty satisfying too. The dialogues are all voice-acted and they are really good. In fact, I am sure when you hear the first characters, you’ll start wondering who they are (Hmm… Sentenza Noria’s voice is familiar somehow…) The exploration is quite good for both RTS and RPG games out there. You can both find resources lying around and items for your characters. Grimlore’s effort on creating a living world is impressive. But a couple of minor bugs just get in the way of a full satisfaction. I don’t know how many times I have seen a NPC’s getting stuck and moving weirdly during a conversation. But I should say that the devs keep releasing patches and I am impressed by their quick work. 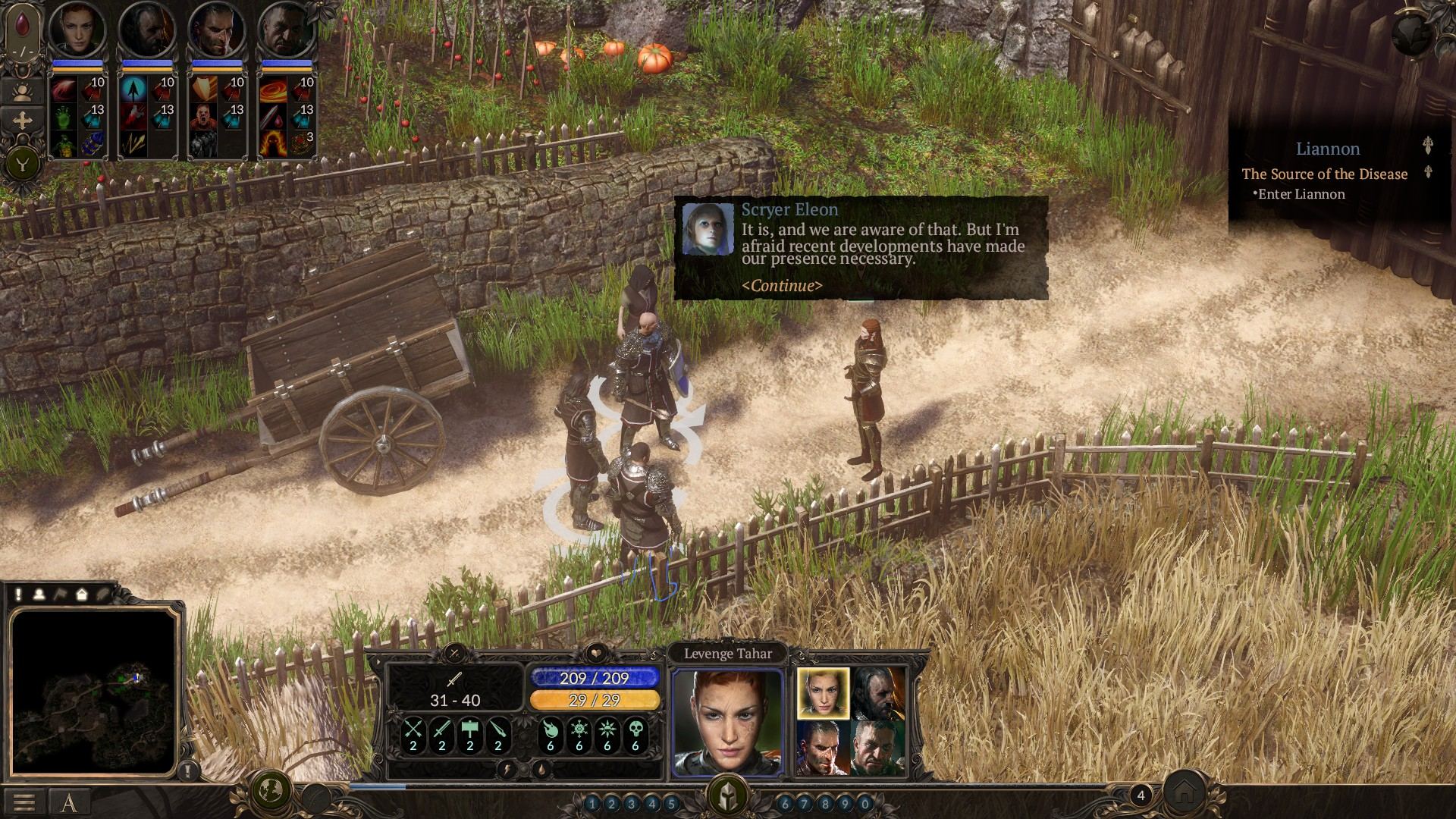 A feast for eyes and ears.

I have already said that. This game looks good. You can easily see it in the screenshots and they look much better when you play it. The animations are simple, and elegant. They do not disturb you at all. Each character does what you expect them to do, nothing less, nothing more. The special effects for skills are pretty good too. The only thing I was concerned about was (again) a couple of glitches when you zoom out in a huge map with big buildings. You might lose your whereabouts and get lost in a dark screen. This happens from time to time and it doesn’t break the game and goes away quickly. But it is annoying, that’s for sure.

The music can get a little repetitive from time to time but it is good. Overall, I can say that the game offers a good technical composition of visuals and sounds. When it comes to the controls and the UI, I can say the same. There is nothing annoying in that regard. And you get used to the mechanics pretty quick. 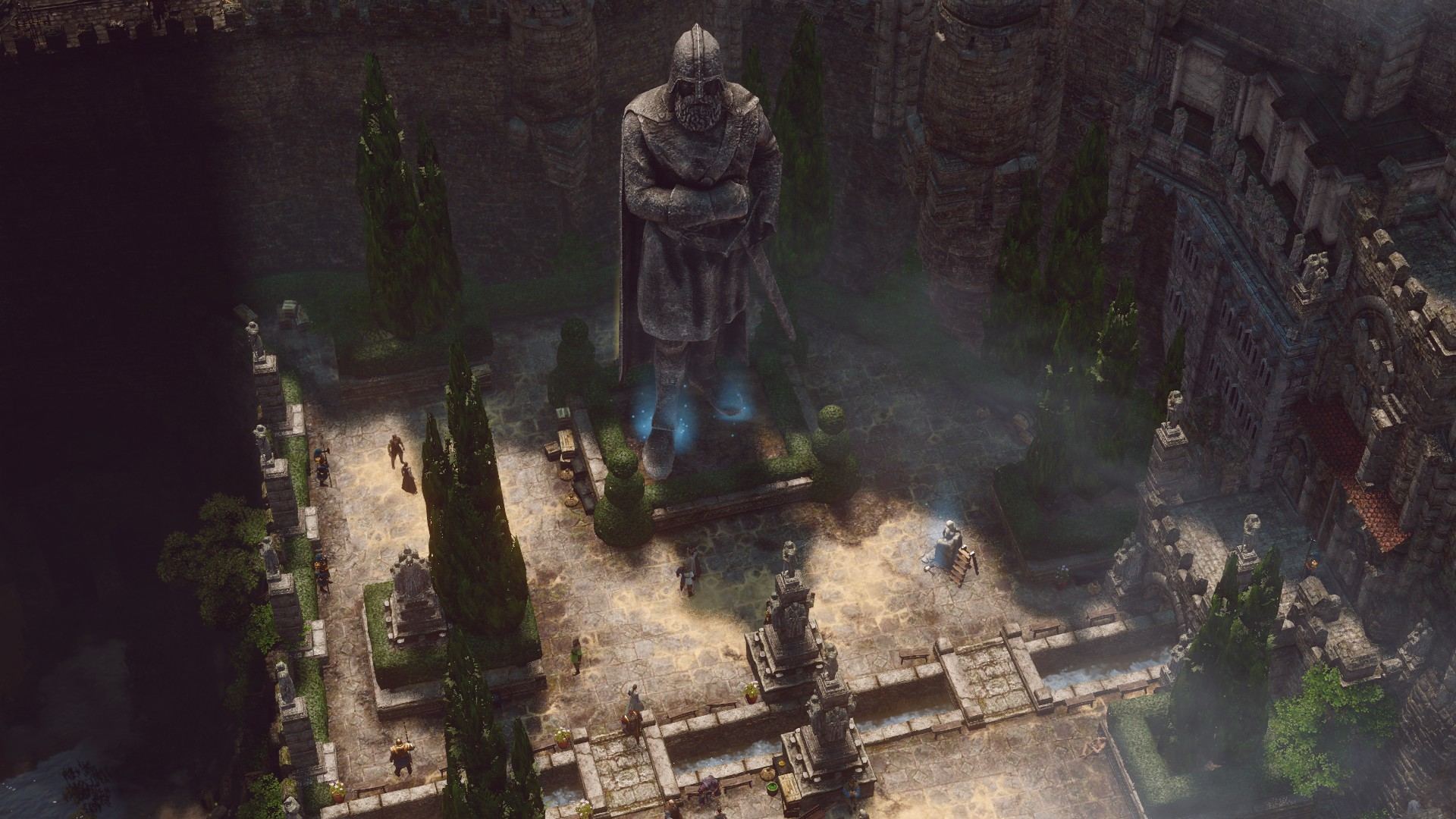 Here comes the “But!”

Even though I was impressed with many features of SpellForce 3, there are a couple of issues that I found to be a little dissatisfying. Huge maps with huge cities and buildings look pretty awesome. But the problem is, after some time, they feel empty. Interactive NPCs are too little in numbers. There are maybe a couple of NPCs with whom you can speak and get information. This part kills the RPG aspect of the game. Although it is not a huge disappointment, it does makes you feel bored from time to time.

NPCs that walk around in a city, or in a camp look exactly the same most of the time. The unique feeling of a living world doesn’t exist in these parts. But when you set the RPG part aside, and focus on the RTS part by joining the Multiplayer feature, you start enjoying the game in a different way. This gives you the opportunity to enjoy the game even when you are bored with the RPG aspect of it. And that gives the game an unlimited time of re-playability. However, as a RPG focused game, RTS part might feel a little weak for some players.

But no matter what, both RPG and RTS fans will find something interesting in this game and enjoy themselves for weeks or maybe for months. This is why I think SpellForce 3 is a good and fun game. And with good visuals and sound effects, it is a game that offers hours of fun gameplay.

SpellForce 3 is available on Steam, Humble Bundle and GOG.

SpellForce 3 was reviewed using the Steam key provided by the publisher.

SpellForce 3 offers a unique and well balanced mixture of both RPG and RTS elements. With good visuals and sounds, it is also satisfying to see and hear. It is possible to see a couple of bugs from time to time but the game is getting constant updates and it is getting better and better each day. Those who love RPG and RTS games should absolutely try this game. However, if you are too concerned about little details and bugs, you might want to wait a little bit more. But recommend playing this game when you have the chance.