Strategy games have improved themselves drastically during the last decade. Real-time strategy or turn-based strategy games have been introducing new ways of controlling the units and a new approach to tactical combat. From X-Com series to Civilization franchise, it is possible to see a vast variety of tactical-combat mechanics. While some of them focuses on a turn-based approach, many others also present a real-time combat system. But each of them offer a unique taste. In that regard, Ancient Frontier is a good mixture of the many other well known turn-based strategy games like X-Com. And to be honest, just like I will try to explain shortly, the developers did a good job about finding a balance.

Ancient Frontier is a turn-based strategy RPG set in the far future. You command the fleet. Players will explore, conquer, pillage, or liberate the frontiers of space. Take control of massive fleets of capital ships and support craft as you play through multiple campaigns.

This quotation should be enough to summarize the game. Basically, what we should expect is a turn-based strategy game which takes place in a unique sci-fi world with many unique characters. But what stands out among all the others is the fact that this game, though it is an indie game, is a well-polished, well-balanced game with a unique tactical approach. So, without further ado, I happily present you the details about Ancient Frontier. 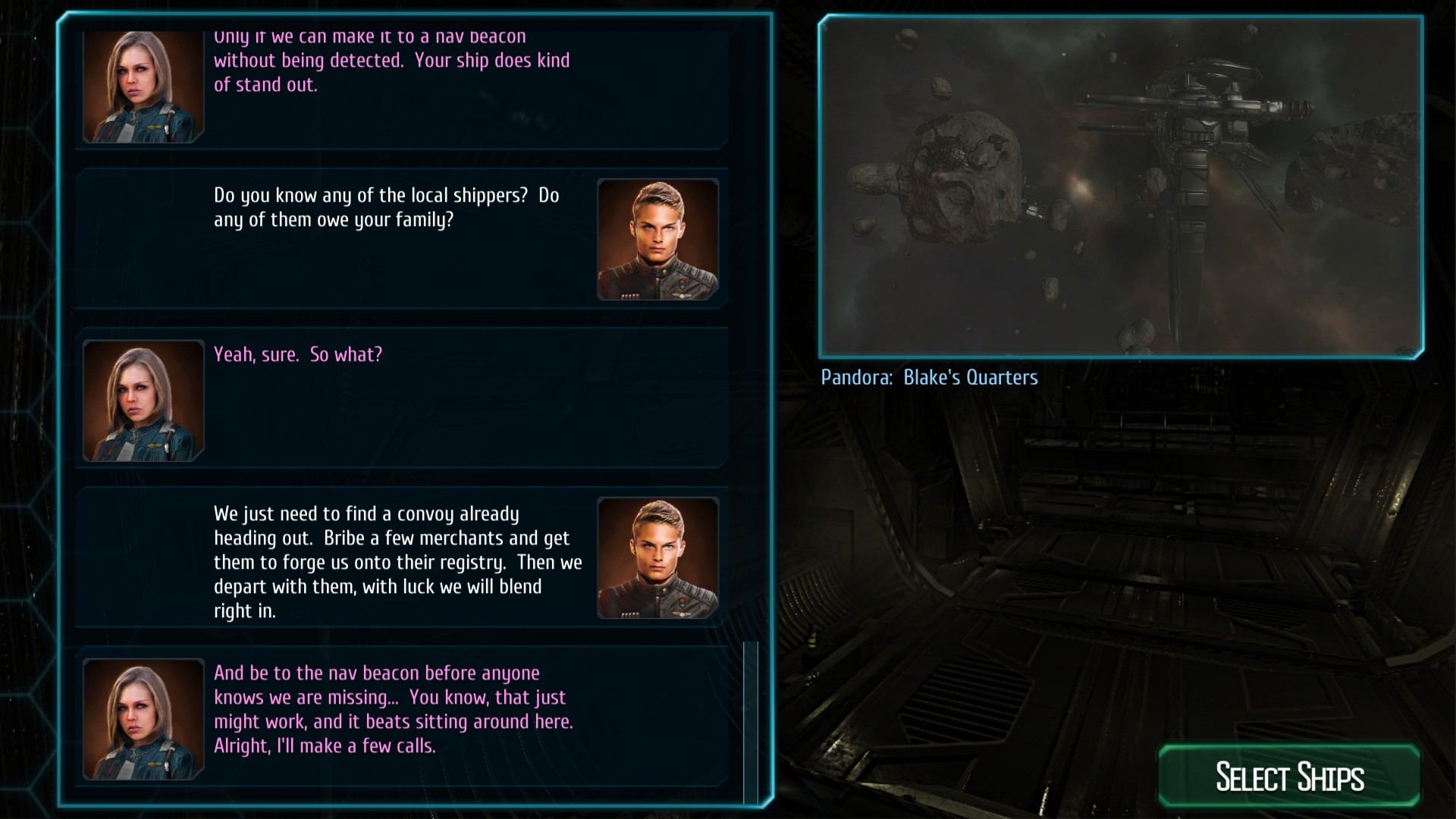 The story evolves around one simple and familiar base: The human race was about to extinct at some point. The Technocrats, who were the main mind behind the technological developments, saved the Humanity of this fate. The first colony was found on Mars and from there, humans started to gain their former glory. Interstellar travels became possible and from that moment, humans started to conquer other stars and planets. As the population grew bigger and bigger, The Federation, which is the first playable faction in the game, started fearing that a civil-war was imminent. In order to prevent this, they built a huge fleet called The Human Federation Star Force.

At some point, the colonies grew bigger and bigger. They wanted independence and this started a civil war. Here comes the second playable faction, The Alliance. The war between the Alliance and the Federation was brutal. And eventually, the Federation was victorious. After that point, the game starts and you chose between those two factions. And most of the time you fight against the pirates.

The story is short and kind of unique if you ask me. Yes, there are plenty of familiar points with many other games or stories, but the implementation of the story to the game is pretty good. 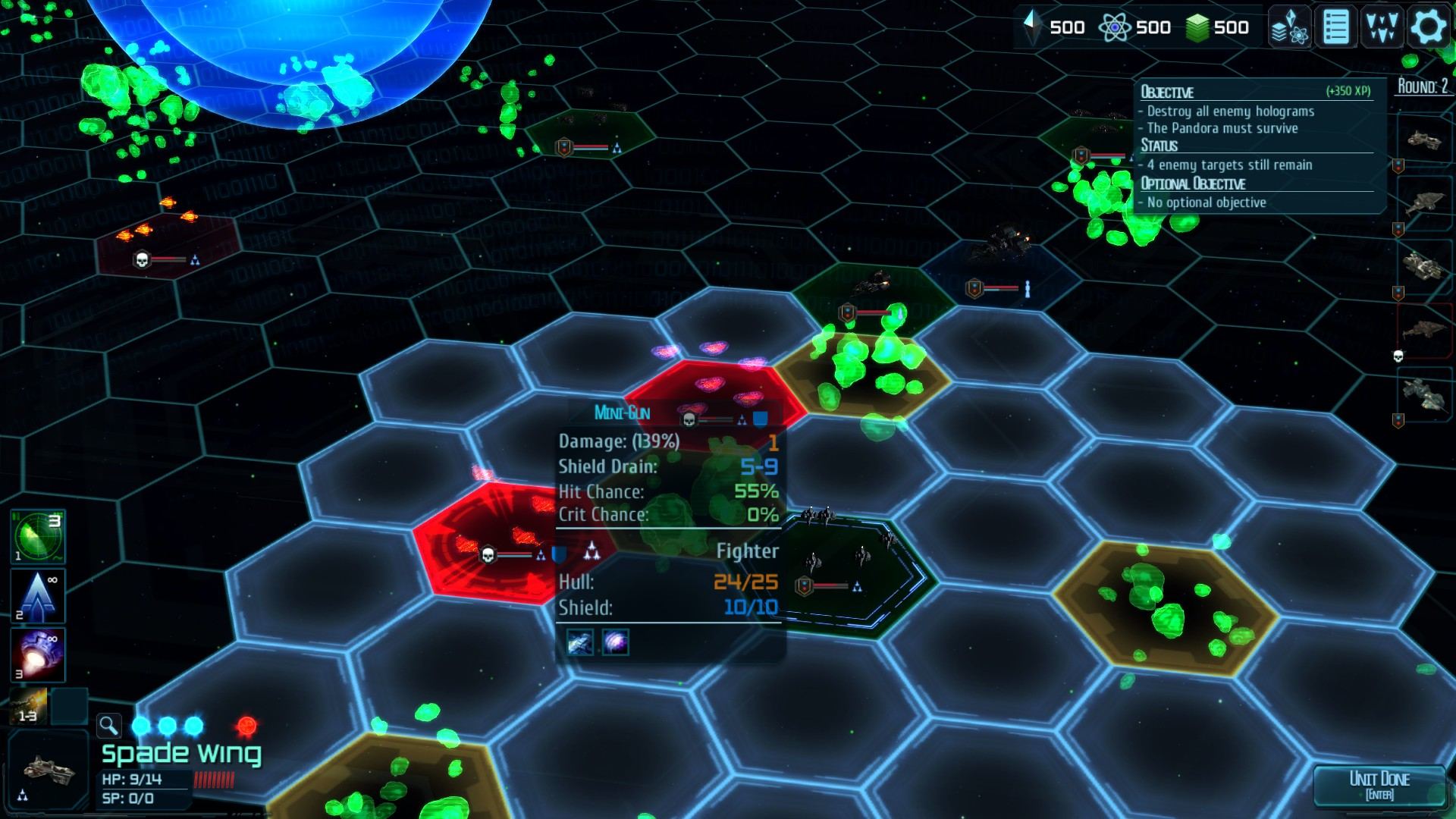 When you chose a faction, you start the game with a dialogue where the voice acting is ‘meh’. It is not bad, but it also doesn’t sound natural if you ask me. But this is not an issue as the dialogues are not that common and you can just skip them if you want. The best part about this dialogues is the fact that from time to time you can chose what to do and it effects the actual gameplay.

So what is the main mechanic of this game? It is a mixture of X-Com and many other classic turn-based RPG games like Baldur’s Gate and Icewind Dale. You create a fleet with different kinds of ships. Each mission you accept requires a different fleet composition. Sometimes you will need fast ships to quickly gather resources or reach to the mission point, whereas sometimes you will need strong and slow ships to be able to hunt down your enemies. This feature adds the game a really good tactical approach. You cannot expect to create a fleet and use the same types of ships all the time. And the main missions will require you to take care of other civilian or unique ships.

The map is full of grids which are reached by spending movement points. You get more movement points for your faster ships like Explorers. Other than the movement points, you also have action points which are used for attacking or special moves like recharging the shields, forcing the thrusters to be able to go further on the map or to use your special weapons. 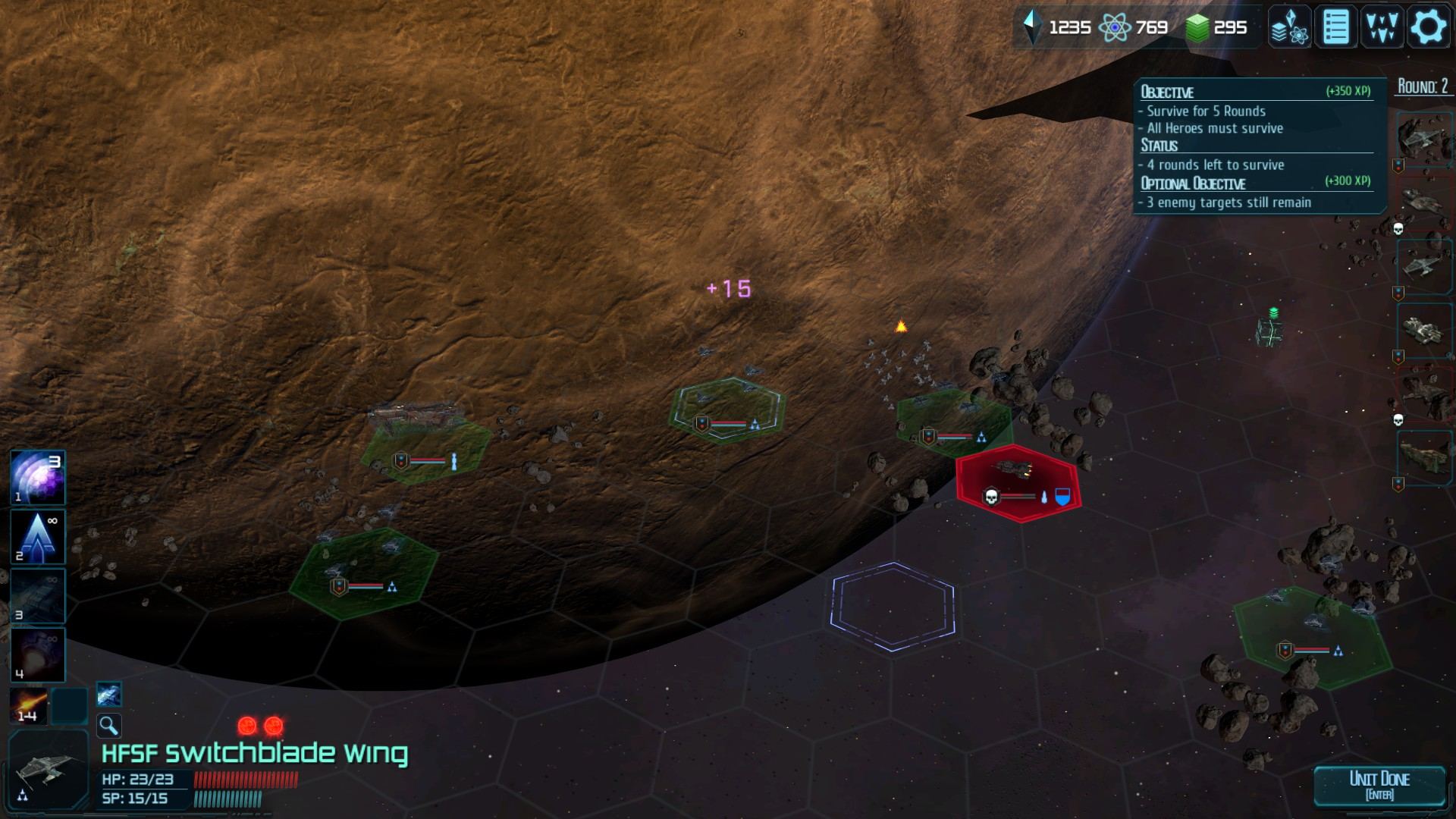 On the map, you can see asteroid clusters that you can use as covers just like in X-Com games. It is crucial for you to plan where to put your ships as when they are destroyed, they don’t come back. However, it really doesn’t feel that this feature has a huge impact on the gamepley. Even if you don’t use any cover, you will be fine. It is not the same thing for higher difficulties of course. But I wish it had more impact on the gameplay like it did in X-Com.

If you have ever played the Ironman – Impossible difficulty on X-Com games you know what I’m talking about. The same option is available in Ancient Frontier. If you like challenging games, you can just activate the option. Once it is activated, you will have only one save slot and you won’t be able to roll back when you lose a ship. You get punished severely for your mistakes.

This feature is a healthy way to force people to take time before act. However, there is one big problem about this feature and the gameplay in general: You cannot chose whichever ship you control. The game decides which ship to go first and which to go last. You can upgrade the initiative of your ships but it doesn’t effect the randomness of the game. In X-Com, you can use every single soldier you have and that made the game challenging and fun to play at the same time. If you make a mistake, you get punished just because of your fault. In Ancient Frontier, it is kind of RNG based. It worked pretty good in Baldur’s Gate for example, but it doesn’t in this one. 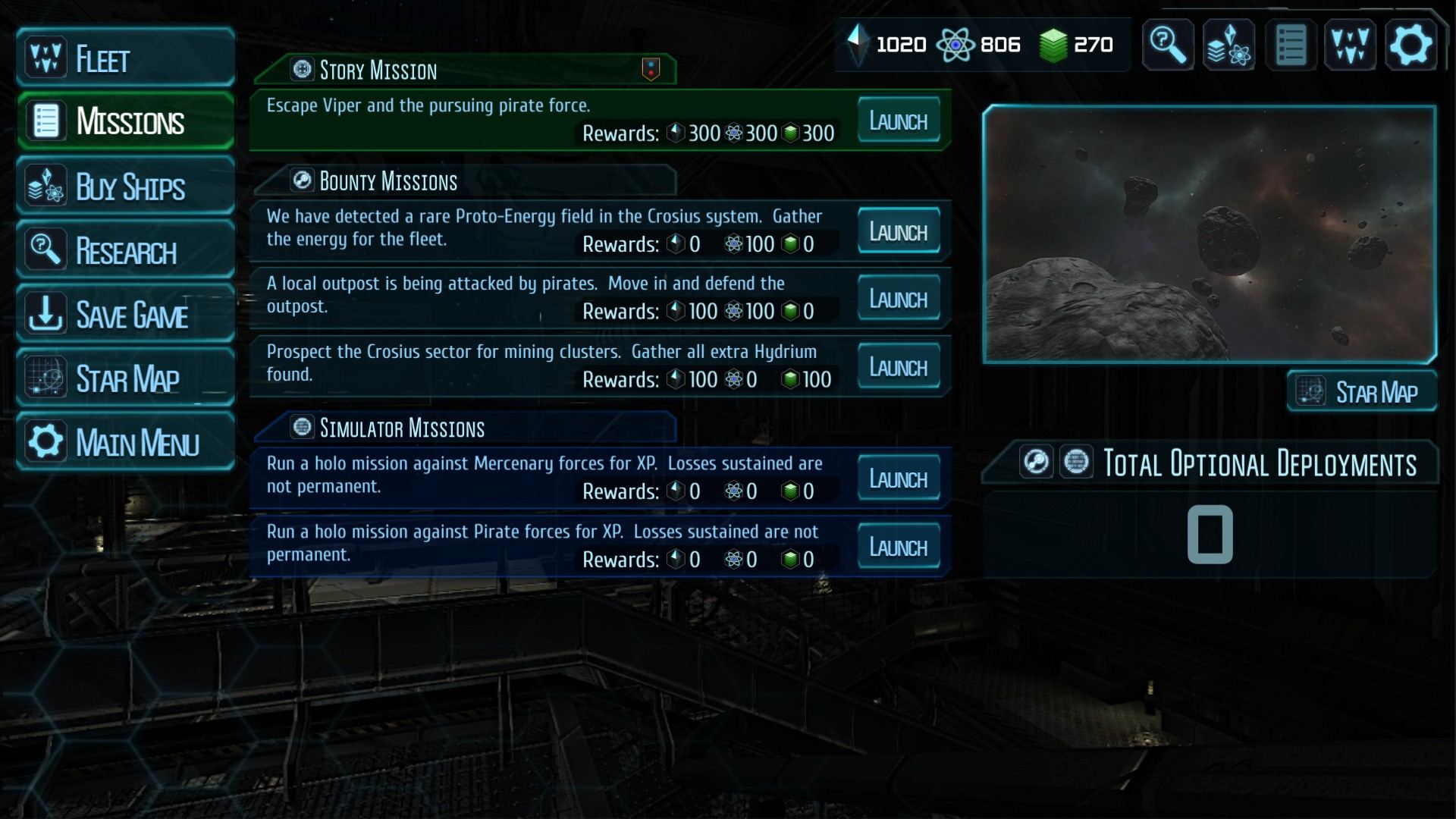 There are three kinds of mission that you can choose: the main story, side missions and the simulation missions that you can use to improve your ships and let them level up quickly. But be warned, they are pretty hard. The main story (at least so far) is pretty simple and good. It is not that captivating but this is not a huge problem as the main feature of the game is being a strategy game instead of being a story rich RPG game. But it doesn’t mean that the story is bad, it is good. It is just like X-Com’s story if you ask me. It adds a flavor, but you don’t play it for it.

With each main story you complete, you get new unique ships which you can use in other missions. Side missions are pretty good also. There are different kinds of missions like gathering resources, rescuing ships, destroying pirates or exploring. For each of these mission, you will have to form a fleet with ships that you can use to finish the job. Try to get your biggest and strongest ships if you are asked to destroy enemy ships for example. Or bring your explorer ship with you if you want to finish an exploration quickly.

For each mission you complete, you get resources, ships and items that you can use on your ships to improve their abilities. And after your ships level up, you can upgrade them with your resources to be more efficient. The tech tree for each kind of ship is pretty simple to understand. There not many choices if you ask me. But you also don’t need a huge tech-tree with tons of options either.

As for the music and the visuals of the game, I can easily say that I was impressed. Fair Weather Studios did a great job about the music, sound effects and the visuals. As a strategy game, I can say that the visuals are satisfying. After building a huge fleet with the best ships you have, and after you start having huge battles with other fleets, you can easily feel like you’re playing a well polished game. The only problem that I can mention could be the fast movement animations and slow attack animations. They can be a little annoying from time to time. But hey, it is nothing compared to what you get right?

The music is fantastic. It suits the game really well. Even the main menu music gets you into a sci-fi fantasy world. And the fact that it is a little creepy makes me feel more and more satisfied about the sounds of this game. The voice acting is good, but not the best. Other than that, this game offers good visuals and sounds. 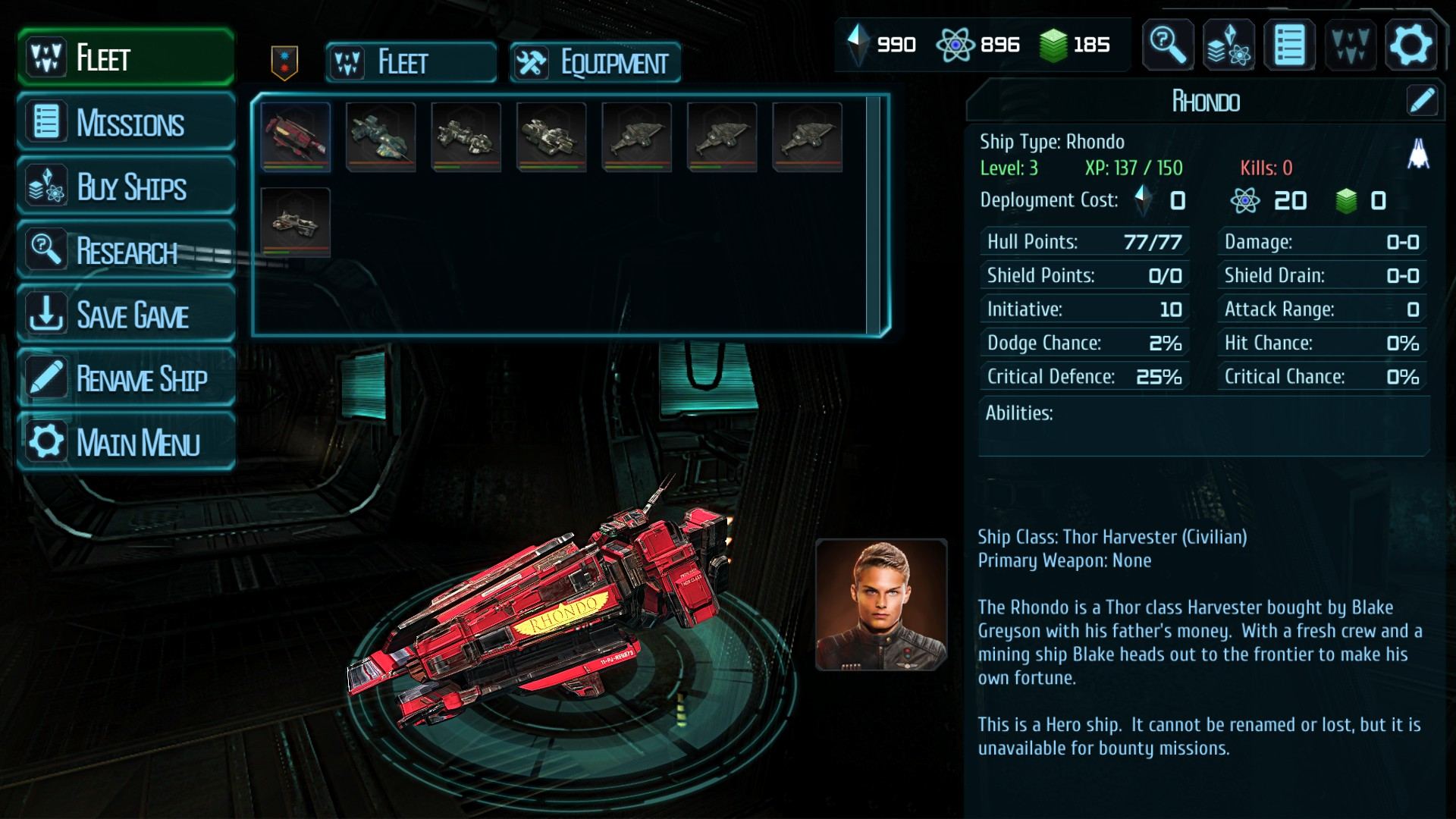 Ancient Frontier is a pretty good game with many unique and familiar features. The mixture of these features create a good turn-based combat system and it makes you get lost in the game for hours. After playing more than 20 hours, I can easily say that it made me feel satisfied. There are a couple of minor issues like sound being muted at some parts of a dialogue. But I haven’t seen any game breaking bugs so far. So, If you are a fan of turn-based strategy games with a unique story, good music and good visuals, this can be a good choice.

It is not the most unique game on the market. It will sometimes make you feel like playing a game that you have played before. But considering the fact that the game is currently $25 on Steam I can easily say that it pays it back in a couple of days with enjoyment. But if you like fast paced action games or rich story driven RPG games, you might guess what I would say to you…

Ancient Frontier was reviewed using the Steam key provided by the publisher.

For turn-based strategy lovers, Ancient Frontier is a jewel. Even though it has a couple of flaws about the story and originality, the offers a fun experience with many well known features. However, if you are not a huge fan of slow, turn-based combat, you might want to look at something else. Otherwise, I recommend you to try it.

We May Get a Next-Gen Version of ‘The Getaway’