A Bloody Night is a horizontal fast action 2D game where we kill and kill, and finally kill more. Before any personal opinions, I would like to make it clear that this is a revenge story where every living thing is our enemy and every moving thing is just an obstacle standing in our way.

Once, The Greyplain region was a quiet and safe place. Until one day, our sister Asteria who is running the family inn for years, starts screaming in the middle of the night. She was murdered in cold blood by a group of strangers. As his older brother and a skilled warrior, we commit our life to revenge her.

The game offers a decent background story and you can’t help but enjoy every killing since the revenge is so satisfying. The innocent blood of our sister was not spilled for nothing and every soul who has tortured her must be punished by our sword. And with this thoughts in our head, we start our journey. 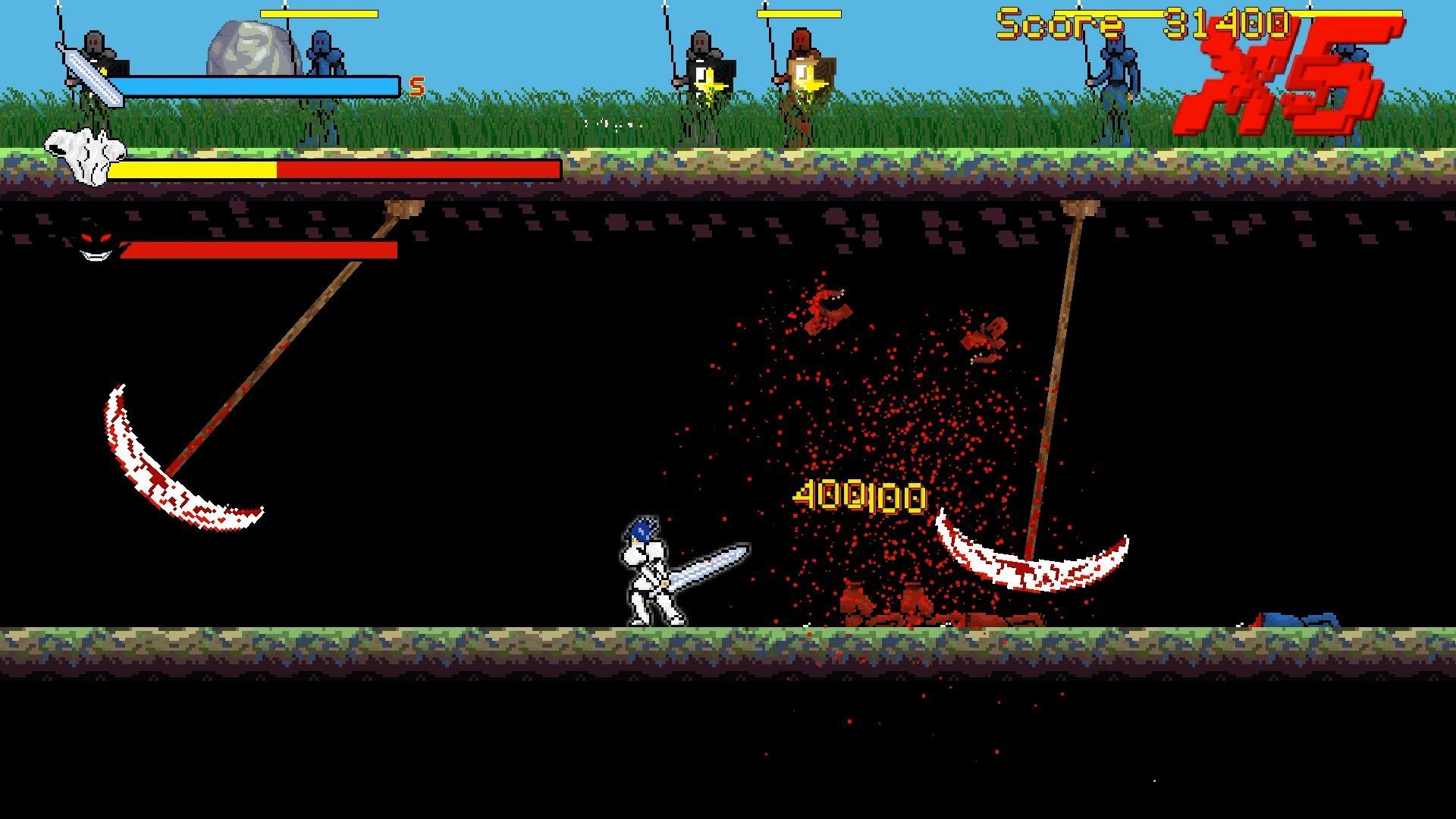 Like Hansel & Gretel left breadcrumbs behind, we leave dead bodies. These dead bodies once were our enemies, just some obstacles in our way. Our main goal is to reach the center of the Empire and find out who ordered to kill our sister and why.

Also, you will encounter shielded and heavy shielded soldiers along your way. These are also can’t escape from your fury and will be smashed to the ground like any others. Yet, archers are some skilled enemies since they are fast and have long ranged weapons. Giants, Titans and Executioners on the other hand, act like bosses and will take a long time to kill. When it comes to Myrmillarius, Myrmillarius Gold, Auxentios and The King, you better brace yourselves.

Until you encounter with a boss, I can say that the game offers a face paced action which is fun and exciting. Killing an enemy is not that hard, but you may find yourself doing stupid things and it is a common thing when the game is fast paced, I suppose. 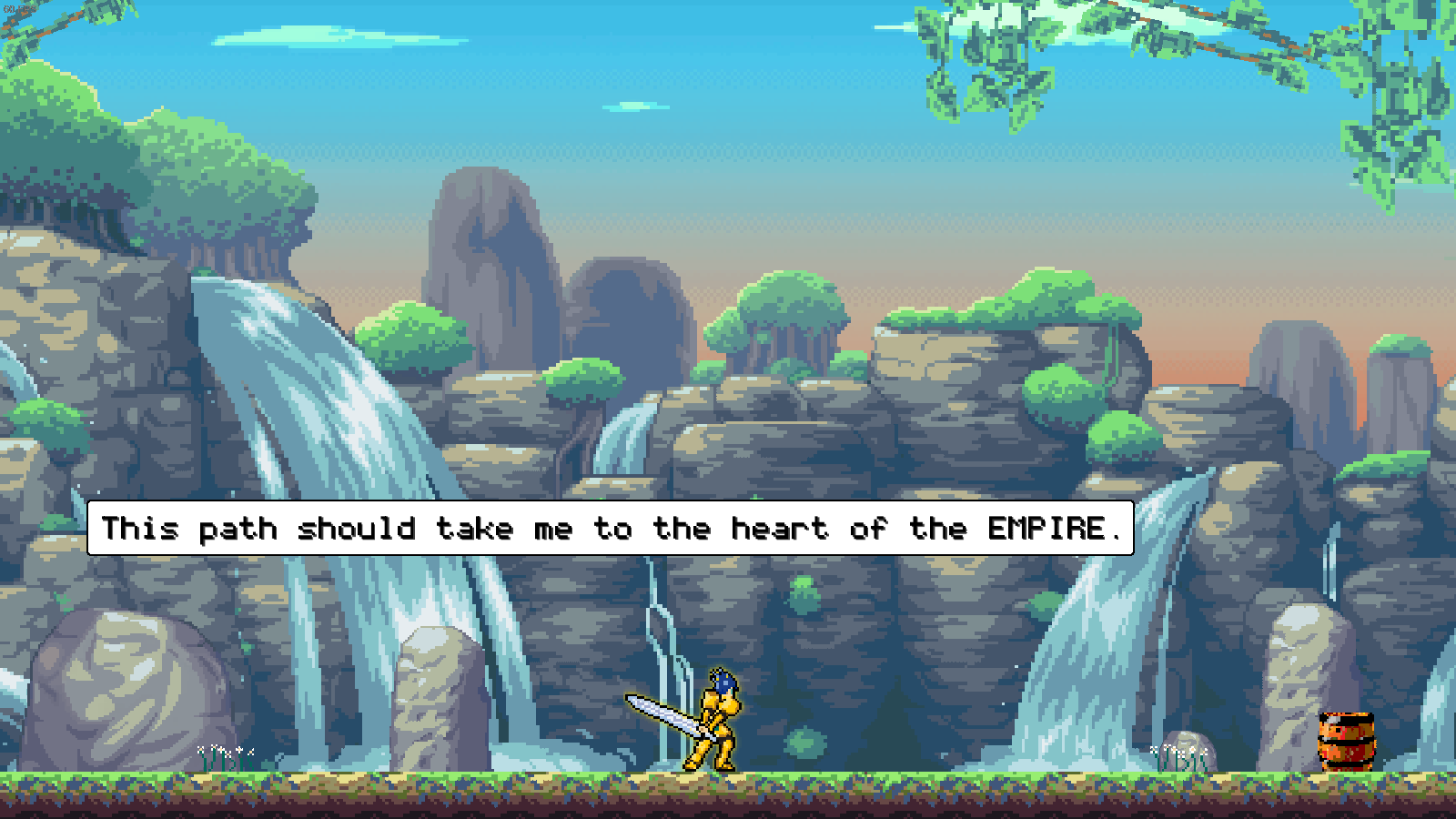 During the gameplay, we can only wield one huge sword yet our actions are many. We are able to perform three normal attacks while there is always an option to perform a strong attack or a jump attack.

Certain types of enemies can be killed with handle attack which is simply works like hitting their helmet again and again until we turn their head into jelly. Face kick and charge are always amongst the options.

I can easily say that fighting is extremely enjoyable. For a pixelated game, animations are really satisfying, specially when blood erupts. When it comes to big enemies, you must change tactics since until there, you will easily run and kill. Hit and run seems like a better option for stronger enemies, if you ask my opinion.

Tis but a scratch!

On the screen, you can see your Sword Energy, Armor Energy, Score and Enemies (as a number). I must admit that your armor is not that tough and you can be killed easily. Yet, with only pressing a key, you will start from the beginning of the level. Levels are short, thus it won’t be a problem if you die a lot. During the gameplay, you can improve your sword and shield, also.

Along your way, you will encounter smartly placed traps and if you are skilled enough, you can use them on your enemies. Cannons, logs, spears, boulders and explosives may be deadly for you, but they are also deadly for the soldiers. I know that this game rushes you and you feel like you need to run and kill every living thing. Yet, if you can spare a second and look for traps, they will be your advantage and the death of your enemy.

A bloody massacre with a charming background. 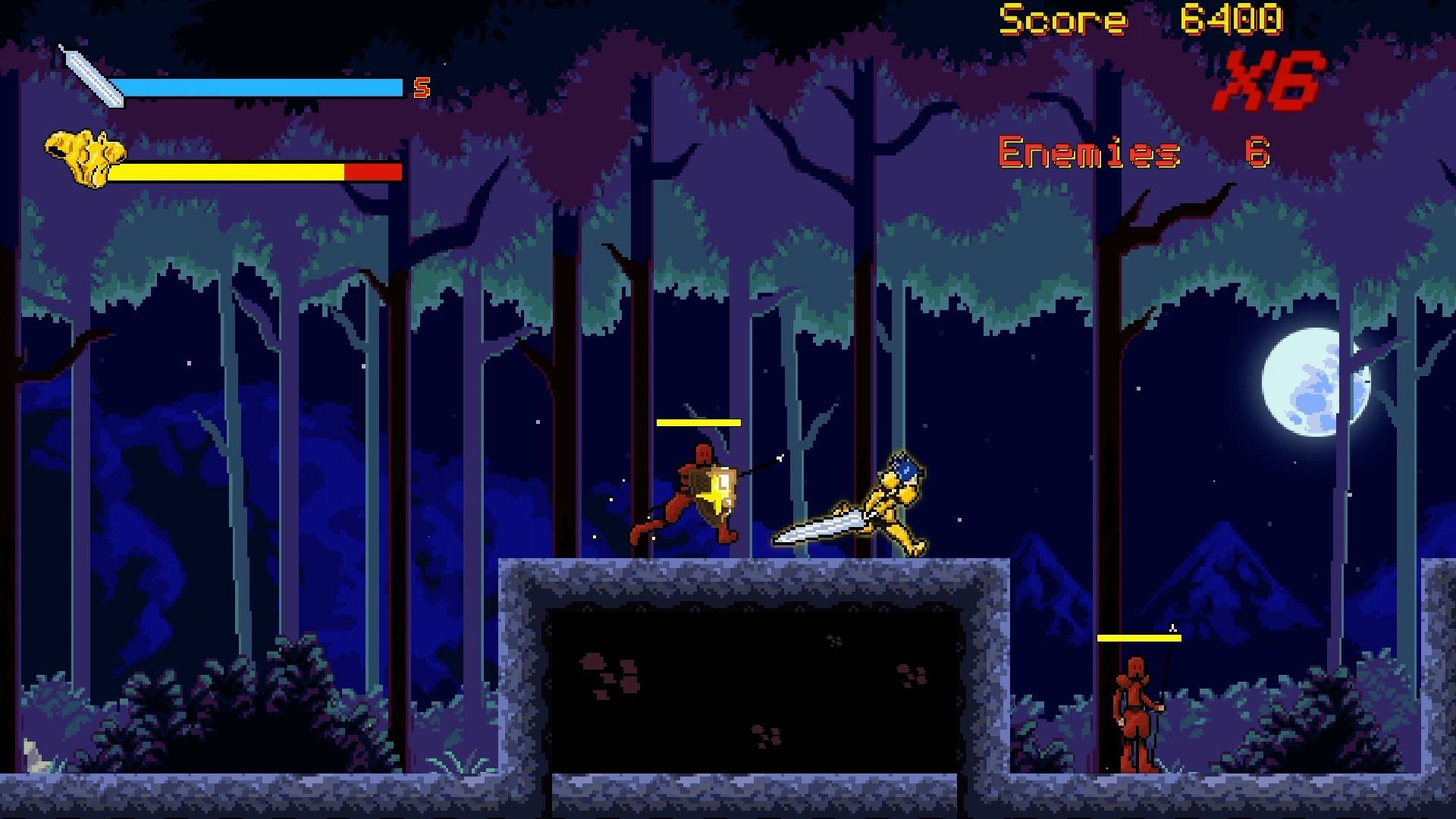 When it comes to the pleasure for our eyes and ears aside from our inner savage, A Bloody Night offers a beautifully crafted environment with splendid soundtracks.

The map is simple enough and divided into zones such as desert, plain and mountains. After you beat the levels on it, you can skip to the next zone which surprisingly offers various charming levels.

The background and the music always in a harmony with gameplay. Detailed pixelated artwork will capture your heart in a minute. Enemies could use a little bit more detailed work, but I think it won’t disturb you much.

While cutting and smashing your enemies, you can also cut various objects around you like trees, rocks and towers which is a nice touch to the game. And, you must cut some objects in order to move on. I like the idea which lets us interact with the world of the game and it is one of the parts which inspired me to go on.

As you move on, your task will get heavier yet more and more beautiful levels will welcome you. When your screen swarms with enemies, the thrill will fill you in. When it looks impossible, the revenge will keep you up. When you are tired of being killed, your enemies’ fresh blood will encourage you.

Customize your key bindings? How about no?

Well, here is something to criticise about A Bloody Night. With no doubt, I can say that the menu is sufficient enough for a game like this. Above all, A Bloody Night is a tribute to simplicity. Yet, I wish I had an option to change key bindings.

The game lets you use a controller, on the contrary I always choose keyboard and mouse and I think every game should let you customize your key bindings. A Bloody Night does not have that option and because of this, I died a lot. Is it something which can be improved? Yes. Is this a game-breaker? No. Just the same, you can enjoy A Bloody Night after the adaptation period.

Behind all this work, there is only one name. Emanuele Leoncilli is the solo creator of this simple but charming artwork. If you like what you saw and read, you can take a look at A Bloody Night’s Steam page by visiting here.

A Bloody Night was reviewed using a Steam key provided by the publisher.

When your screen swarms with enemies, the thrill will fill you in. When it looks impossible, the revenge will keep you up. When you are tired of being killed, your enemies' fresh blood will encourage you. With a restless gameplay, A Bloody Night offers a chance to revenge your loved ones. Don't hesitate for a bloody night is promised and it shall be.