“In a galaxy far far away…”

The possible existence of the extraterrestrial life has always been a good subject for any genre. Especially, if we are talking about the artistic world, this futuristic fantasy genre lets many artists to create many novels, movies and of course video games. So what is this about? Why am i talking about obvious stuff? Well, I don’t really know. The only thing I know though is the fact that I had so much fun playing this game. And this game takes you to a universe with many unique characters and mechanics. As you will see soon, it succeeds in taking you to another world. Halcyon 6: Lightspeed Edition offers a unique space sim experience with many good features.

First of all, what I want to emphasize is the fact that Halcyon 6 has a unique story. The world, the characters, enemies and allies has unique characteristics. Starting from the very beginning, you delve into a world which has many mysteries. Maybe not that much. But it is sure that it takes you to another dimension. I will try to make it as simple as possible. Because for an indie game, this one carries a lot in its baggage.

Before anything else, I would like to admit that I didn’t have the chance to test the game on higher difficulties. On normal difficulty, I had few problems about managing my resources, my fleets etc. But I am pretty sure it changes when you play on higher difficulties. Also, this game is an old-school game with older graphics and sound effects. So, take this fact into consideration before deciding. So, without further ado, let’s look at the details about this game shall we? Especially before I start praising it without any reason. 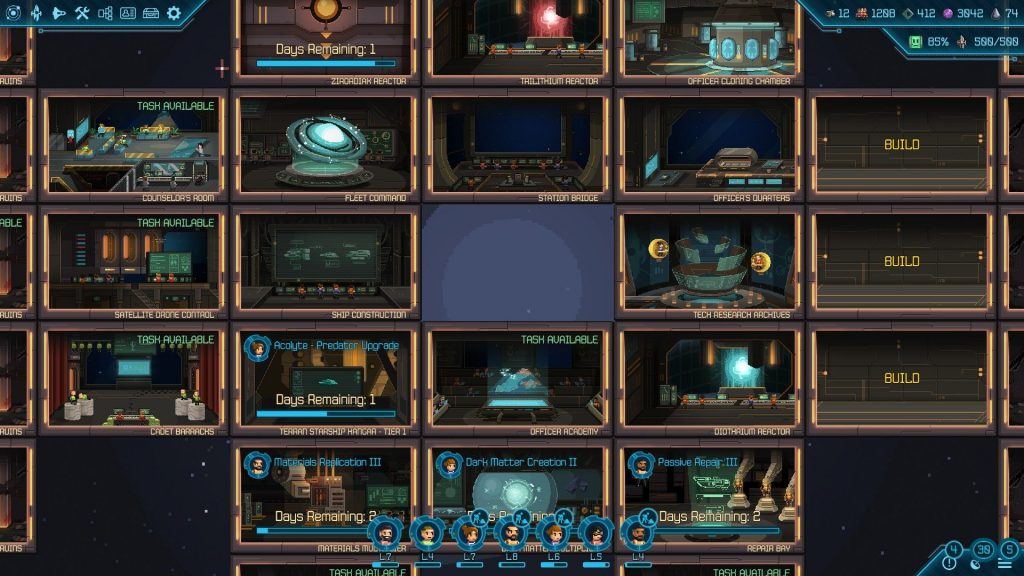 First of all, I’d like to point out the main features of Halcyon 6. It offers a beautiful mixture of RPG, action, base management and a space simulation. The first time you start the game, after a long and very informative tutorial, you find yourself in a world where the possibilities are many. You start with a base with basic needs. And you suddenly realize that there is much to do before you can start enjoying the actual game.

You start with training officers which are crucial for your story. Every single officer has a different profession, thus different skills and tactics to use during combat or during base management objectives. You assign these officers to your ships and with these ships, you build your fleet to explore the galaxy. The officers level up as you put them on charge of base management or colonial operations. These operations, along with space or ground combats, will give XP. As your officers level up, they get stronger about both ground and space fights.

Other than that, you have to manage your base by collecting resources. At this point, it may sound a little repetitive. And I’ll be honest, it is kind of repetitive especially after you figure out that your basic needs are not that many. You start building your base – which is almost the same with X-Com or Fallout Shelter style base management. And if you ask me, even though it is not the best, it’s pretty sufficient for a game like this. The base management is not too complicated and also it is not “complicated enough” to become a real challenge.

The best thing about your base is that you encounter many random events during your management. Depending on your choice, you get a different outcome. Sometimes you get rewards, sometimes you lose something. But in any case, it is good to feel like having a living base. 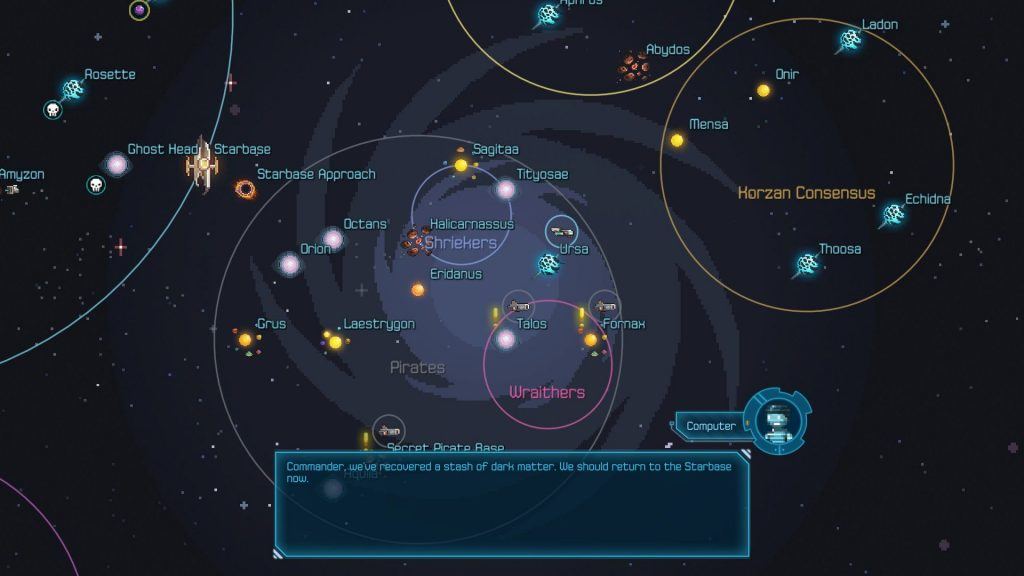 Base Management And More

The base management system requires you to collect necessary resources for you to expand your base, to upgrade your fleet(s) and your officers. To do that, you need resources like crew members (which are basically people who live in your base), materials and dark matter. To be able to get enough resources for your base, you will have to expand your borders, if there’s any at all… What I mean is that you need to colonize planets, debris fields etc. You can build mines and colonies in order to collect them. And of course, you will have to protect them.

The interesting part about this management system is that you will need the necessary officer skills to be able to build or upgrade a specific mine. You need engineering for Material mines for example. Or you need science to be able to process the dark matter. The more skillful your officer is on the respected field, the faster your operation will be finished. So putting a scientist on a material mine construction duty is not a good idea as it could take more than 10 days.

Apart from the economy, every single upgrade for your base requires the same skills. You can always see what is needed for an operation to be completed by checking the colorful bars on the bottom of the upgrade/build/research screen. Even though this system is enjoyable most of the time, sometimes it can get too repetitive and you can find yourself overwhelmed by the resource gathering mechanics. But after you stabilize your economy, you start focusing on the exploration and combat aspects of the game. 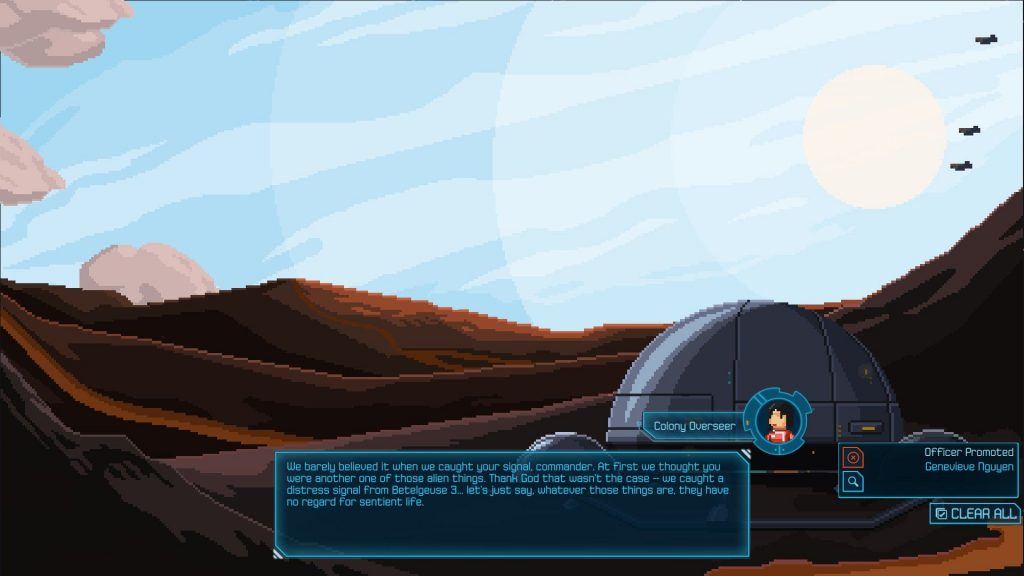 Story wise, Halcyon 6 offers a unique world. The races you meet, the space pirates and the alien race have their own stories and characteristics. Little hints about these races makes you feel like playing a lore based game. You want to know more, but unfortunately, you don’t have many choices other than talking with their representatives. At this point, I can easily say that It could have been a much better game with more lore based elements. Even  having a couple of digital entries found around the universe which explain the background of them would be enough.

As for combat system, which is a the Final Fantasy style turn-based system, is pretty fun and interactive. Basically, you have two kinds of combat situations: space combat – with your fleet(s) – and the ground combat – with your officers. Each one of them requires different tactics and you will use different skills. The “exploit” mechanic forces you to take a tactical approach on every single combat. You can, for example, use a skill which exploits the sensors offline effect, and deal much more damage. Different combat locations have different effects. And you have to adapt your tactics according to them.

About the visuals and the sounds, I can say that this game wouldn’t satisfy everybody. As you can see on the screenshots, this is a classic old looking game with pixaled graphics. Which is not a problem if you ask me. After you see the battle animations, you feel satisfied, believe me. But if you’re looking for a visually stunning game, this is not your game.

Sound effects are also just like the graphics. The music and the sound effects remind you of your childhood. They are not disturbing, but they are not the best. Basically, this is an old-school game with old-school visuals and sounds. If I have to be honest, I could easily say that these features have never disturbed me while playing Halcyon 6. It all depends on your taste.

However, I would also like to add that I encountered a couple of graphic bugs and sometimes, especially when you’re managing your base, different musics play at the same time and it can be a little disturbing. Other than that, both the visuals and the sounds were pretty good for a game like Halcyon 6.

Overall, Halcyon 6 is a fun and interesting game. It has its flaws of course. Mainly, I think more lore based elements would make this game a much better one. The old-school graphics and sound effects are pretty satisfying if you are into it. Also, the micro-management mechanics with RPG, action elements offers an interesting experience.

So, I would recommend trying it without a second thought provided that you enjoy playing old-school games. Be assured that you will feel satisfied with the mechanics of this game. And you will see that you like playing the RPG-action based micro-management supported space sim Halcyon 6: Lightspeed Edition.

Halcyon 6: Lightspeed Edition was reviewed using a Steam key provided by the publisher.

Halcyon 6: Lightspeed Edition is an interesting game with a unique lore. As a space simulation with a fun and interactive combat system, RPG based elements and micro-management, it succeeds on providing a satisfying experience. Although it has a couple of flaws, old-school game lovers will surely enjoy playing Halcyon 6. However, if you're looking for up-to-date graphics and sound, you should think twice about giving this game a chance.