Walden, a game is a first person life simulator/survival game developed by USC Games in which you put yourself in shoes of a 19th century American philosopher, Henry David Thoreau. The writer who is the protagonist of the game is well known for his works as an article called Civil Disobedience and his masterpiece on which this game is based, Walden.

Before anything else, I should warn you guys that this is not a common survival or simulation game. This is something different. This game, if I may summarize it, lets you experience the beautifully balanced, peaceful atmosphere of the nature. Instead of making you worry about “surviving”, it makes you feel harmonized with the nature and blend yourself into its beauties.

What we should know about Thoreau is that he was an intellectual who questioned the society, its laws and the development of the social structure which he considered as a barrier between men and its potential. That is why he wanted to discover the boundaries of human as a social being in nature, and compare the life that men created for himself and others in order to organize and control the individual. And that is what we experience in this game.

There are so many things to discuss about Thoreau. But I don’t want to spoil anything about both the game and his literary work. Because, as you may realize already, it is crucial for you to have a look at every single tree, flower and animal in this game to improve your perception about the nature and the society through Thoreau’s own eyes and words. 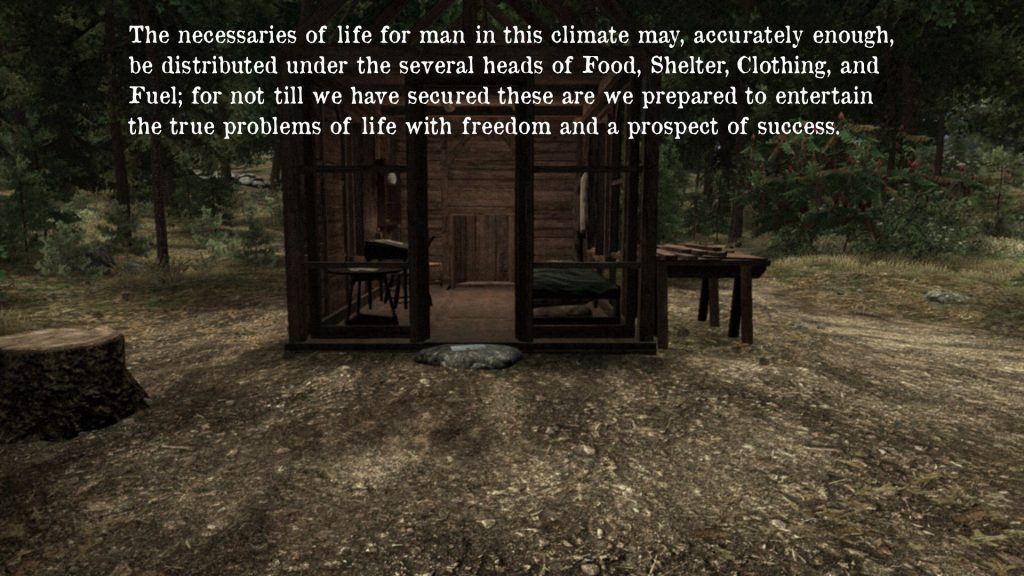 The first time I started the game, I was a little confused and lost to be honest. The game itself leaves you alone in the wilderness. You have to find your own way and discover your possibilities which can be a little disturbing at first. But after you realize that it is the main objective of the game, and after you get used to it, you start enjoying it.

The game starts at the beginning of the experiment that he held for two years next to the pond Walden in Concord, Massachusetts. You will start at your cabin, which, I should say, is a good imitation of the real one. You start exploring the area and you understand better the nature through Thoreau’s own words. And you hear many beautifully “composed” sentences while you’re hearing birds and looking at the reflection of sun on the lake Walden.

“Do what you love, know your own bone; gnaw at it, bury it, unearth it, and gnaw it still.“

The mechanics are simple. The main thing you should be focusing on is the ancient arrowheads lying on the floor or on rocks, planks etc. They are the items which will trigger the story telling and Thoreau will share his ideas and poetic lines with you. And frankly, except for some specific moments where they sound weird, I think the voice actors did a fantastic job.

Most of the time, these arrow heads appear when you feel inspired. To get inspiration, you should inspect around by holding the right click button on your mouse. By doing so, some specific items, areas, animals, plants etc will put an entry in your journal and you will progress in the game.

Before all, you start building your cabin by nailing some boards on your workbench. As you progress, you will see that your cabin is getting better. Also, you will have to keep it in a good shape during whole game. Moreover, you have to keep your food and fuel store full. To do so, you will discover many ways. You can fish on the lake or you can pick berries. You can even plant beans on a field north of your cabin.

Apart from shelter and fuel reserves, you will also need to tend your clothes and repair them from time to time. There are a couple of ways to do that in your cabin, in some camp sides around the lake, and in Concord. There are many ways to satisfy your basic needs in game. And I think you will find them easily and feel comfortable about the mechanics to be able to enjoy the game and to lose yourself in the nature. 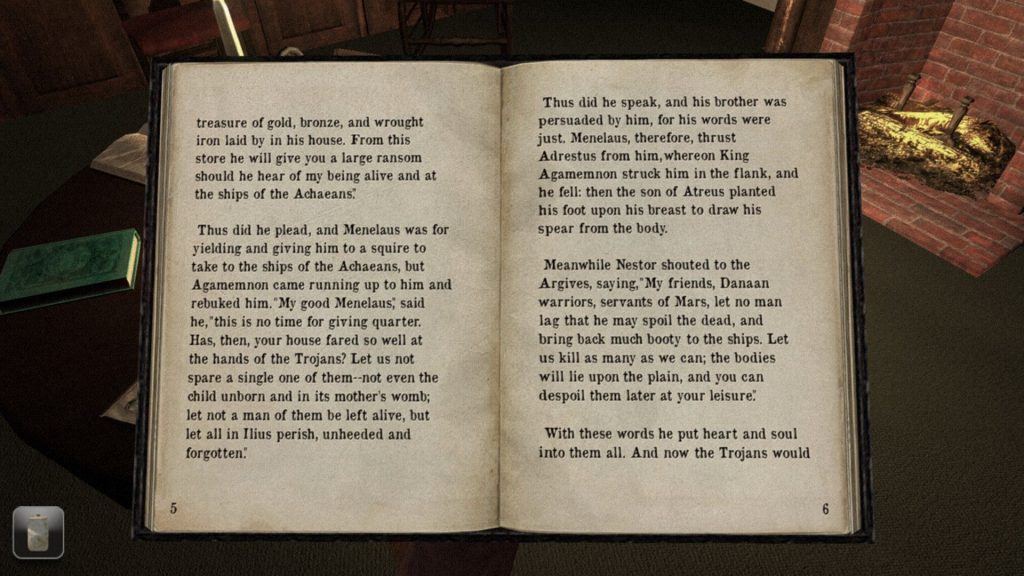 “A written word is choicest of relics. It is something at once more intimate with us and more universal than any other work of art.“

The UI, the area and the choices that you make in the game are pretty simple. From time to time, it made me wonder if it was possible to make it a little more complex. Just so that we can experience the hard part of being alone in the nature. But it never disturbed me to be honest.

One another thing that we should mention is the fact that you’re not actually all alone in there. As you make progress, you will discover the house of your friend, Emerson; you will go to Concord and check your mails; you will visit your parents’ house and the general store to buy food, fuel, clothes if necessary. Moreover, you have a chance to make money to be able to buy things and pay your taxes (if you want) in the General Store. The map you have in your journal has clear indications for every single important thing that you you have to see, discover or complete. But, whatever you do, wherever you go, you will always feel the need to go back to your cabin. And I think it’s fantastic that they managed to make us feel this way.

The reason why, I think, the developers made the mechanics as simple as they are is because they wanted us to focus on the experiment of Thoreau, the nature and on the literary aspect of the game which is incredibly satisfying. The letters you get from your sister, your friends or your colleagues for example. They contain poems, beautiful sentences and reflect the emotional side of Thoreau. The journal entries and the quotes that you’ll hear as you find more arrowheads will make you feel amazed. And that is by far the most important part of the game if you ask me. 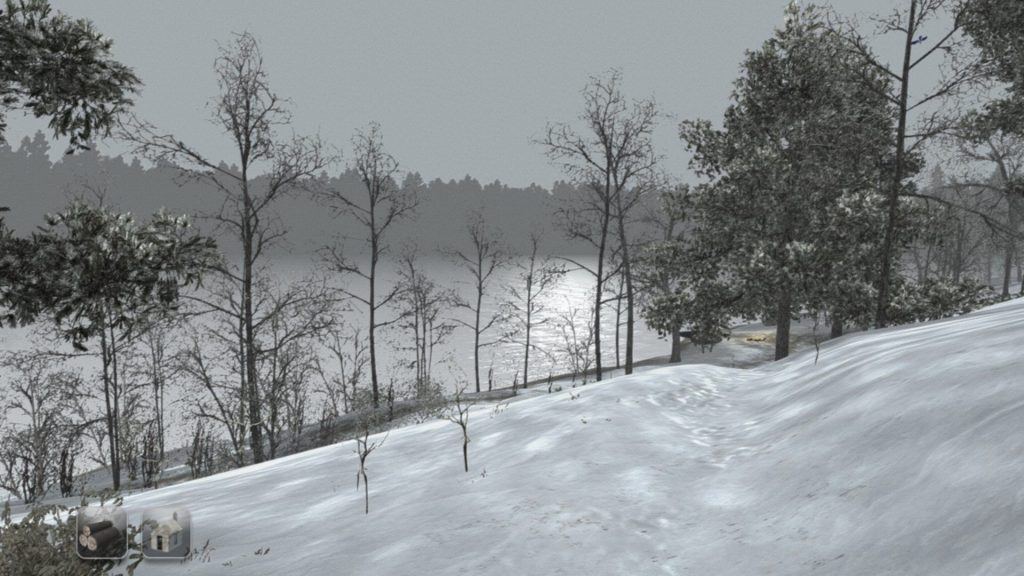 “Now in the late fall, nature begins to strip herself like an athlete, for her contest with her great antagonist Winter. In the bare trees and twigs I see such a display of muscle.”

Keeping all these positive things in mind, I would like to lay emphasis on some negative sides of Walden. The reason why I warned you at the very beginning of this page is because I wanted to make it clear that you can not expect from this game what you normally expect from another conventional survival or simulation game. The game is pretty linear and lack the excitement.

Also, there is nothing you should “fight for”, if it’s the right expression. The only thing you should do is to explore the area around Walden and get insights. Yes, the quotes and the literary aspect of the game is quite satisfying. And the graphics can reflect it pretty good. But you will always have the feeling of something is missing. And that feeling is the consequence of your gaming habits. You will never feel adrenaline or any excitement and you will feel missing something. But this is not the fault of the game to be honest.

Apart from that, if we talk about the story, it is pretty simple, but also confusing. Yes, the only story we are experiencing is the game itself; simply the experiences of Thoreau. But the journal entries are confusing and disorganized. And the feeling of progress is missing in the game. After you finish building your cabin and get the necessary improvements, you will feel stuck in the forest. The only thing you can do is to appreciate the nature’s beauty. At least, for that last part, the game is incredible! Here are some concrete examples of what I’ve been saying:

A couple of last words.

The technical side of the game is not even near any other contemporary games for sure. But the graphics and sounds are amazingly well implemented to the game. They complete the main objective of it alongside with the literature. As long as you keep in mind that the game’s aim is intellectual rather than visual, you will feel just fine.

Sounds are simply amazing. The music changes according to the season you’re in. The sounds of the animals will be the frosting on a delicious cake, believe me. And like other aspects of the game, you will always feel in the nature.

What I can say as my last words about the game is that if you like a peaceful, and calm game, and especially if you’re a literature fan, you should definitely give it a try. It will fulfill your expectations for sure. But do not expect a game which will excite you for hours. This is a game which will make you feel relaxed. Forget about challenges and being frustrated of failure. Just give yourself to the balance of the nature. You will realize when you harmonize yourself with her that you had spent hours next to the lake, only fishing. And you will feel much, much better!

Important note: Always keep it in mind that this game was, as its nature, not meant to satisfy the competitive/casual gamers who look for challenge or action. This is a peaceful, quiet and intellectual game made for, and could only be appreciated by, literature and nature lovers.

Walden, a game was reviewed thanks to a game copy provided by the publisher.

This is a game which will make you feel relaxed. Forget about challenges and being frustrated of failure. Just give yourself to the balance of the nature. You will realize when you harmonize yourself with her that you had spent hours next to the lake, only fishing. And you will feel much, much better!