Oh, it has been so long since a game left me with so many complicated thoughts and emotions, I don’t know what to do with my life now.

Before its launch, Rain World got the spotlights on itself with its cute and charming GIFs. Since it is official now that we have an irresistible sympathy for GIFs and cats, Videocult must have thought ‘Why not both?’. We don’t know where the “slug” idea came from.

Rain World is a survival platformer in which we control an adorable creature that resembles a white cat, yet the creature has features of a slug. We are the generation who is in love with CatDog and it reminded me of the early years of my savage cat, I fell in love with it. What a fool I was!

Rain World started with a cinematic which tells the story of a happy slugcat family. The sun was shining, there were rainbows, everyone was happy and satisfied with their adorable wild life. And, there came the rain.

I must warn you that Rain World will attach you to itself in an emotional level at the very beginning of the game. This game will attack to your feelings even if they were buried deep inside. This feeling was familiar and frustrating at the same time for me, because the opening cinematic reminded me of Ori and the Blind Forest. Ori and the Blind Forest was a restless emotional terminator that creates a weird obsession. The second I realized the resemblance, I started talking to the screen. This is the first game that made me talk to it except swearing. I said, ‘Please, don’t kill me inside.’

But there it was, on the screen. Our happy family dinner was spoiled by rain drops. On our way to seek shelter, we got separated and I fall into the bowels of earth. My ‘Aww’ shaded into a deep silent ‘Nooo’.

They should’ve named it ‘Tear World’. 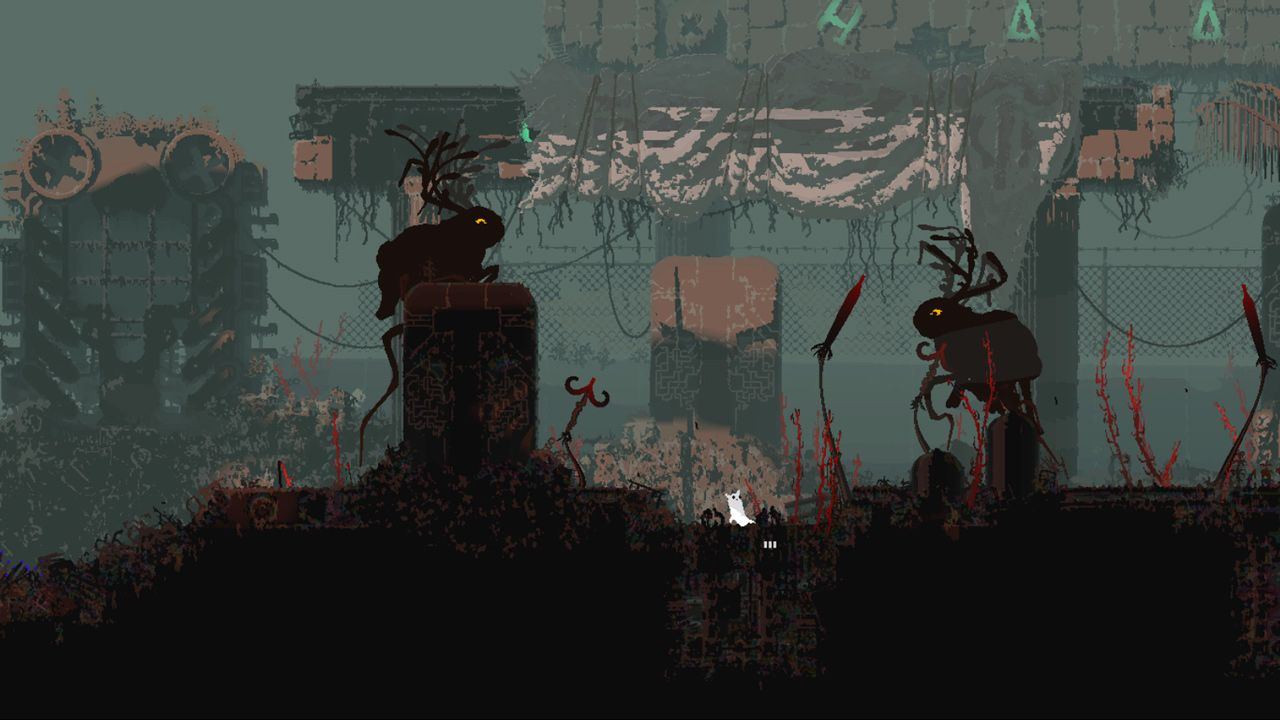 Into the bowels of earth, I descended. This is where the game revealed itself at full. Rain World has mesmerising and dark pixelated art design which you can’t resist and take 72 screenshots every minute. The environment of the game was as I expected; very hostile, dark, filthy, full of dangers and there I was as a fluffy cotton ball with no idea what to do. At this point, a weird designed creature came to my aid and with little hints, showed me how to play the game.

So far, Rain World earned my respect for both the saddening story and its charming pixelated art design; yet the controls were enough to drive me nuts. I went ahead and changed the key bindings to made it easier for me, but it kept being weird specially while jumping over obstacles. At this point, you must remember that I was against no enemies, I was not running from some freaky creature –I was just hanging on my own and trying to jump here and there, hardly.

The little helper creature that resembles Office Assistant Clippit, helped me by showing how to move through the pipes, how to find food, how to jump and jump higher but my arch enemy, the rain, was always there to ruin my adaptation process to this dirty underworld of mine. The game warned me that rain is coming and I need to seek shelter.

When I found my first safe room with the guidance of Clippit, I found out hibernation resets the day and creates a save. In order to hibernate in a safe room, you need food, and for food you need to hunt. Sleeping in a safe room consumes minimum of four food bars, so beware. It was not long before I, again, went out to explore the freakish underworld, escape from some leeches, catch some bugs to suppress hunger and caught in the rain. This time, I was unable to find a safe room since the rain was heavy, the sight went slowly darker and Slugcat was not jumping properly.

As a result of dying, I found myself in my first safe room since it was also the last room the game created a save. Along with that, any progress I’ve made after leaving this room was lost. The harsh truth hit my face, I was in a hazardous world and I was unable to protect myself. Rain World is ruthless and you can not make mistakes. I know that we are supposed to be weak and lonely while playing Rain World, but Slugcat was not designed to be a survivor.

Not for the faint hearted. 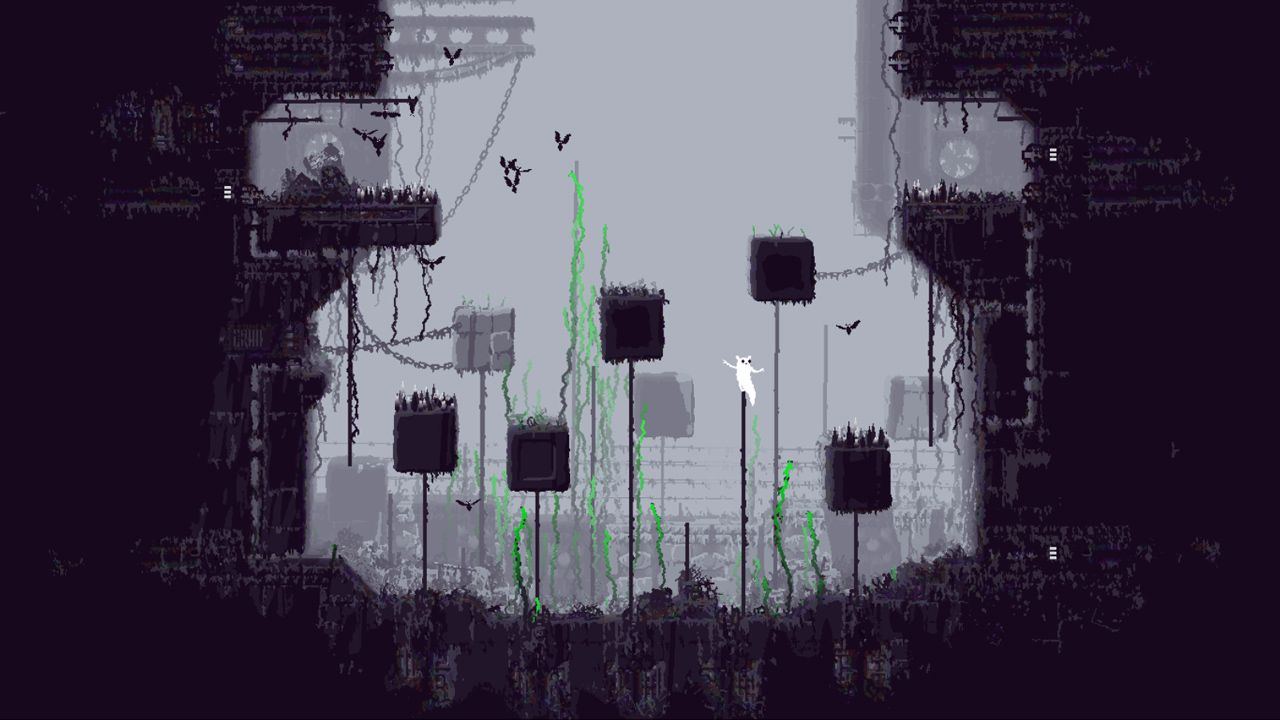 When the rain hits, it hits furiously and in this situation some unhandy controls may cause certain death and loss of progress. But, I am not saying that you are not supposed to play Rain World because it is a harsh experience, I am saying that if you want to enjoy Rain World you need to change your point of view.

If you want to enjoy Rain World, you need to focus on the great atmosphere, excellent choice of sound and soundtrack and the gameplay. If you fix your eyes on the next safe room and rush for it, you will certainly die and get frustrated. Rain World is a game for the ones who are not afraid of death and losing, a game for the ones who enjoy the beauty and high-pressured gameplay. Nevertheless, Rain World offers a fantastic experience with great visuals. It may take some time to figure out how to control your Slugcat, but following Clippit’s advice will ease the pain.

Rain World is like a work of Tim Burton with its shadowy and grievous atmosphere. Death after death, I came to a conclusion: If you are a rage quitter, you may have some hard time while playing Rain World since the death of Slugcat is nothing less than a stake in your chest. It is like an unforgiving death party where only Slugcat and I were invited.

Maybe thinking the Rain World as more of a survival and less of a platformer would be more accurate because the world of Slugcat is clearly full of terrors. With enemies spawning out of nowhere, with consuming food every time you sleep, with a restless rain which does not give you a moment to enjoy the view and its cruel karma feature, Rain World is a complete challenge.

The detailed and charming design of Rain World may create a decent first impression, but both story and gameplay will rip your heart out.

Sticks and stones may break my bones and the rain will totally kill me. Like every other thing in Rain World. If you are up to some challenging puzzle-platformer with extreme survivor elements, Rain World is what you are looking for.