When I start a walking simulation, the first thing I always do is to check my feet. I don’t know if it is something that you can relate, but it seems really important to me. When I started playing Waking the Glares, the first thing I did was of course checking my feet. But wait! I had none! Is this another crawling simulation?! I tried to move, I was walking, I moved on.

Waking the Glares: Chapters I & II hit Steam not long ago. The game is a walking simulator and self-exploring adventure by indie developer Wisefool Studio. It is planned to be a seven-chapter journey.

Even though the developers say that they don’t want to compare Waking the Glares to the other games around, competition is not something that you can avoid. There are so many successful walking simulators around like Gone Home, Everybody’s Gone to the Rapture, Dear Esther, etc., so you need to know where to invest your money. But, this is exactly where the breaking point is. You can’t really compare these games since this genre is meant to somehow touch your soul and every person has a different experience.

Waking the Glares lets you visit and explore beautiful sights around the world. Along the way you encounter with little and rather simple puzzles to solve. We are Downfall and our journey is actually a search for our lost memories.

You just turned your back for a second and there is a tree in your living room!

The first chapter begins in a blizzard in the middle of a street with no feet at all. At this point, I was shocked with some huge FPS drops. Walking simulations are not supposed to have FPS drops for the experience’s sake. Anyway, following the road, I arrived a house with creepy shutters. Is this a haunted house? Am I diving into a horror story? After I entered the house and took a look around, I saw that the house was indeed haunted by an enormous tree. 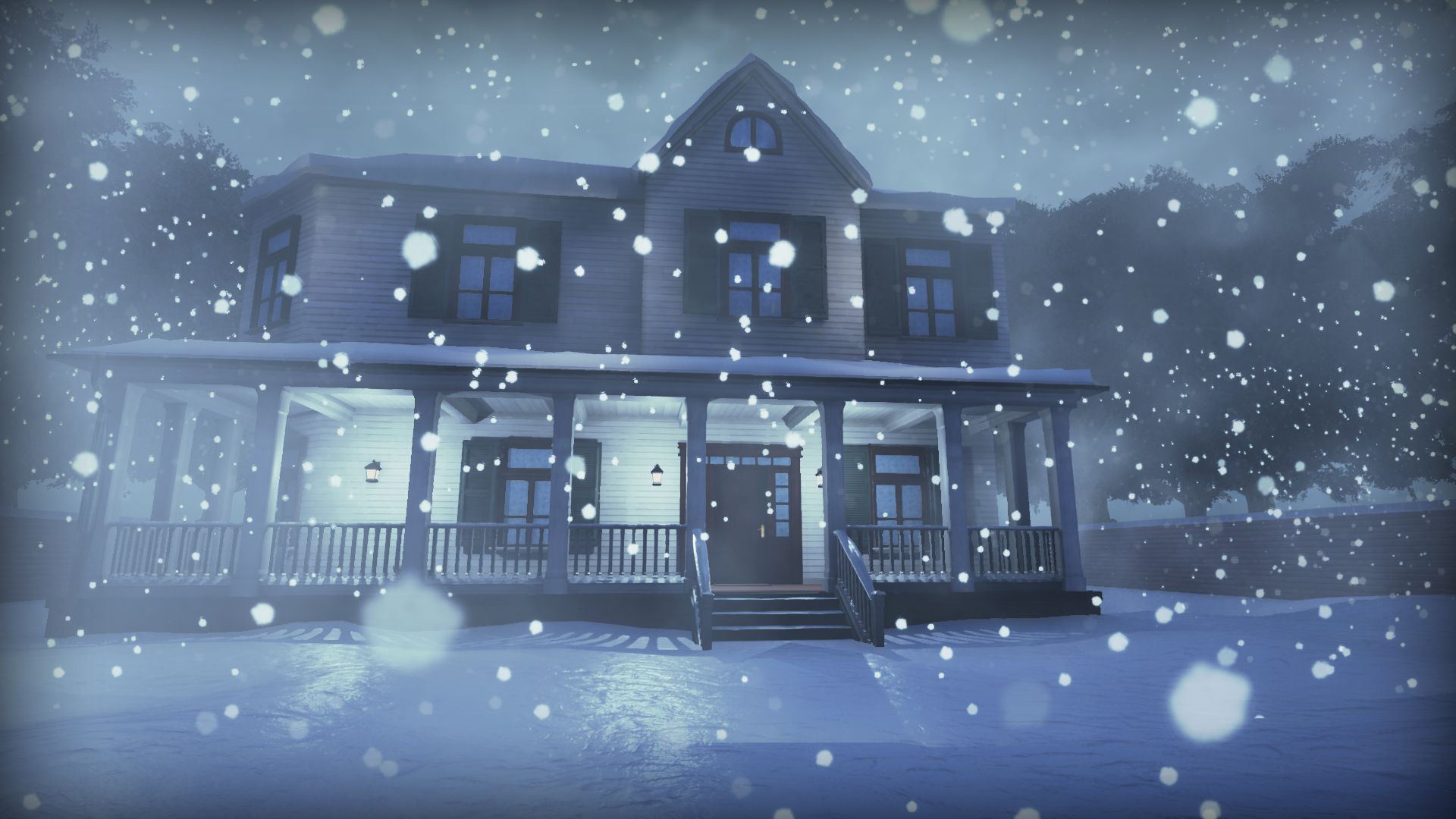 This is the part where the game reveals itself by talking to me. Some meaningful quotes that mentioning me and my journey. So, this tree must be my key to continue. Here I must say that Waking the Glares has a successful, deep and relatable narrative.

On the second floor, narrative got stronger. Every room had a cool design with a short story. I saw that the branches of the tree reached to every room and in every room, I had a mission. The mission was to give life. I was getting all emotional, yet there was one thing that dampened the mood: Waking the Glares needs some more polishing. The second floor brought out this issue since every room I walked in seemed a little bit off, out of place and needed a warm touch.

It can be said that the feeling is hearty yet the house feels incomplete, needs more polishing and more emotion. When it comes to the UI, it was a total failure that needs a fix. With disappearing doors, creepy hand animations (I couldn’t tell if it was my palm or back of my hand) along with an amazing soundtrack and beautiful paintings on the wall, I finished the first chapter.

This is where mannequins go when they die. 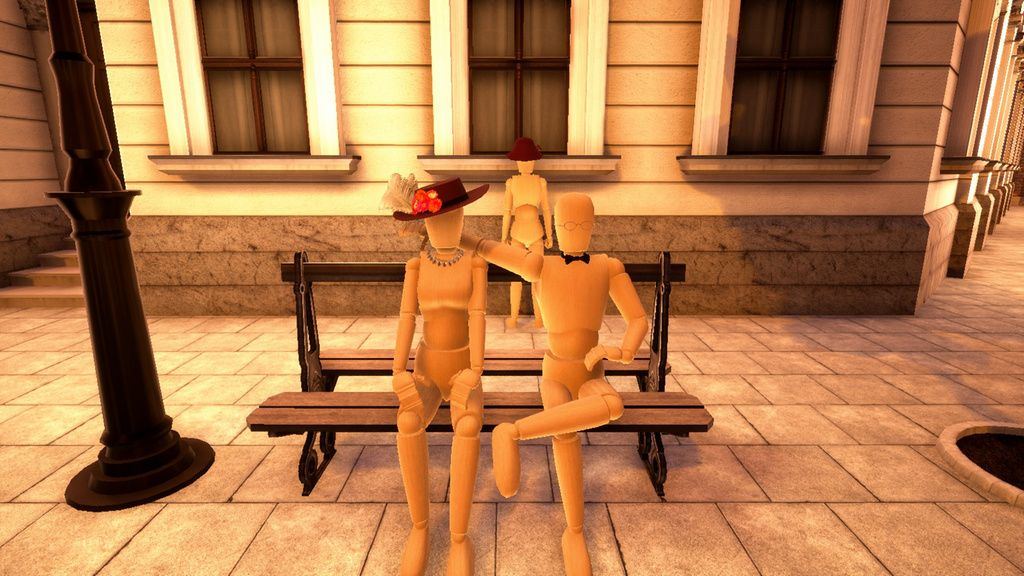 So, I begun Chapter II. On the contrary, Chapter II lets you explore outdoors with flying houses. There happens to be a medallion in my hand which I thought that would be the main item of the Chapter, yet it wasn’t. Then, best part of the second chapter came. I was on a boat, sailing on the river. I wish Waking the Glares could offer more views like that but I finally ended up in a Paris filled with mannequins.

Environments of Chapter II are rather fun compared to the Chapter I. With more puzzles and a crowded town square, the game changes into something else. Yet again, the tonelessness of the game offends the eye more in here. The plain, unsightly design and the numerous bugs became more obvious. I even saw a mannequin who was apparently having a seizure and another one who was trying to walk through a wall.

Anyhow, Chapter II offers various little quests which will give you an excuse to walk around and explore the town square. Nevertheless, the most important and charming part of the game seems to be the ending of this chapter. Despite some failures, Wisefool Studio managed to plant a successful plot twist at the end of the Chapter II.

It is clear that Waking the Glares has potential, though I can not shake the feeling that the game is not complete yet. Wisefool Studio should fix some technical issues, polish the game, give it a little more emotion which the story deserves and fill the blanks. Even though, I can say that Waking the Glares is a sincere work of effort with great intentions.

Playing the game with Oculus Rift is also an option but I wouldn’t want those mannequins look that real.

For the story's sake, it can be played, but beware of some annoying bugs and a stressful UI. We certainly hope that these problems will be fixed in the upcoming chapters.

Nominees of BAFTA Games Awards 2021 have been announced. This year, The Last of Us ...
By Haktan Yılmaz
46 mins ago

The ability to rent or purchase TV shows and movies will be removed from the ...
By Haktan Yılmaz
47 mins ago

Because of the pandemic, our lives got really boring and monotonous. But we should stay ...
By Yusuf Tarık Kayhan
10 hours ago

E3 2021 event has been canceled, Los Angeles City documents show. This was spotted after ...
By Haktan Yılmaz
1 day ago

When live streaming, you don’t forget to keep your microphone unmuted when not using it ...
By Haktan Yılmaz
1 day ago