Starpoint Gemini Warlords is a space sim with role-playing and strategy elements. The game combines 3D combat, 4X strategy and RPG gameplay elements. With Cycle of Warfare DLC, we are now able to lay our hands and eyes on the title and share a review with you, Warlords.

Starpoint Gemini Warlords’ story campaign puts us in the shoes of a Captain. We are one of the “exiles” who are living on the outskirts of Gemini. The game starts with a tutorial which shows us how to use the controls and our precious little ship. During the tutorial, we are to escort our faction’s brand new battleship, Icarus. We learn how to follow, scan and fire during this part of the game.

After you successfully escort the ship, some hostile forces attack and after some unfortunate events which seems like the results of your foolishness, you end up with a destroyed Icarus. Scanning the wreck of Icarus will reveal your brand new character as the pilot of it (a nice twist). After that point, we will play as the captain who is blamed for the destruction of the battleship and got demoted as a result of that. We will fight for our status and investigate the forces behind the destruction of Icarus during our gameplay.

Control your fleet, lead a Faction 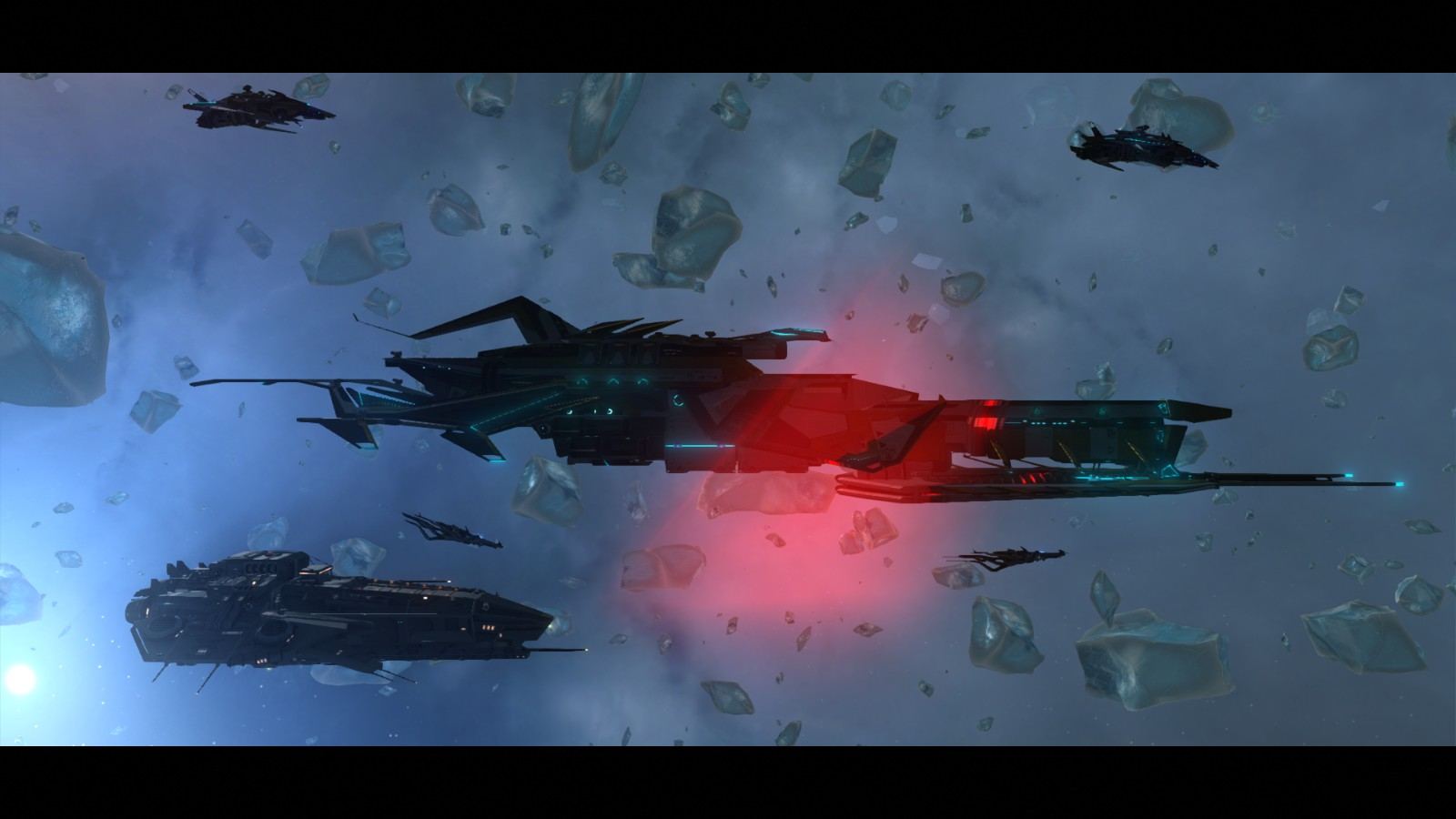 First things first, Starpoint Gemini Warlords has a weird control mechanism. It is not hard, it is just weird until you get used to it. After you get used to it, you realize that it is rather smooth and responsive. A,D,S,W buttons on your keyboard will move your ship horizontally and vertically. In order to go forward, you will use your mouse scroll. It is a little bit weird at first, but later it is just a piece of cake since you can always click on your target and choose follow from the menu.

This little menu becomes highly helpful since you can choose an action without any difficulty. You can lock on your target, follow it, fire at it, scan it and do whatever you need to do via this menu.

I’ve mentioned that a combat scene welcomes us at the very beginning of the game and during your gameplay, you will be always in combat. It is easy, enjoyable and colorful, if you ask me and offers a satisfying battle. The thing is that the game’s camera may cause you some problems since your view is fixed on your ship and locking on an enemy will give you a hard time. You can grapple and try not to lose sight of one of them, but it is a scary experience since they always have perfect accuracy. You may stand your ground or space, lock on your target and use your heavy weapons for an exact solution, yet you will run out of them sooner than you can imagine. There are also passive skills and active abilities which you will decide during the creation. As you level up, you can spend your skill points on them and take the upper hand during combat. I can say that this poor camera angle may disappoint you from time to time, yet the overall combat experience is fun and rewarding.

When you start to control a fleet, lead a Faction and start to explore the Gemini system by following your main quest and side quests, the real fun will begin. There are lots of missions and lots of planets to explore, and all of them offers great views to witness. During your journey and in the combat, your skills and abilities will matter. With skill points you received, you can upgrade your skills and abilities and this way you can guarantee a more solid gameplay. 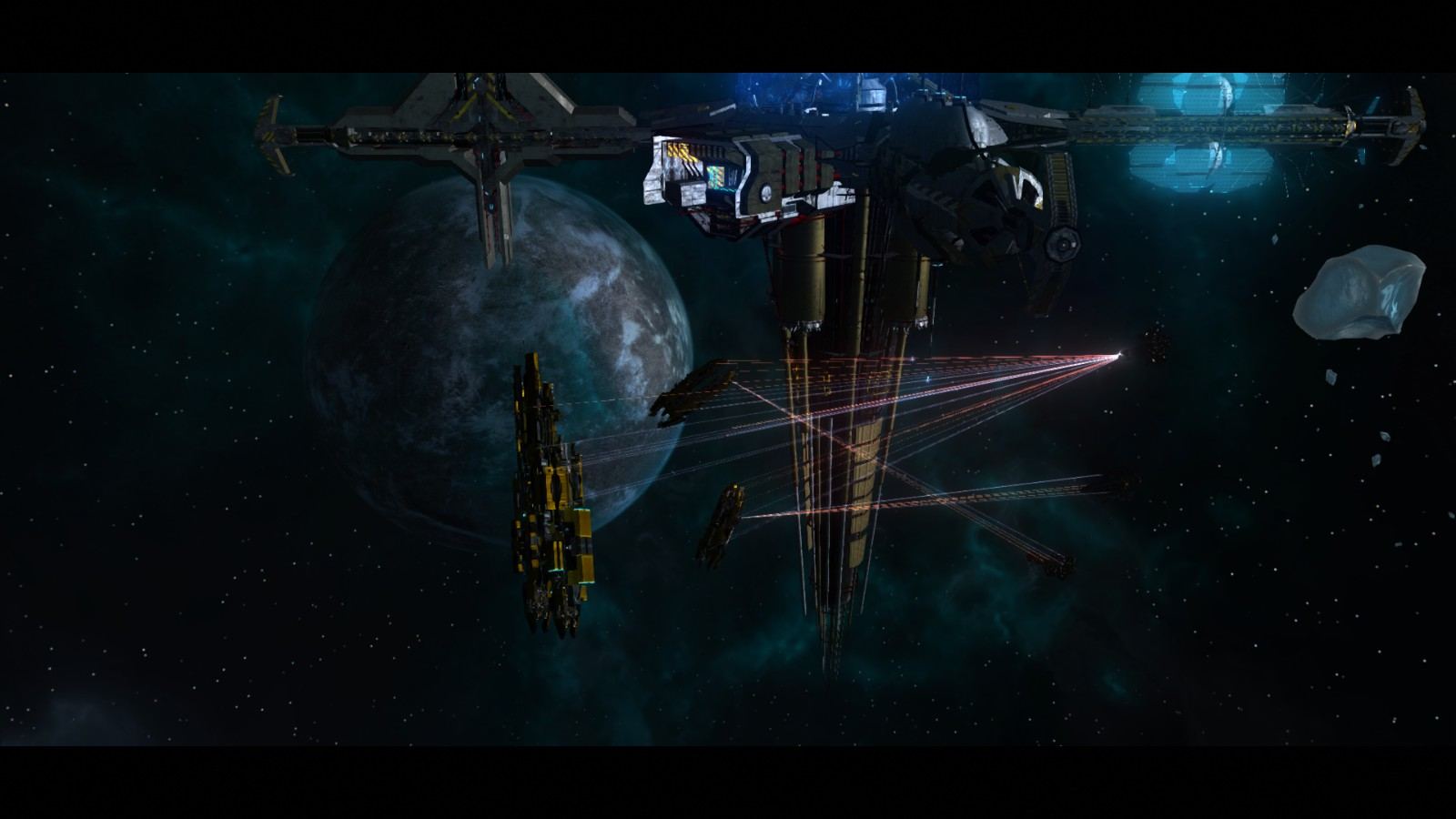 One of the most noteworthy parts of Starpoint Gemini Warlords is the things you can do to your ship. There is a huge hangar and there are tons of options to build and improve your ship.

Customizing your ship is so much fun! The game has a very detailed customization system which lets you touch and change all the bits and pieces. You can create the ship you’ve always dreamed of, upgrade it and admire it as much as you can. Apart from the customization screen, you won’t be able to see all the details in space, but you know how it looks and I think it is satisfying enough.

Your ship is not the only thing you can build and upgrade. You can also build headquarters with additional modules in order to achieve more advance weapons. This will all influence your territory and your fleet.

When it comes to visuals, I can say that Starpoint Gemini Warlords looks dashing, specially during combat with all lasers. Yet, I can not say that it was splendid. We’ve all seen better, it is the curse of our generation. Everything you see is pleasing to the eye and I believe it is enough for a game like this. But, when it comes to soundtrack, it amazed me from the moment I’ve started to play the game. 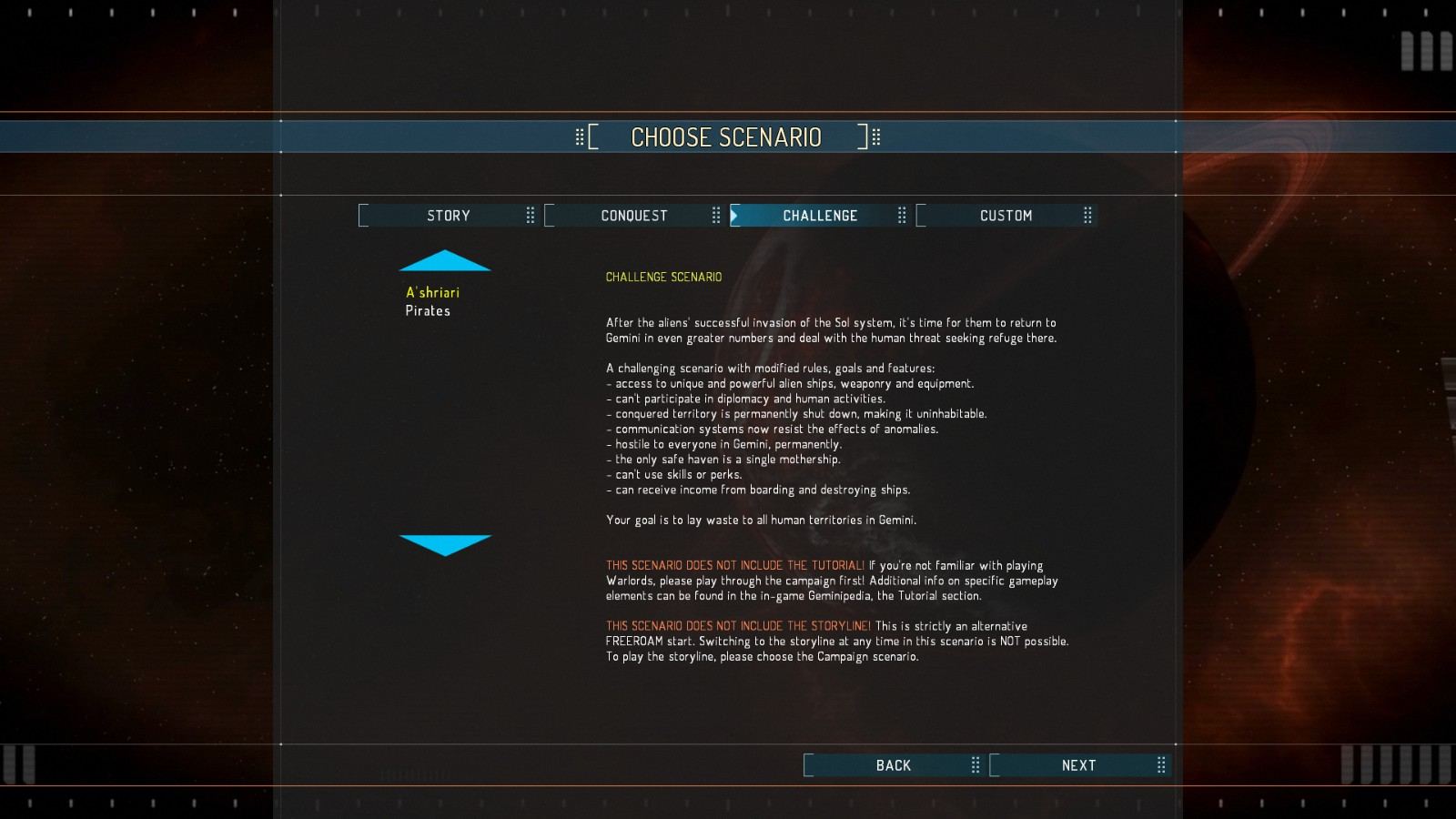 I guess it was enough information about the main title before jumping into the great additional content which launched for a short time ago.

The most important part of Cycle of Warfare DLC is that it introduces ‘fearless and brutal’ A’shriari faction to the game. While playing the story mode of Starpoint Gemini Warlords, our main enemy was from the Sol system. With Cycle of Warfare, we get to face the new invaders of the Gemini system, A’shriari.

You can now continue conquering Gemini system with three other factions; Iolian Pact, Korkyra and Outerlands. These three factions will work as we’ve mentioned before, yet you may want to try some new challenges. Cycle of Warfare also brings two challenge scenarios; A’shriari and privateer.

These factions bring a new point of view to the game and also changes the way we play the game. While Iolian Pact, Korkyra and Outerlands offer a similar gameplay to the story mode, A’shriari and privateer offer a more risky gameplay for experienced players. It is not easy to be a bad guy. 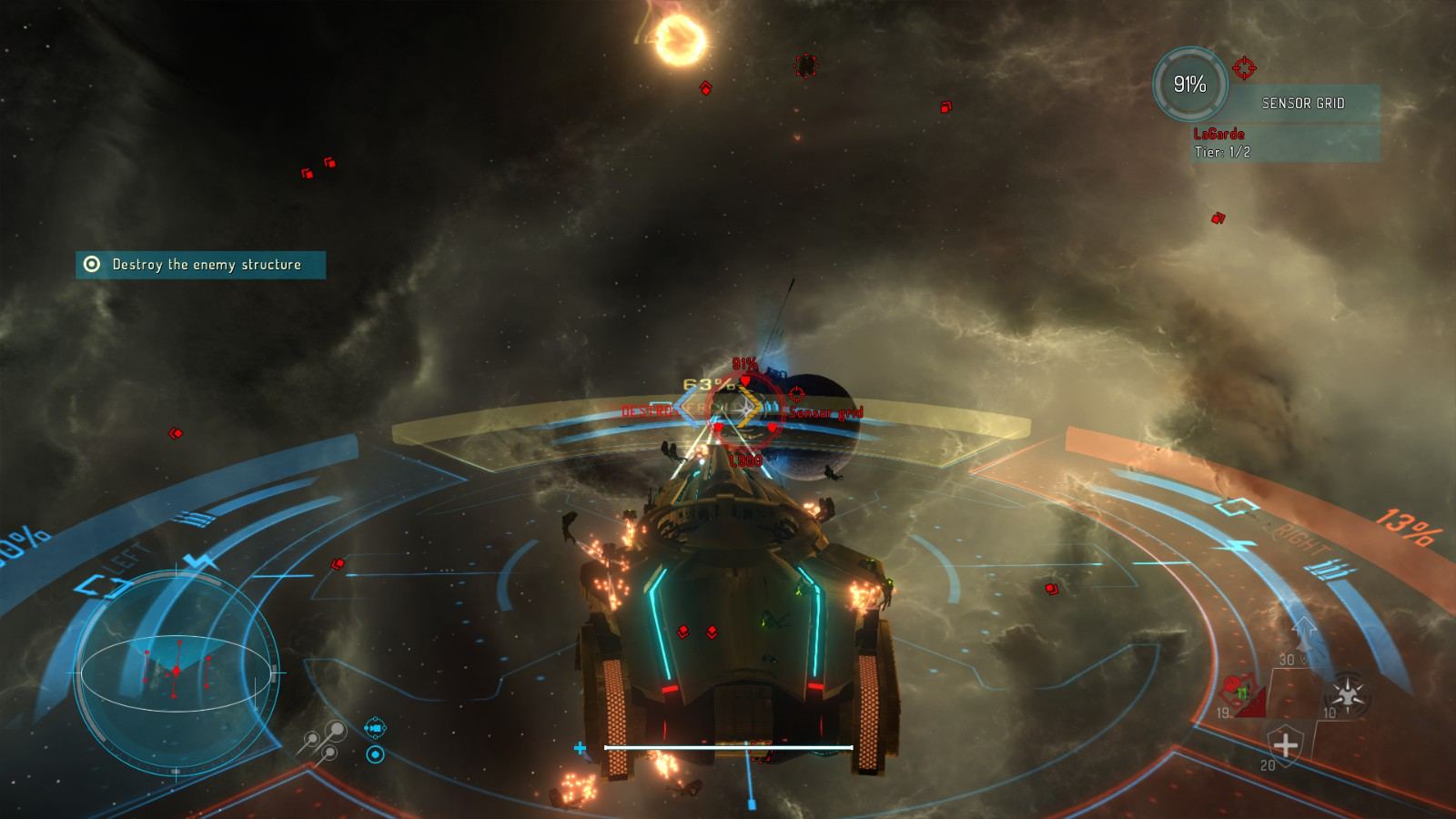 Also, there are new weapons added to the game along with more than 100 hours of gameplay. I am truly sorry that I did not have enough time to test or prove that, yet I can assure you that Cycle of Warfare feels like it doubled the game’s content. It feels like another game rather than a DLC. Letting me play as an alien race was a brilliant touch to the game, and I think it is what makes the DLC that important.

Overall, I am more than glad that I had a chance to lay my eyes and hands on Starpoint Gemini Warlords and its brand new DLC, Cycle of Warfare. If you’ve already played or still playing Starpoint Gemini Warlords, I highly recommend you to try out the Cycle of Warfare DLC since it brings so much to do and various gameplay styles to the main game. I can recommend this DLC even only for the A’shriari faction, yet there are more to it. It is a fresh start and it feels nice to have a giant mother ship.

Cycle of Warfare is now available on Steam, if you are up to challenge.

Starpoint Gemini Warlords: Cycle of Warfare was reviewed using the Steam key provided by the publisher.

If you are still playing Starpoint Gemini Warlords, I highly recommend you to try out the Cycle of Warfare DLC since it brings so much to do and various gameplay styles to the main game.

Resident Evil is a truly horrifying experience in all aspects but looks like this wasn’t ...
By Haktan Yılmaz
8 hours ago

A next-gen version for The Witcher 3 is set to release around this year, and ...
By Haktan Yılmaz
8 hours ago