Nidhogg 2, like its predecessor Nidhogg, offers fast-paced combat filled with guts, limbs and blood! After playing Nidhogg 2, I am overly satisfied, yet once again I know why I hate worms.

With Nidhogg 2, developer Messhof aims to expand Nighogg’s gameplay further. And, from the looks of it, it is a success. With new weapons, beautifully designed levels, character customization screen and splendid art design, Nighogg 2 is equally good.

I think it is the limbs

Why I hate worms remains a mystery to me and to my loved ones, yet it is not enough reason to stop me from playing Nidhogg 2. I think it is because they have no limbs. It always disturbs me for some reason. But, Nidhogg 2 has enough limbs to offer, if you know what I mean. Again, I got a chance to slay enemies, cut their throats and literally explode their heads through fast-paced combat. Who can say no to that?

Nidhogg 2 offers three modes to play; Arcade, Local and Online. With Arcade, we will go on. The main objective of the game is killing your way through the next screen by fighting your enemies, but they also take it as their duty to kill you and push you to the previous screen. They can also make you move away from the final scene which is where you must go. The wurm gotta eat.

Strip the flesh! Salt the wouuund!

Nidhogg 2 offers a wrathful combat system. The rage can only climb up and the savagery can only increase during this game. It looks dirty enough, even it is dirtier than you can imagine since it has a splendid pixelated art with such warm colors. But, there is only death and more death in the world of Nidhogg 2.

The weapons vary from a sword to a bow. You can even use a dagger, but I won’t recommend it since it is short and it is hard to defend yourself with it. It is not a game in which you can take a role of an assassin. The bow, on the other hand, offers a rather long range, but it feels odd to send arrows to your enemies like Legolas did in The Lord of the Rings. There are endless arrows, yet it works slow and is not a suitable weapon for fast-paced combat. The best one, I think, is the sword. The thicker one or the other one will be much better than the dagger or the bow since every weapon works differently. 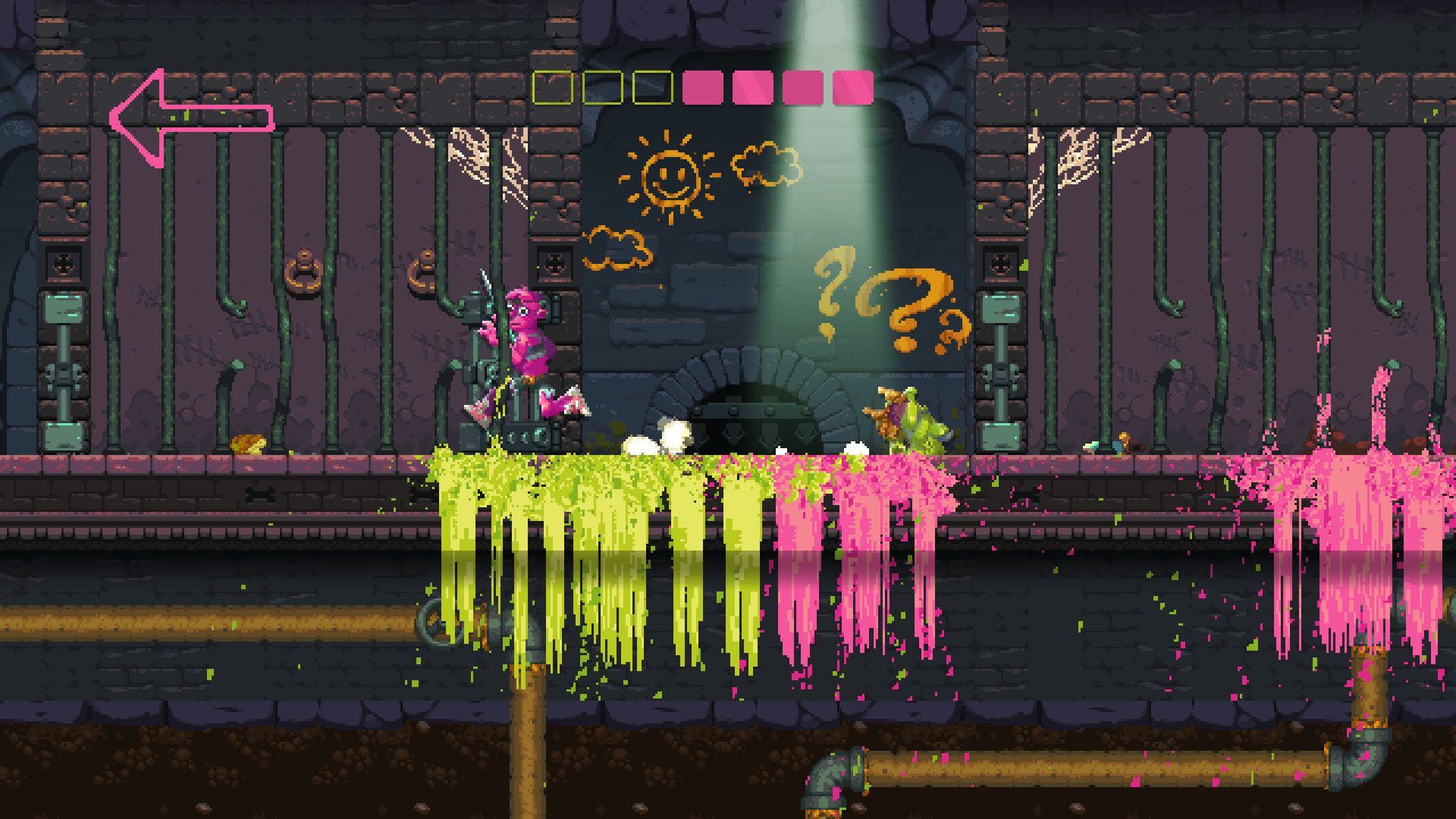 You can use your weapon at three different heights; head, torso and crotch. You can also throw your weapons to your enemies and they can do the same to you. At this point, I proved myself unsuccessful. Every time I did this, they hit me and every time I tried, I missed. Throwing your weapon will leave you empty-handed, but you can also grab a weapon from the floor. Oh and, your arms and legs work just fine. Even better than most of the weapons. Crushing a skull with your foot leaves a better taste in your mouth.

While moving forward, you can always pass your enemies without killing them. But, don’t think they will ignore you. A dagger to the back will finish you in that instant. No honor in this game and no shame.

Always keep in mind that when I said fast-paced, I mean it. Nidhogg 2 offers a very very fast combat which means everything happens in just two seconds. If you don’t defend yourself properly, you will probably die very often. Dying does not mean such a great deal since you will always respawn just a little back from where you were standing. You must always defend yourself and push your enemies forward in order to meet your lovely worm.

When you respawn, you may find yourself holding another weapon. To be honest, I’ve died a lot because of this feature. But, I must admit that it is a real challenge and I loved it. Killing enemies is not that hard and you can always fight your way through, but the weapon changes the gameplay and it means a great deal. Tournament Mode will let you choose your weapon order, but where is the surprise in that?!

Even though it makes you miss Nidhogg, Nidhogg 2 is still looking pretty good. A detailed pixelated art style will welcome you with such warm colors. It feels even weird smashing skulls when it is so beautiful back there. It is not simple, no, it is actually complicated and at some point may be eye-straining, but it is beautiful in a complicated way.

Level designs are pretty impressive, too. Every level is a portal to somewhere you can’t imagine. From the bowels of a worm and to above the clouds, level designs vary in a pleasing way. The original areas are rebuilt and more are added to the game. You may like to revisit them if you’ve enjoyed Nidhogg before.

Soundtracks, on the other hand, are splendid. Thanks to Mux Mool, Geotic, Doseone, Osborne, and Daedelus, every stage is more lively and enjoyable. Who wouldn’t like to torn their enemies to pieces while electronic music is playing? Well, I would.

I only regret one thing and it breaks my heart. Seems like I can’t take screenshots while playing this game on Steam and short cut keys doesn’t seem to work. This is why I used some other ways to take screenshots and I believe they may give you an idea about the game. But, during the combat, it was impossible to take one.

While playing Nidhogg 2, I encountered some bugs here and there. The AI seems to act weird at some points like the enemy doesn’t move or stuck at some certain point. But, there are no game-breaking bugs or crashes and nothing is enough to spoil the fun which the game offers.

The menu and character customization screen are sufficient for a game like this. You can change your characters’ color, hair and apparel. You can even add a mustache. But, when it comes to controls, you may want to spare a minute to change the key bindings. It feels a little weird when you are trying to attack with F key while you are jumping with G. Other than that, the controls are smooth.

Beyond anything else, Nidhogg 2 offers a great and fun gaming experience. Dying fifty times in a minute can be a little bit frustrating, yet you can’t stop laughing. Everything happens so fast like you can fall from the edge right after you kill your enemy and when you respawn, your enemy falls from the edge while charging at you. If you want to play the game with friends, I am sure you will have a great time while killing each other in such haste.

Nidhogg 2 will surely make you miss Nidhogg, yet it is really an advanced version of the previous game. It was fun before, and it is funnier than ever since now you can enjoy it with your friends with better visuals and new weapons. Nidhogg 2, with no doubt, is a ‘must play’ if you want to witness what really a face-paced game is.

Nidhogg 2 is now available on Steam and if you like what you saw and read, you can go ahead and take a look at it by visiting here.

Nidhogg 2 was reviewed using a Steam key provided by the publisher.

The hungry Wurm is back with Nidhogg 2 and I am more than glad! With better visuals and add-ons like new stages and weapons, Nidhogg 2 brings honor to its predecessor. The game offers brilliant fast-paced combat with hilarious and gruesome moments and this is exactly what I was expecting from it. Nidhogg 2 is a must if you want to spend some quality time full of laughter with your friends! Feed the big bad worm!