“When it comes to empathy, there’s no manual for that.”

The single fact that we know more about our solar system than Earth’s oceans, is a disturbing thing to imagine. In what year we’ll be able to discover all the unknown depths of an unfathomable body of salt and water; but in the year of 2019, humanity achieved at least to build laboratories and mining facilities on the ocean bed.

Honor Code’s debut psychological horror, Narcosis, starts out with a perfectly voiced-over monologue telling us how the company Oceanova is achieving big by mining methane in depths of the Pacific Ocean. As the protagonist, we go through some basic training and our story starts with a punch. A punch delivered by an immense tectonic force, around a Richter scale of 8 –I’m sure nobody would want to imagine being exposed to an earthquake when you have 3,5 kilometers of water between you and the sky.

After that, well, I won’t spoil the fun. Even thought of not telling about the earthquake.

Narcosis does two things flawless: Creating a beautiful & haunting atmosphere and telling a great story. The other elements has their flaws, we’ll come to that; but the narrative… It was exquisite. Even if you don’t like the genre, you should give it a try for the sake of its perfect ending.

As for the atmosphere, did you like Cryostasis? I cannot relate to a certain element (except frozen methane textures), but the tone  of Narcosis reminded me Cryostasis a lot. Loneliness, a deep sense of uneasiness, hopelessness. It all comes in a beautifully designed package. And also, as an “unreliable” protagonist, the suspense is always at its peak: Because you can never be sure of what to expect in the next room, because you gradually go insane in your journey you are making under tons and tons of dark water… 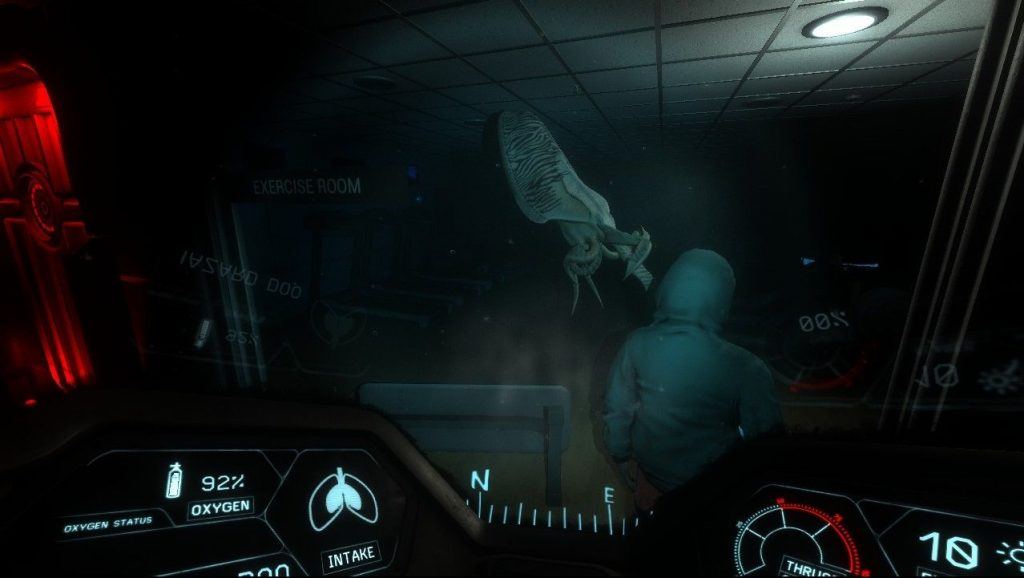 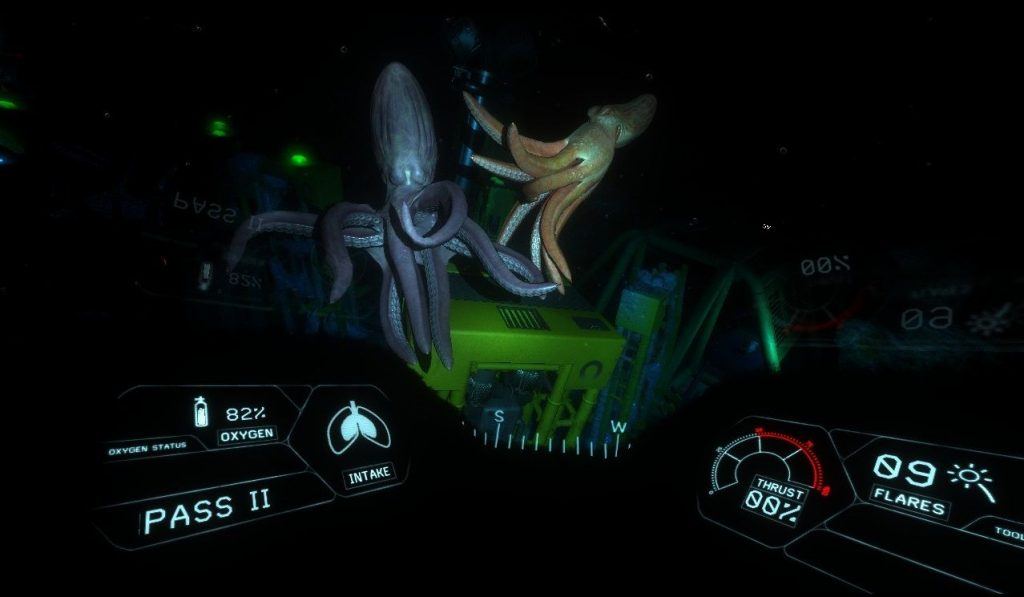 …In which, some deep sea monsters dwell; those we generally see only in weird documentaries. While being non-fictional; one of them, a great octopus is on the edge of being a myth. But who knows? All those “Kraken” stories should have some  point, at least. Anyway, these creatures; sometimes a giant spidercrab that wants you to stand the f*** away, or a cuttlefish that wants to cuddle the f*** out of your face consist the action part of Narcosis. While being a little unresponsive and slow, these sections surely ascertains the distinction of Narcosis from other walking simulators. We fight back. Slowly, but somewhat realistically, we fight back –with consequences: Every fight increases your oxygen use drastically. And in this game, you don’t have a health bar, instead you have to look out for your oxygen resources. Because, you know, you are in a high-pressure suit which looks like a small submarine from the outside and is hard to puncture (except for spidercrabs).

Gameplay of Narcosis seems a little bit off at the first glance, but in time, you realize that this feeling is a deliberate design choice. Not being able to look down, for example, may annoy some players; but in that enormous suit, you shouldn’t be able to, realistically. This inability of movement makes some parts of the game harder and tenser  than usual, and that’s a good thing in my opinion. Also, the control scheme is a bit different from other first person games. You don’t control the character’s body as a whole, but as two parts: Mouse to move your head, keyboard to move your suit. This feels like you are driving  the suit and it is a fantastic experience when you get used to it. It also makes the VR experience exquisite, I’ve heard. I don’t have a VR device. I am broke. Ehrm.

Unfathomable Depths of the Unity Engine

Let’s talk about the graphics shall we? Well, first, I have a screenshot gallery for you, picked by my own hands. Sorry if the graphics seem a little potato quality.

Hello guys! Thanks for the experience.

“Psst! I have some goods that may interest you.”

Turning back may be a good choice.

Did you like them? Well, technically speaking, Narcosis’ visuals were not “shiny” like SOMA, but they had a delicate simplicity. SOMA, for its setting, needed those visual effects; but Narcosis is based on a very normal  story in which real  people were trying to find their way under the ocean. And visually, Narcosis achieved that simplicity -again- very realistically. Especially when rambling about the crew quarters, you’ll surely appreciate the effort put into those rooms. The detail is stunning. Books, posters, toys, references to other games, desktops, notes; all in very good detail. So good that I’ve desperately tried to pick them up at the beginning.

As for the sound, one of the most important aspects of a horror game, let me explain by an example: I was in a room, trying to route power to an elevator. I turned on the power, but while turning it on, I realized that I’ve been hearing a crackling noise like teeth grinding. Some of you may remember; in Amnesia, our character was starting to grind his teeth if you let him stay in the shadows too long. This time, in that room with the elevator, I heard a noise resembling that, but this time, it was not my  teeth. It was the cuttlefish who wanted to grab me from behind. That noise made me grind my own teeth after that encounter. Only bad thing about the sounds that they could be more filtered out, to support the underwater atmosphere. But generally, the flowing sound of water around your suit will provide that feeling for you.

I was thinking of a conclusion but I realized that I forgot a lot of things about Narcosis. For example, it has the most well-designed main menu that I’ve seen in a long while. It is designed as the small screen on your suit’s left arm, from where you can get access to all personnel data of your colleagues. And they have a lot to tell, if you manage to find their personal belongings on your journey. Surely it is an element to increase the possibility to replay the game. There is also a flare mechanic that you’ll be using a lot, especially travelling through weird platforming levels. Yes, there are platforming levels; and no, I did not forget to tell you about them in details. It would ruin the joy.

Well, the main conclusion about Narcosis is this: The more I tell you about this game, it’s more possible that I would ruin the joy you’ll get from the game. I even told at the beginning that it has its flaws but in the writing process, I forgot about them. They vanished under the heaviness of the experience. In all aspects, this is a beautiful walking simulator with a few tricks to differentiate itself from the other games in this genre. I can easily say that Narcosis was the best walking simulator I’ve played since SOMA. If you liked SOMA, you must play it. And no, it is nothing like SOMA. You’ll see, trust me.

Narcosis will put you through an unforgettable journey. Play it, recommend it. A good storyteller is hard to find, so don't lose the chance.